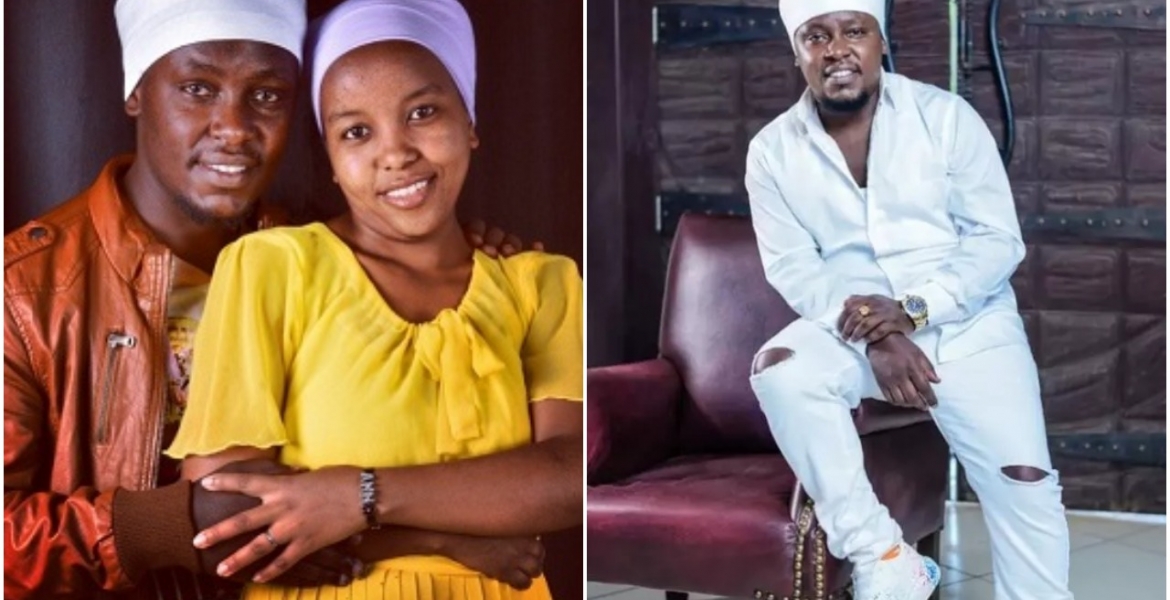 Through Facebook, Aaron revealed he got married on January 2nd, but did not share the identity of his new spouse or her photos.

The ‘Kiriro’ hitmaker was previously married to Ann Shiko and the two were blessed with four children, but is alleged that he abandoned his family a few months after he moved to the US to perform and minister the word of God.

In a recent interview with Kenya Diaspora Media, his estranged wife said Aaron cut communication with her barely three months after he landed in Boston.

“He started acting funny. He would not pick up my calls and whenever he did, he had very unkind words for me. After a while, there was no communication as he had blocked me,” she said.

Shiko added that he also stopped sending money, resulting in her struggling to raise school fees for their kids, rent, food, and other basic needs.

A year later, Aaron returned to the country without her knowledge and the two accidentally met at a funeral at Lang’ata Cemetery. After the burial, Aaron allegedly went to his parent’s home in Elburgon, Nakuru County.

“Together with my children, we waited and waited. He didn’t come. We saw him after two weeks when he came to pick up his belongings. He took his clothes and even the TV that our kids used to watch,” she recalled.

Shiko said her attempts to know what transpired were futile as Aaron would not listen to her even when church elders tried to intervene.

“I tried to beg him for forgiveness for things I could have done without knowing I was hurting him but all was in vain. Up to date, I don’t know the reason he left,” she said.

Shiko, a musician, currently sells cars at a showroom along Kiambu Road, and says she is ready to remarry if God sends her a suitor.

Never rejoice over the tears of a married woman if there were no reason for parting,karma is real.

Kiambu road and US based.

Njoki, he had to remarry so as to get I-485 and adjust status

You do not abandon your kids. That is your flesh and blood. The tears they cry will come to hurt you.

Cannot get anything going until he divorces the first wife. Not all clear!

Whatever transpired between them is ok.
But, you cannot divorce your own kids...PERIOD.
My theory is always simple...please work things out...
If you're walking away because some lady looks prettier than your wife, make yours pretty. Don't forget MWANAMKE NI NGUO.
My view is,if SHIKO did meds around...you two could have worked things out...but there might be more to the story.

TIT for TAT is the best revenge in this situation.Shiko/Wanjiku should contact the US immigration dept directly or via the US Embassy in Kenya and inform them of her marriage status with fake Allan/Aroan.She must inform them that the guy just left and they never divorced.He might be having divorce papers from "Grogan/Kirinyaga Rd" court which Wanjiku can easily proof.From there angoje matokeo as she has arleady lost him to another PENGENYE and has nothing to loose.

Njoki can contact the US embassy in Kenya to get his US marriage annulled on the basis of marrying another woman while he is still married to her! Americans do not entertain polygamy! His green card will be easily revoked and the gut deported back to Kenya! It is that simple because he is not providing to his family in Kenya.

Just like a useless jealous in your thinking @ceneca! He deserted his kids and lied to his wife! The children have been going without food and almost to be evicted! I know you are a 4th wife so you can’t see anything wrong here!

So you expect mokorino to divorce his children? Stop makingNyanza people look bad!

Everything in your small head is dollars @seneca! You ought to be ashamed of your mixed thought process! No wonder you deserted your kids too! We will turn you in too!

Mukuru is engaging in polygamy against the US laws! He has also deserted his wife and children and is not providing child support. He can be jailed in the US for neglecting his own children!

Shiku can take control of this ship and guide it to any destination she wants. Mukurino must already have lied on his status adjustment paperwork which puts him at risk of perjury.

The paperwork he signed must have indicated that he was not married to any other woman. That simply means he committed perjury himself by telling a lie. Mokorino - you lied to the American authorities and they will get you deported very soon!

He should provide for his children, then relocate to Utah and live with the Mormons. Mormons are polygamists....

You are no longer in the bush @ mokorino! The rule of law lives in America! America will make sure you support those kids you left starving in Kenya while you have been having fun with your new wife!

The best mokorino can do now is turn himself in to a police station to be booked for practicing polygamy in the American soil and for neglecting 4 children and a wife he left behind in Kenya!

Kiremba kia riuwa. Mukurinu whoever advised you mislead you. Lawyer up because you can be thrown into prison anytime.

@kenya: what is, “kiremba Kia riuwa”??? Does it mean the dude is living a beautiful life in America with his new side kick?

You all did not listen to 1st wife story. They were never legally married Aaron smuggled her aka come we stay

Liz sounds like a PENGENYE owner herself who does not know that COME WE STAY and TRADITIONAL marriages are recognized by Kenyan law.She might also be the husband snatcher in this case.

So in your small mind he should divorce his 4 children too?? Why not tell to man up and provide support to his children?

My heart skipped a bit the moment I read that wa githomo even took away the TV his 4 children used to watch.

He sure did take away the tube from the kids and Kenyans in Massachusetts are falling head over heels for this useless mokorino singer!

His childish actions just shattered his mokorino music career! How do you desert you kids, no food, take away the Tv, no rent money and still call oneself a damn man? Give that damn tv back to the kids you damn fool!

Si ndio kabisa! He is coming to your house to save you tonight!