"I Was Not Accepted": Dr. Samuel Njenga Explains Why He Chose to Invest in Kenya Instead of the UK 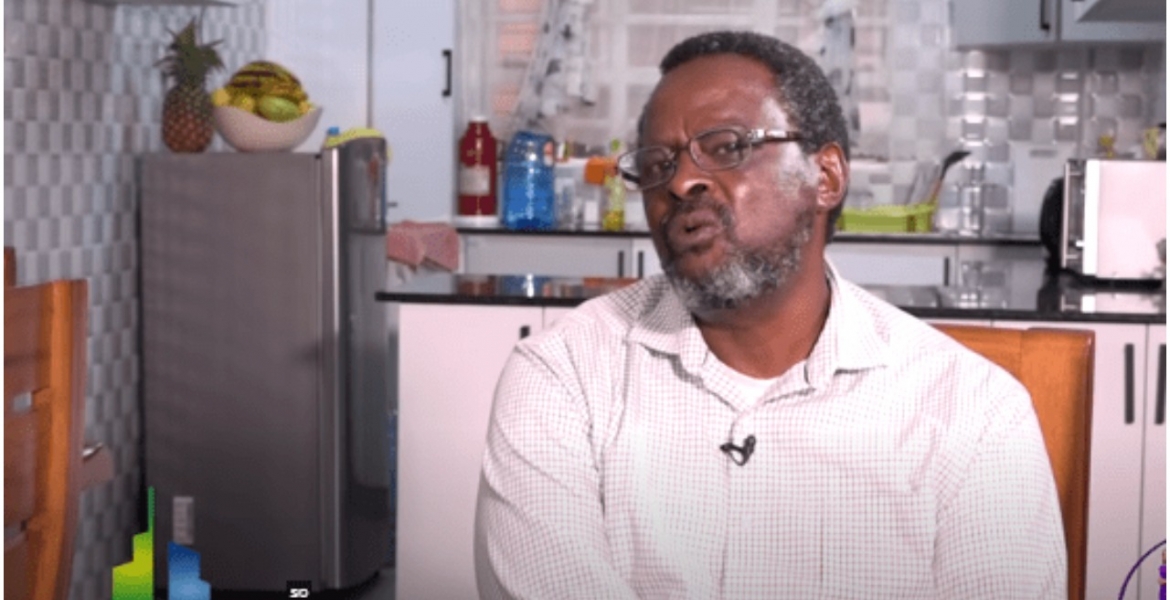 Kenyan pastor Dr. Samuel Njenga has opened up on why he has not invested in the UK despite living there for three decades.

Njenga was initially keen on investing in the UK, but he changed his mind due to how the systems treated him and people of color. Instead, he chose to invest back in Kenya where he feels accepted.

“What made me think of investing back home was, if you travel to a place and you are not accepted, you will be foolish to invest there,” Njenga said on Metha Ya Kagoni YouTube show.

He added: “When I saw I am not accepted here; I had to think of my country where I am accepted. I said I would plow back my money home. So who loses? It is the host country.”

Njenga, who is in his 60s, says he started preparing for retirement when in his 30s. He moved to the UK on a visitor’s visa in 1990 when immigration rules were not as strict as they are today.

Njenga, who was born and raised in Dagoretti, Nairobi, decided to stay in the UK where he studied theology and later became a reverend at the Church of England.

While at the theology school, he would work at night and attend classes during the day. He had just met his wife and had their first kid.

Njenga, who describes life abroad as “fast-paced” and “draining”, says Kenyans in the diaspora must have discipline to make it in life.

Another 'Mkenya Halisi', being economical with the truth about life abroad. He went to the UK as a Visitor, and when the Visitor's visa expired, he legally did not have any documents to prove who he was. And in Western Societies, which are free from corruption, you cannot transact anything without documents. While I agree that racism is real, it does not deny you an opportunity. Only your legal status does.

@settle nomad why always negative reaction? if you live abroad you know exactly what he means . personally i went to Germany to learn german by then we did not need a visa . after my study I applied for work. I was given a form for an employer willing to employ me to sign and i found one I returned to labour office i was given work permit.After 3 years i was given an unlimited staying permit It was easier those days and much easier to get a decent job depending on proffesion and experience . It changed when more people from all over started immigrating including criminals on falsified passports . the main ones were Somalis buying Kenyan passports that is when we could no longer travel visa free to Germany, commonwealth countries among others

Why live where you are not accepted for three decades? Just say you don't have money to invest in UK.

You work and show your work to get funds dummy. I have done research for US Army before so I know.

This one is not one of us (Kikuyus). Many have invested and are making some fortune in diaspora. Apendwe au asipendwe biashara Mkikuyu atafungua bora customers

Pastor Dr. Samuel Njenga...first of all you got there extended your visa legally or illegally...I'm not judging. We have to hustle. But don't try to justify ignorance just because you are heading back home. You made your money in UK..at least do your deal diligence and please tell the Kenyans the truth...please don't bite the hand that feeds you.

Wonderful people is it fair for pastor Dr. Samuel Njenga "I Was Not Accepted". He was in UK 30yrs and working there for all those year so why say this for christ sake? If us black are not accepted by white people wherever we are,pack and head back to kenya instead of keep blaming white people, you can at your own free will, head back to kenya and do not wait after 55year to come and tell stories of how you were not accepted. This is wrong at all level and let learn to tell the truth.

The pastor is insecure, misleading others, childish and he should make a public apology over the stupid comments he made on YouTube!

I don’t think his mother ever accepted him to even want to feel accepted n a country he went to visit and broke the immigration laws by over staying there! He is just a foolish man!

Funny enough doctor Njenga has lived in a country he felt not accepted for over 30 years, while at the same time using the proceeds of his income there to invest in Kenya! That is total hypocrisy to emanate from a man who serves the Lord! It is very unkind of him to address his new found country in those negative terms!

Please sir! Don’t take Kenyans fir being fools by selling done carcass and baloney to all of us! You should have returned to Kenya the moment your feelings of not being accepted emerged.

At times the way a man looks also the brains look the same! Is this guy a person to listen to his advise? I don’t think so!

He seems to suffer some stupid inferiority complex deep inside hjj in s heart! He is now too old to even attempt to change him!

No wonder he lives in Camden part of London where the crime rate is the highest in the world and Kenyans kill each other there on a broad day light! This is what he sees every day cops chasing criminals there hence not feeling wanted and accepted.

I have never heard those dirty words from a kikuyu man. This is one is totally lost in his foolish bitterness and failures in life! Even God won’t reward such a dying mentality.

Well well....I thought that's the truth ...at least for me it is. He's paid taxes in the UK....he has the liberty to invest where he feels more welcome. Go Njenga... jienjoy ulipo!

retirement age in Britain will force not to have a business.

I think it's disingenuous to claim you are moving to Kenya due to not being accepted. You lived for 30 years abroad and earned enough to invest and become a shill for AMG. If you hated the lack of acceptance so much, you should have decamped back to Kenya when your visa expired. Personally, I want to move back not because I'm not accepted but because most of my family is in Kenya and I enjoy being with them. I don't plan on giving up my US citizenship - it didn't come cheap,I plan to collect my SS and it gives me options. I'm curious if you kept your UK residency or citizenship. If so, then I would say you aren't being very honest.

Njenga lived in the UK since the income is higher and after 30 years he has chosen to go and live in Kenya . He can afford to go and live leisurely . after all if one has money it is easier to spend your retirement in your home than being sent to old peoples homes incase one cannot care for oneself . it is very expensive to employ house help and who want to change diapers or bathe an old being.

@Norah I agree having a retirement home in the Jamhuri is cheaper and family is everywhere - that is after all my plan. I have a good idea what I will have monthly with my 401k and other investments He is just leaving out a lot. What is his connection to AMG, is he being paid by AMG, is AMG simply a conduit to separate you(diasporan) from your money, if the lack of acceptance was so disturbing, did he keep his residency or citizenship after leaving? I'm keeping my US citizenship because the unspoken fact is it gives you more options. Life abroad is not easy but if you aren't rich or rich adjacent in Kenya, life is hard. He was accepted otherwise he would have been back in Kenya quick

Welcome home bwana njenga.Yes u can live somewhere for many years n don’t get accepted?Mayb u have small kids,u cannot just pack n go/Mayb u have a wife who don’t feel like going back home/mayb haunjanjipanga financially Hata kama tge host country is Shit you keep pushing yourself mpaka that day u will return?So this many refugees diasporas who r commenting jamaa angerudi should understand juu am very sure even them dream of going back home ni vile majority hawana kakitu??Personally I lived 8 years n I was fed up by maisha huko from day 1 but I kept pushing myself n one day I decided mbeca/money is never enough I packed n bot business class ticket.I don’t miss brainwashed lies modern slavery Majuu life.N I know many wish they can come back sweet home jamhuri?So Karibu nyumbani mr njenga Wacha wenye wamedecide kuishi majuu waishi nawanunue makaburi zao huko sio kusumbua wakenya walete miili zao nyumbani wakikufa.If u really love majuu get buried there too.

Those who want to stay let them scout for a ka-good nursing home where their behindd will be cleaned. I am told the ratio is one nursing assistant to 16 old people. You will be lucky to even get your behind washed leave alone get out of bed or be fed. In Kenya, you can hire one person to take care of you. One who will make sure you go outside to enjoy the 🌞 sun. Let those who want to ropoka do so for they know not what awaits them.

For all the hustlers out there in diaspora, especially the old USA. Stay put. Do your math. If you have your papers, chill out. Work and let work. At 67, relocate back to Jamhuri. It is your mamaland, no one owns it, even though this individual thinks he owns your mamaland. Your 401K and social security benefits will sustain you till death. Even if you don't have 401K,at least $1,200 in SS is better than hustling to get tenants in your tuploti. And that is $1,200 till you die. This dude need to chill out. You don't own Kenya my man or is it my woman?

You're right but $1200pm is actually the average. If you are like many who have worked here for a long time, it will be up to 3x that number which is a nice income in the Jamhuri. You don't have to sell chickens, eggs or milk non existant Friesians or Holsteins. You can find out where you stand here - https://www.ssa.gov/myaccount/

Kenya is a beautiful country but can also get boring after sometime.

I think the lack of income is what took you to the UK. Am not going to judge you for your choices but it seems to me that you chose to come back to Kenya when your income improved.

There is no problem with that buttell people the truth. The whole argument of being accepted or respected in the UKis not very agreeable.