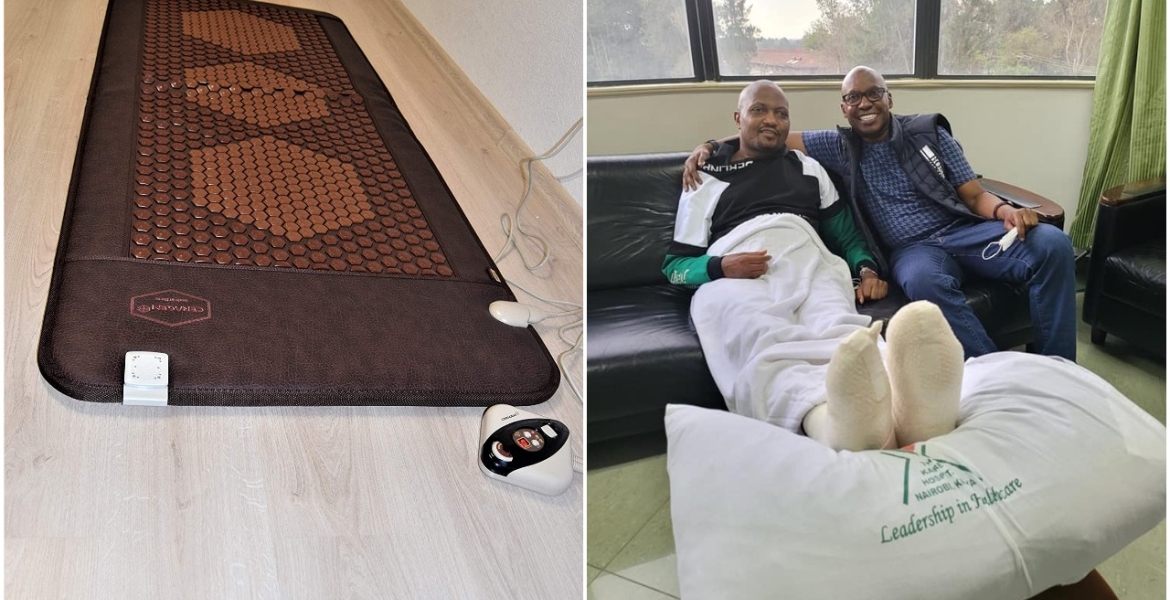 In an interview with Citizen TV on Thursday, Kuria said he purchased the warm mat from a Nairobi-based company named Ceragem through a friend for Sh250,000.

The electric gadget is called Ceratonic Mat and was meant to cure numbness in his feet.

While using the mat, Kuria said his feet exploded and he was taken to the hospital the following day with third degree burn injuries on his feet.

The vocal MP was admitted to Karen Hospital in Nairobi, where he has undergone three surgeries.

“Two weeks ago, a friend of mine convinced me to use a gadget which to my knowledge I thought was authorized. This gadget happened to do some slow burning of my feet. I was trying to cure a problem by introducing a killer solution. I went home at night and my feet just exploded,” said Kuria.

“I came here the following day and they said I had third-degree burns. They had to do some emergency surgery, then they did a proper surgery, and as late as yesterday yet another surgery. Something that was supposed to be a solution has seen me undergo three surgeries.”

Kuria said he was about to buy the same gadget for his mother prior to the accident that has left him hospitalized for the past two weeks.

“If you go through this experience, it is very easy to get depressed. Why did I listen to this guy; someone who has worked internationally for decades and with good education,” he added.

CDF money! This is the dude who was taking selfie where Musando was killed. Ya hapa dunia malipo ni hapa hapa.

Black Moses, It is a good thing you do not fly in donated helicopters owned by a certain fellow with a Kalee accent. Umepangiwa kumalizwa.

Is it “black Moses” or fried brown Moses???

You get to understand how wananchi deal with cheap ass shower heaters that can easily shock someone to death. Time for you leaders to control the electronics being sold in Kenya.

The politicians have been stealing to have the time to make the laws that protect ordinary Kenyans from buying cheap unsafe junk made in China and now sold all over Africa!

Sometimes it’s good for them to be the victims so they can understand what Wanjiku go through! When Kenyans get burned no body goes to see them, let alone going to the hospital!

I have no sympathy for kuria! Any dummy spending shs 250,090 on a foot warming electric blanket ought to be burned! Didn’t kuria understand what “electric” meant??

At last, a comment which can go a long way in helping fellow Kenyans. We need to regulate the products imported into the country.

These politicians live in the utopia land!

This Kuria is the same man being used by William Ruto to destroy the dreams of youths in the central part of Kenya!

Both kuria and that dummy Senator kangata are really busy selling the dead wheelbarrow economy to kids of their daughters age!

They are both sell outs! This kangata looks evil, possessed by demons, and speaks like he never went to standard One! Who voted for these assholes to represent us?

Kuria - don’t you think God burned your feet to destabilize you from walking around to lie to his people about how good Ruto is, while you know that he has already killed your women and children?

I hope kangata steps on the same electric blanket and get electrocuted for lying to the youth. This kangata idiot is selling muranga youths to get cheap money bribes from Ruto! That traitor money he is receiving will burst a hole through his umbilical cords!

We now don’t need both of you fools because you are traitors like the ngati that sold our fore fathers out to Mzungu for dirty gifts! That exactly what both of you are doing - selling us to Ruto! I think Waruguru was right to curse you.

Best time mo kuria it will be your stomach exploding from all the CDF money you have stolen to go but hot plate blackets for your mother while old women in you Gatundu have their feet infested with jiggers!

You are so confused you can’t even tell we don’t want to hear your damn silly story! The stupid Shs 250,000 for a shitty feet heating blacker? Aren’t there kids sleeping hungry that you could have given that money to buy food? Give me a damn break!

Poor Kuria! Bro, money cannot buy you everything and that includes some health issues. If your feet numbness is caused by damaged nerves, then there is nothing, no amount of money can remedy that. I wish you well baba - a stern reminder to us all. Pesa sio everything and now I understand why you've always had that funny walk. Pole.

@sukari - You sound like a foot doctor! I guess you just found a man of your dreams that you can marry and nurture all your life, and his too!

He got enough stolen CDF cash to keep you happy and satisfied! Don’t know what you gonna do to get some sexual satisfaction from kuria! But there are other unorthodox methods to attain orgasm!

@sukari - You sound like a foot doctor! I guess you just found a man of your dreams that you can marry and nurture all your life, and his too!

He got enough stolen CDF cash to keep you happy and satisfied! Don’t know what you gonna do to get some sexual satisfaction from kuria! But there are other unorthodox methods to attain orgasm!!

You are paying for your sins .The family of Chris Msando and others whose whereabouts remain unknown.It is called karma

Now kuria has come to know there are many ways people can die! Y’all killed musando and you think we will have sympathy on you for having your stupid feet fried?

Just imagine the pain musando went through when y’all hacked him to death! Enjoy a share of that pain while you are still alive! Glad you got burned to learn that others hurt too!

Kuria - didn’t that brown electric blanket look evil to you before you spread both of your feet on top of it? Who does that crap! At least you should have used your big toe to test it!

That is how your fake Ruto will fry you after 2022! That electric blanket is like the lies you are taking to the youth with a bottom-down economic theories that spell doom to the future of those kids!

Now you know how the Ruto lies you are taking to ignorant kids will burn them! Do you now feel the pain? Imagine kids living such a painful future where Ruto steal everything!

It is God warning you so you can repent and run away from Ruto. I expect you to run away once you feet heal!

I hope your feet burn again in hell!! Dumb idiot Kuria doesnt even know what neuropathy is, placing an electrified hot blanket on his feet yet his feet nerves are dead!!! Hope it had burnt or overheated your head and brains for you to sober up!! PATHETIC!!!

Quick recovery bro. I have bn using this Ceragem blanket for a while and it has never exploded on me. I think the person who delivered yours tampered with it. It looks like a stage managed accident. More investigation should be done.

Common sense dictates that we need to go back to the basics.
All he needed to do is walking down street in sandles.... GOD GIVEN HEAT.
THE WEST HAVE REALLY MADE US IDIOTS.
PAINFUL,BUT TRUE. WE'RE SO INTO THE WESTERN WORLD THAT EVEN THE LITTLE THINGS IN LIFE DON'T COUNT ANYMORE.
We used to walk barefooted to school, ate one meal a day, maybe two....LAKINI PESA ZIKIPATIKANA, UJINGA UNAANZA.
QUICK RECOVERY KURIA.

Numb feet do not detect hot nor cold. I hope he didn’t set the dial to super hot. He should have tested it with a cup of cold water. Numb feet may be a sign of diabetes. Normal feet would have jumped off the mat pronto . All the same sorry for the experience and heal well.

In a nut shell numbness is in bodies is caused having issues with our nerves.The nerves are ones that make our bodies have different feelings like pain,cold etc.if you have issues with your nerves I guess using a warm blanket would be the last thing you would think of.