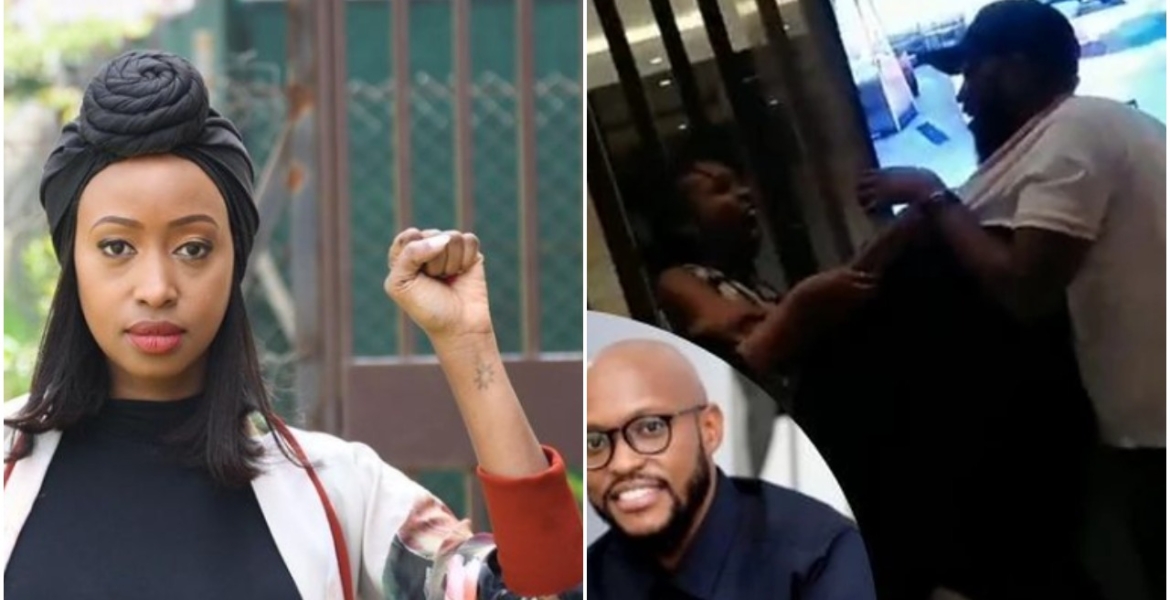 Media personality Janet Mbugua has issued a statement after her estranged husband was videotaped assaulting women at a Nairobi hotel.

A video of Eddie Ndichu and his twin brother Paul Ndichu attacking two ladies and a man was shared on social media by blogger Edgar Obare on Monday.

The incident reportedly happed at Ole Sereni Hotel along Mombasa Road over the weekend.

In the clip, one of the twins is seen vandalizing the side mirror of a car belonging to the victims before joining in the fight.

It is alleged that the twin brothers started the fight and threatened to shoot the women after turning down their advances. A boyfriend to one of the ladies tried to intervene but was equally assaulted.

In a statement on Monday, Janet condemned the behavior, affirming that justice must prevail. Janet, who is the founder of Inua Dada Foundation, further expressed her dismay with the rising incidents of gender-based violence in the country.

“I am saddened by increasing incidents of Gender-Based Violence(GBV). Over the last decade, I have joined my voice in efforts to #EndGBV.”

“I condemn all forms of GBV irrespective of who is involved and will continue to speak out against it. We have laws in Kenya and justice must prevail,” the former Citizen TV news anchor tweeted.

Inspector-General of Police Hilary Mutyambai urged the victims to report the incident to nearest police station.

Crooks always behave like crooks! They should be arrested, prosecuted and jailed!

I have head that Koran permits men to nyorosha their wives. Wow,no wonder the top ten countries with the worst gender based violence,are muslim countries,that is according to Peace Research Institute of Oslo's Global...Does this go against the laws of Kenya? This is akin to condoning violence,in my opinion. We should not let any section of Kenya have their men abuse women.Period. Yes I know women abuse men too,but their percentage is pretty much negligible,statistically speaking.
Experts,Iam sure will agree with me that this gender violence largely stem from drive to control.Unfortunately some women look at controlling men as men incharge,and protective(ndume).How else can you explain why they stay? It is this kind of men that should be avoided.Ofcourse not all men that possess these "dominant attributes " are violent,but if one spend good time dating,they would be able to discern the difference.Basically what Iam saying,if one took time to know their mate,and avoid the "undesirables" alot of these gender based violence would be minimal.

Don't know why they refer to the video as video tape,I thought video tape was pretty outdated anyways the gender violence must end throw those thugs into a jail cell

It is called GBV which means either sex can be a victim. It is even worse for men who are afraid to come out due to shame and taboo. So accurate statistics are not really available GBV of any form and by either sex is not acceptable. IF the characters above are daring enough to abuse women in a nonchalant manner in public, then one can imagine what they do to their significant other in private. People who are in abusive relationships are usually spellbound especially if there are children and finances involved and it's unfortunately not easy for them to simply walk out of the relationship. Most of the abusers give a fake first impression and then they end up changing deep into the relationship. It is even catastrophic that sometimes the victims end up paying a heavy price.

Still the worst gbv against men is kamwiti. Its prevalent but no one cares to discuss it. Lots of paper tigers aka donkeys in form of men left in wake of weapons of mass destruction

who are the Ndichu brothers?