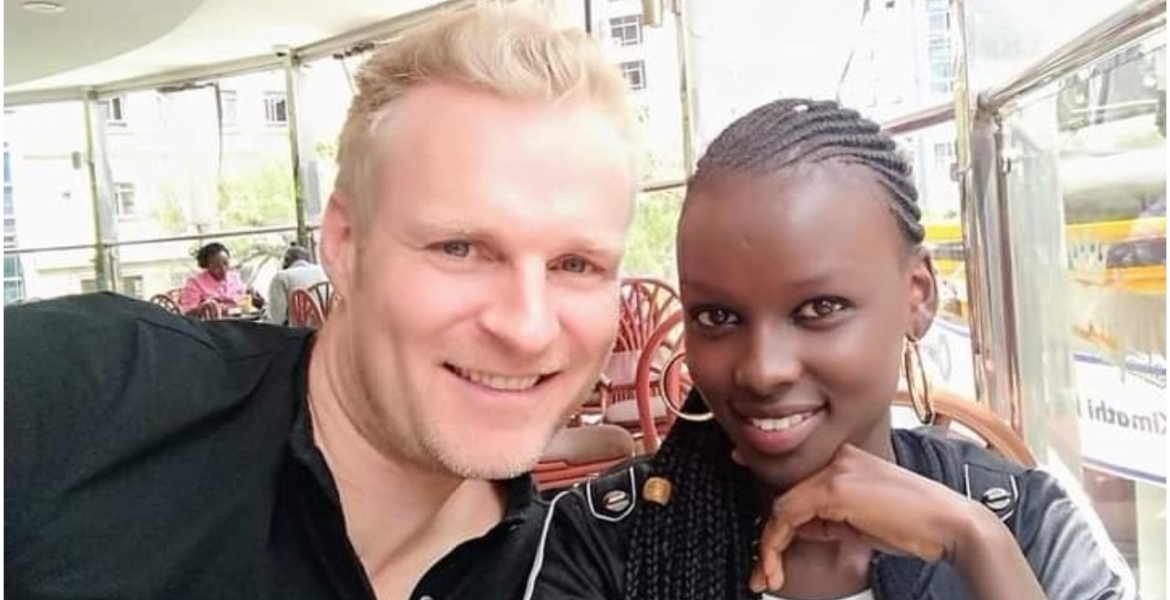 A Belgian man who gave his 21-year-old Kenyan girlfriend Sh121 million has spoken out.

Merc De Mesel, who is known to be a Bitcoin billionaire, says he gave Felesta Nyamathira Njoroge the money as a gift after she agreed to bear him a child.

“We were arrested by detectives drawn from the Directorate of Criminal Investigations (DCI) and questioned for a whole day,” he says in a video posted on his social media page.

Mesel says after he sent the money to Felesta, a student at Nairobi Technical Training Institute, he received an alert that her account had been blocked for 10 days as officers were investigating the huge transactions. He condemned police for mistreating them, insisting that Felesta is his girlfriend and that she is pregnant for him.

On Friday, the Assets Recovery Agency (ARA) filed an application in court seeking to freeze Felesta’s bank account which has a sum of Sh102,654,024.

ARA summoned Felesta on October 18th to explain the suspicious transactions but she did not show up. She instead sent her lawyers who termed the summons as vague, and that better and proper particulars of the alleged offense should be provided. Two days later, the attorneys informed the agency that their client was out of the country.

The agency suspects Felesta is part of a money-laundering syndicate involving foreigners and wants the account frozen pending completion of investigations.

“There are reasonable grounds to suspect the funds held in account number 02100705531800 held at Co-operative Bank in the name of the respondent, are illicit funds in which the respondent is involved in a money-laundering scheme, designed to conceal and disguise the nature, source location, and movement of the funds,” their affidavit reads.

I mean what was he expecting considering the time era we live in today. Terrorism financing is a real thing and is taken seriously. I salute the dci police for making the move. If this guy says who he is and what he is, then good for him. Even im America dollars that amount of money would get flagged and be questioned.
Well look she’s a very lucky girl to get that kinda push present and she’s not pregnant yet. She’s setting the bar way too high for other girls. Most Kenyan men has no chance to land a wife if these foreigners keep “buying” our women. Most of these girls seem to have a price tag. As a man, you just need to match it.

There are many Kenyans who are very rich and powerful and cannot explain how they got rich. No one goes after them although they are well known. Where did Ruto get all the money he dishes out everyday? He’s just one among many. Why go after a poor girl while all the others go free?

go after the the big fish

To internet billionaires hii ni pesa kidogo sana. I might be gullible, am kinda sold. DCI is doing their job, verify and make sure.... I might be wrong but this might as well surprise us.

They don't have this kind of money in Belgium, or any other part of this world. This sounds, and smells like African money, and very likely Kenyan. These were deposits to Cooperative bank, but it's silent on source bank. Its probably Kenyan, Nigerian, or even cash deposit.

@JustMe me here sold out too. They should get to the very bottom of this. And to think that old rug gets such a gorgeous young girl is completely unfair.

What is 121 million in a vibrant society?
This is Bitcoin advert scam...
Bitcoin is a scam...it only takes longer to UNRAVEL..
Ask Bernie Mardoff .

Educate yourself on crypto and open an account and buy. Dont us3 agents. Mpesa is a crypto application. Don't lose a chance to be rich. Cardano.org.

bitcoin is the new wave.

It is good that they follwed a red flag. That is their job. Unfortunately, the government(DCI) has failed us miserably by not follwing up on dubious accounts held by the so called, "our leaders", including the Pandora suspects....

@KK there's plenty of Kenyan wife material women ready to settle down with Kenyan men. One even sent 80k to a guy she met on Facebook. The percentage of Kenyan women getting married to foreigners is negligible.

Why publish her Account number and the Bank? Won't this be a Recipe for Crooks🤑🤑🤑 (reading this) to Hack into her Bank account?🤗

Generous guy but dci still must verify it is clean money.
Crypto millionaires are many.

Double standards! Lots of corrupt billionaires in Kenya who can’t explain how they amassed lots of wealth! We all know that our Kenyan politicians & their cartels are looters of our country’s resources.

Also extreme PROUD Mzungu is like a dam broke walls emptying itself.

Look at nature of voting in AMERICA