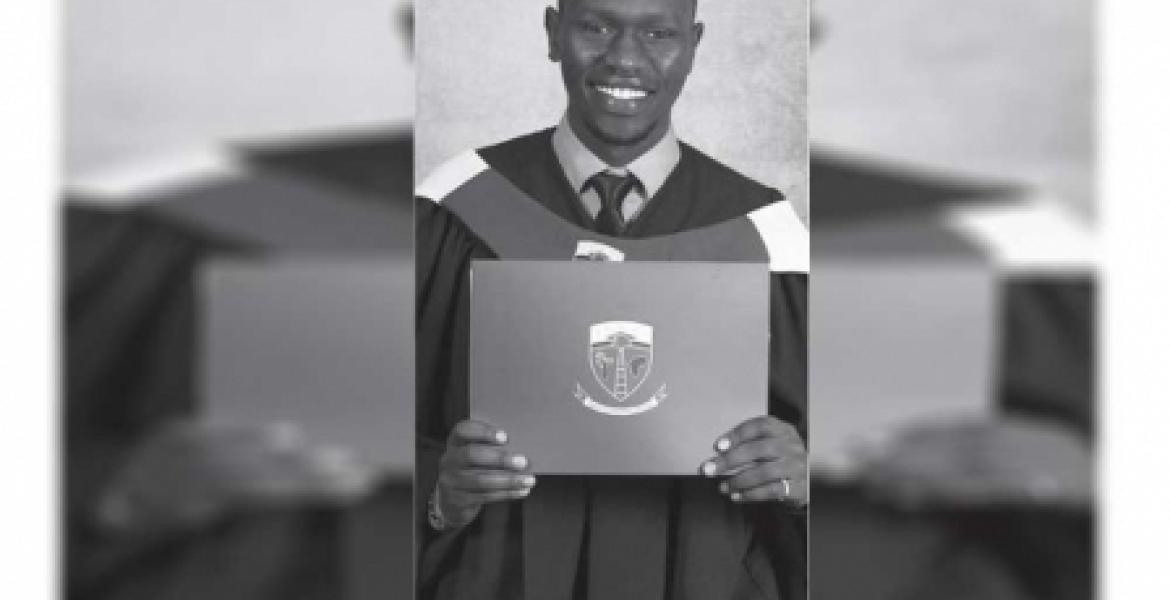 Josphat Loukot had lived in the streets for several years, before Full Gospel Churches of Kenya in Noiwet, Baringo County intervened and convinced him to abandon the streets life. Soon after, the church helped enroll him to Noiwet Primary School in 2004 under guidance of one community elder.

Even with a benefactor, he says that his walk through educational was packed with hurdles. Fitting in school became a challenge and the fact that he had contracted chest problems and body scars while at the streets made it even more difficult.

He narrates how the conspicuous scars inflicted grief on hims as it became the center on mockery as classmates poked fun at him.

However, none of the challenges would stop him from pursuing his destiny, he managed to score 393 marks in the Kenya Certificate of Secondary Education exams.

These academic fete was enough to earn his mother a name among a section of villagers, who went further to built a house for her family and ensured she had a steady supply of casual jobs such as cleaning the local slaughterhouse, tilling people’s farms and burning charcoal.

His success begun gathering pace and grabbed leadership roles including being the chair of the Student Council and the lead author of a Precise Chemistry book while at Lenana.

Today, Josphat takes pride of being the winner of Sh150,000 for entrepreneurial achievement - an Allan Gray Award- by the Allan Gray Investment Company in South Africa.

“I was also among a team of five that organized the Southern African Ideas festival that brings youth from across Africa for a three-day mentorship event in South Africa. I was also a peer counselor, a mathematics Tutor, a financial officer of student enterprise - Bezos Scholars and a Student Ambassador representing African Leadership Academy in official functions,” he says.

He was one of five students who represented Africa in the Aspen Ideas Festival, Colorado, USA. Here he got the privilege of coming one on one with remarkable personalities including former US Secretary of State John Kerry, Walter Isaacson (former CNN boss and current president of the Aspen Institute); David Brooks (Columnist of the New York Times); and Adam Grant whose consulting clients include Google, US Army and the World Economic Forum.

A week later, he received a full tuition scholarship to attend the Yale Young Global Scholars program in New Haven, Connecticut, USA to be part of various seminal texts related to climate change and energy.

As if this was not enough, Loukot received the Bloomberg Start-up Scholarship under the Scholarship America which picks five students for the scholarship in Africa.

The climax of his fortune, however, was the acceptance of his applications to Duke University, Williams College, Vanderbilt University and Michigan State University (USA) on a full MasterCard scholarship.

He has chosen to join Duke University in 2018 after a gap year to major in Economics and Mathematics and minor in Energy Engineering.

He recently graduated in entrepreneurial leadership, African studies, writing and rhetoric from the African Leadership Academy in Johannesburg, South Africa and will be an intern with Global Addictest, a Moroccan organization that focuses on SAT tutoring to North African students applying to American institutions.

He hopes to get into politics one day to champion for the rights of marginalized communities and urges self-reflection, learning and confidence by youth.

“Life paths have potholes that should allow you to take a break, reflect, learn from the mistakes and celebrate success as well as draw lessons from such experiences,” he says.

Awesome, sky is the limit!

This is amazing Loukot! Goes to show with determination and focus you can achieve anything. You have a bright future young man and you make Kenya proud!

Keep working hard..and thanks for inspiring people like me. 😄