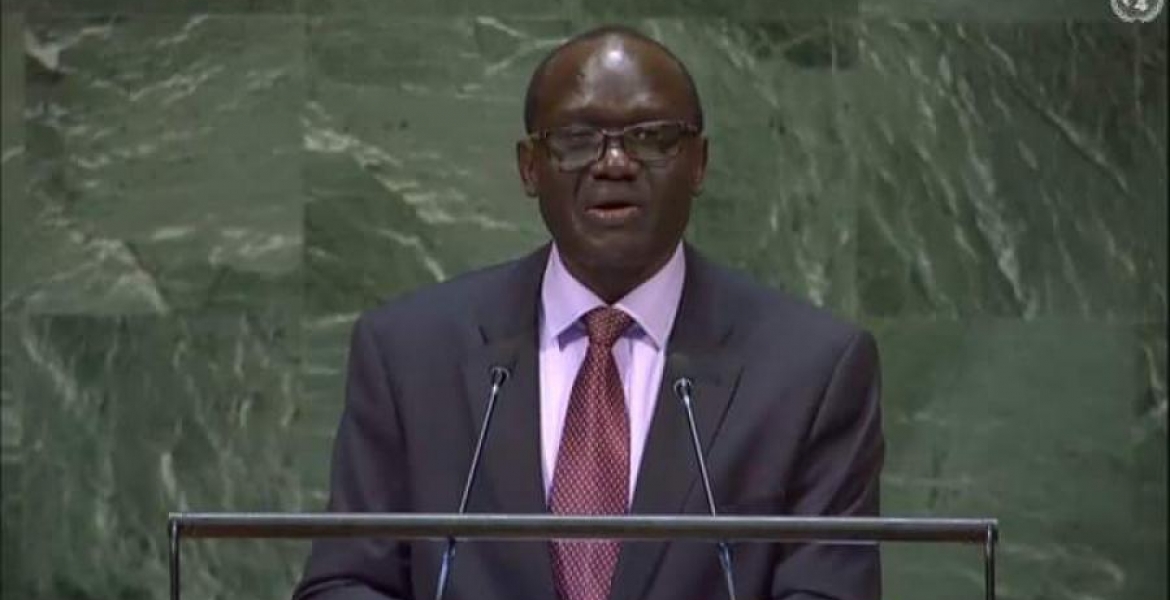 Kenya’s new ambassador to the US Lazarus Ombai Amayo has reported for duty in Washington, DC.

Amayo was appointed to the position by President Kenyatta in May last year to replace Robinson Njeru Githae. Githae, who has served in the post for five years before being moved to Vienna, Austria.

Amayo is slated to present his credentials to President Trump at the White House on Friday, July 17th, 2020. The Foreign Affairs Ministry said Amayo could not immediately assume his new role due to “procedural matters.”

He is one of the most experienced Kenyan diplomats having served in several ambassadorial positions in the past 20 years. His first diplomatic posting was as High Commissioner to India, serving between 1999 to 2004.

Prior to his latest appointment, Amayo served as Kenya’s Permanent Representative to the United Nations since 2018.

He was appointed as the acting Permanent Secretary at the Ministry of Foreign Affairs where he served for two years between 2004 and 2006.

He also doubled up as the acting Director of Administration and Head of International Organizations and Conferences in the same Ministry.

Before joining the diplomatic world in 1999, he served as Chief Executive Officer of Catering Levy Trustees, a State corporation, from 1993 to 1997.

He has also previously served as Human Resource Manager at the Kenya Posts and Telecommunications Corporation.

From 1989 to 1992, Amayo served as Member of Parliament for Karachuonyo Constituency, having been elected on a KANU ticket. In the same period, he also served as Assistant Minister for Education.

Ambai Amayo is serving as a representative of Kenya not US, why present his credentials? When did U S Ambassador in Kenya present his credentials to the President of Kenya for approval? These are unequal positions. My opinion, we should close all these small useless Kenyan and single African embassies and be represented by one Ambassador for Africa in the U.S. If not,Kenya and all other African nations should only have part-time student as their representative to issue Visas and nothing else. A student does not need credentials. U.S shkuld in return have a similar simple student part- time office in Nairobi of equal size not an occupying force until such a time as we have put our house in order.
The money used on these small embassies, should be used to pay off Kenya and African debts. Imagine how much money Kenya and African countries would save overnight by closing embassies world wide?

This are the kind of comments one makes when they don’t understand Global diplomacy protocols/ anything to do with that . Save yourself the stress and Go comment on local chiefs issues or things you can comprehend. Or take up some international relations classes.

It is as clear as day that these Embassies are a liability...again liability to the common mwananchi in Kenya who has to keep paying for this side show to run. They can not even issue visas directly, they can not pick up phones and most importantly these Embassies can NOT pay for themselves. Don't bog us down with "diplomatic protocols and international relations" big words which spell out LIABILITIES to Africans. Lets wake up.

It is as clear as day that these Embassies are a liability...again liability to the common mwananchi in Kenya who has to keep paying for this side show to run. They can not even issue passports directly, they can not pick up phones and most importantly these Embassies can NOT pay for themselves. Don't bog us down with "diplomatic protocols and international relations" big words which spell out LIABILITIES to Africans. Lets wake up.

All ambassadors present credentials when they arrive in the host country and I'm sure their duties aren't just visa issuance. How exactly would one African ambassador work? It's difficult enough with one embassy and a consulate in the US especially if you live on the west coast. I can only imagine the chaos and opportunity for corruption with one ambassador based in D.C. serving 50 states and the District in a country over 9.8 million square km . Some of these people don't even consider themselves Africans. Now if you are suggesting a reduction in the # of embassies but spread them geographically to reduce travel time and have them serve sub Saharan Africa, you might be on to something.

Trump will have several thoughts cross his unfocused mind. Remember the guy suffers from ADD.
- Go back to your shit hole country
- so black so ugly
- How many diseases did you bring to america
- What I'm I missing on FOX
- How about I say africa will e represented by one ambassador from now on.
- All african ambassadors will now be based in Mexico or Canada

Wait and present in January 2021 after elections. There may be a new chief in town by then.

This ambassador has close to 100pg CV, Trump doesnt have time to go thru it, maybe give him just but a summary