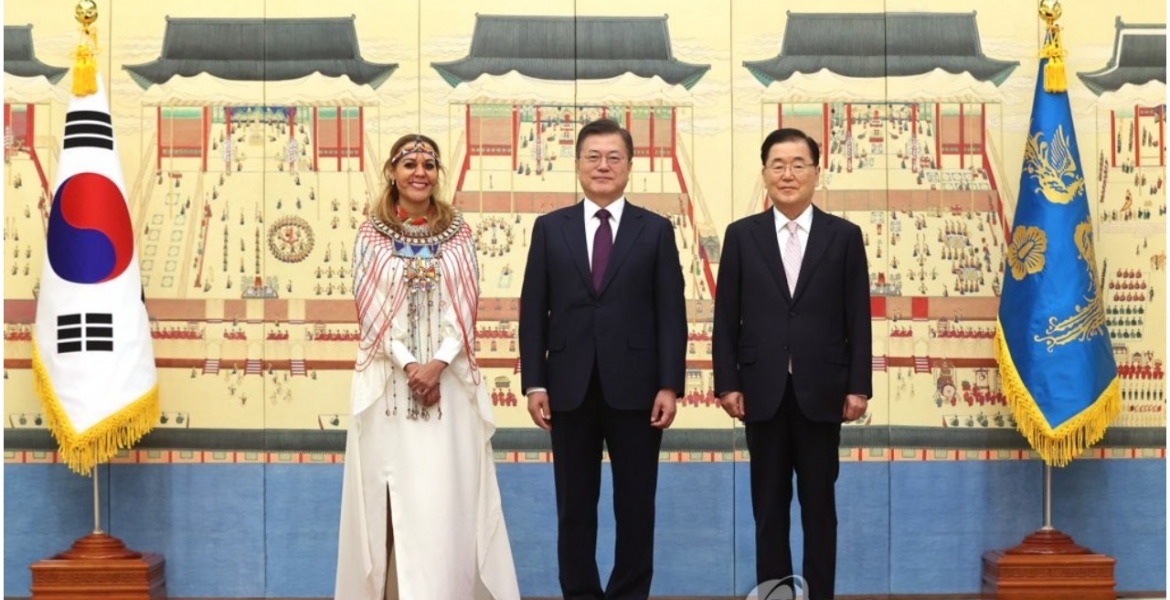 Kenyan-American Mwende Mwinzi has finally taken up her position as Kenya’s Ambassador to South Korea, nearly two years after her nomination by President Kenyatta.

Mwinzi presented her credentials to South Korea President Moon Jae-in during a ceremony at the presidential office Cheong Wa Dae in Seoul on Wednesday, marking the beginning of her tenure as Kenya’s representative in the Asian country.

In October last year, National Assembly Speaker Justin Muturi blocked attempts by MPs to stonewall her appointment to the position.

Muturi stood down a motion in which Parliament's Committee on Implementation wanted MPs to reject Mwende's nomination for failing to relinquish her US citizenship as directed by the House in June 2019.

But the High Court ruled that Mwende cannot be forced to renounce her US citizenship to take up the post. In a ruling dated November 14th, 2019, Justice James Makau noted that an ambassador is not a State officer, but a public officer and hence is not required by law to renounce one of his or her citizenship.

Justice Makau also ruled that even if the petitioner [Mwende] was appointed to a state office, she is protected under Article 78 of the Constitution.

Mwende was nominated to the position by President Kenyatta on May 2nd, 2019.

That's all nonsense,(citizenship by birth is an inalienable right which can not be taken away!!!! Miguna Miguna was a Kenya by birth yet he was denied entry back to Kenya.

That's all nonsense,(citizenship by birth is an inalienable right which can not be taken away!!!! Miguna Miguna was a Kenya by birth yet he was denied entry back to Kenya.

Does anyone know what diet Uhuru is on he has gained a lot of weight in just a few months, can his doctors enlingten Kenyans on his health He needs to go to the gym and get in shape very bad role model for out children .

Sonko said ni cigara kubwa in one of the video circulating on social media.

Wacha ata yeye akule mali.How do you benefit from three Kenyan US embassies manned by people born in Kenya?All these useless money-minting embassies should be crossed as they only help those who work there not all Kenyans abroad.

Have they been paying her for those 2 years?

So she was born dual? Kenya parents in America. Interesting. State officer vs public officer. She could be a CIA agent and have access to Kenya secret info. No questions asked

Being dual has its own disadvantages. One cannot get high level security clearance. CIA would be concerned one might be a dual agent