Meet 5 Kenyan-Born Athletes Representing the US at Tokyo Olympics 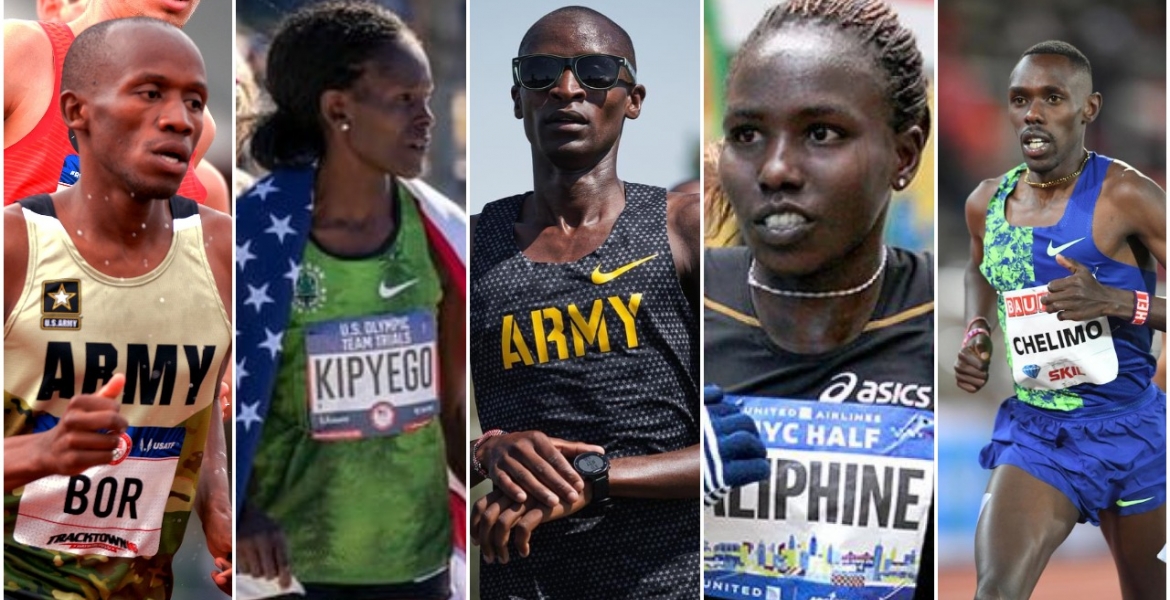 Five Kenyan-born athletes are set to represent the United States at the upcoming Olympic Games in Tokyo, Japan.

1.    Paul Chelimo
Chelimo, who hails from Iten in Elgeyo-Marakwet County, will represent the US in the men’s 5,000-metre run.  The 30-year-old moved to the US to attend Shorter College, transferring to UNC-Greensboro. He attained US citizenship in 2014 by joining the US Army World Class Athlete Program. The Oregon resident has won three US national outdoor and four US national indoor titles.

2.    Hillary Bor
Bor, 31, relocated to the US in 2007 to attend Iowa State University, where he qualified for the NCAA finals four years in a row and was second in 2009.  He was initially thought to be too short to run the steeplechase due to its sturdy barriers and water jump but he proved his coach wrong. After college, Bor joined the Army, which provided a path to US citizenship in 2013.

The father of two trains with a group of Kenyan-born Americans in Colorado Springs, including his brother Emmanuel, who also competed at the Trials. He will appear for the US in the men’s 3,000m steeplechase. Bor was born in Eldoret, Uasin Gishu County.

3.    Benard Keter
Like Bor, Keter will represent the US in the 3,000m steeplechase. The 29-year-old is also a member of the US Army World Class Athlete Program and trains with Bor in Colorado Springs. He hails from Molo, Nakuru County.

5.    Sally Kipyego
She will appear in the women’s marathon alongside Aliphine. Sally, 35, dominated at Texas Tech University, becoming the first woman to win three straight NCAA cross country titles and the first Kenyan woman to win a crown. She also holds six other NCAA individual titles from 3,000 meters to 10,000 meters.

She was second at the 2016 New York City Marathon and became a US citizen in January 2017.  In 2012, Sally represented Kenya at the London Olympics, winning the silver medal in the 10,000 meters, adding to the silver she won a year earlier at the world championships.

These are professional athletes.That's how they make money,and going by their ages,and performance,I have to say that they would not make it to team Kenya. Good move for them.They are in abetter place compared to the Arab Nations.
It would also be remiss of me not to mention that not all Americans embrace these "converted American Athletes". Ofcourse not many natural born Americans would dare air such sentiments in public.Think of how many"true" Americans are being denied achange to go to Olympics...
If you doubt me, ask Mebraghton Keflezighi,the Eritrean born American.Many may recall that some brazen news outlets went as far as mentioning that he was not a"true" American,that was After he had won for them the NewYork Marathon, in 2009.I just hope that such sentiments have abated.If not,at least these athletes can console themselves by knowing that they are treated well by USA Track and Field management.So its a win-win. Goodluck Kenya B. We need more diaspora cash,and investments.Make hay while the sun shines.

Very happy for all of them. Only that it is not easy to win against Kenyans who are still eating Ugali.

Well Kenya will continue to dominate in long distance as long as we have a steady pool of young talent.Even the best coaches and training facilities cannot compete with youth.Hopefully long distance will not look like the French team that won the World Cup were the players are French by status only .Basketball and boxing is still dominated by blacks there must be a push to keep long distance running in East Africa to keep hope alive for the youth

Ha ha, so this how Uncle Sam is plotting against the Steeple Chase gold? Sneeky Uncle Sam!!

I hope MuKenya won’t complain on these guys’ running for their adopted country.But even if he does,he should first state the number of times he had represented any village like-Misri,Kamirithu,Ngecha,Mutarakwa,Rironi,Kabuku etc in Limuru leave alone Kenya.Let the guys chase the guaranteed millions which they would have never earned in Kenya.Good luck.

Track n field has never been so competitive in Kenya. Amateurs who've not exhausted their bullets qualified for Tokyo. Let everyone try in another country. Chelimo won silver in Rio. The rest have a chance of some medal. Good luck

While on this issue of sports. I watched Timothy Cheriyoit dominate in 1500 meters at the Monaco Diamond League. He even beat Simotwo by far,the fellow who won 1500 M. at the Kenya Olympic Trials.
If anybody deserves the discretionary slot,its Mr. Cheriyoit. So far he is the best 1500m runner is the world.Its worth to note that in the last 3 years non of the current competitors have beaten him on the world stage.
So you Electors, use this discretionary spot wisely.No politics,and corruption. We have to send the best.

No @ max. Tim is making money. Let the kid run at Olympics and uplift his profile and resume for iaaf money soon after. Kasinikasi

Well, I thought the idea of competition is to send your best?That is if you want to win. Nobody is stopping Simotwo from making money.Infact, winning is what makes money Tim is making money because he is winning.
There is avery good reason why some countries Kenya includes have a discretionary slot ,and dont just rely on the first 3 to cross the finish line. If we want Gold in 1500M, Tim is our best bet.
Lastly,but not least,is that making money in the diamond league circuit is not affected by Olympic games.There is one more diamond league meeting before the olympics,then the circuit resumes for the remaining 5.So this kid you mention can lift his profile in the diamond league as well are make money. I hope you see my point...my two cents.

Congratulations to them! We are also Kenyan - Americans just seeking better opportunities out of our shitty countries! Proud of y’all! Taguteni unga! Kazi ni kazi!

Like someone said ugali vs fast food. Who is going to beat the other?