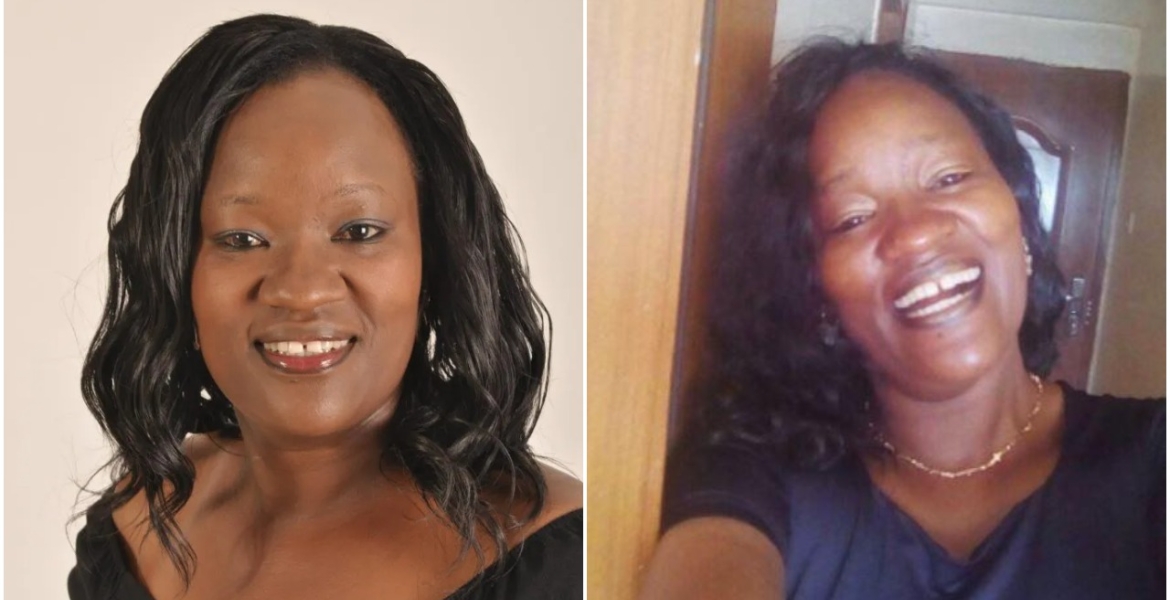 The family of former Kameme FM presenter Jedidah Wambui Weru is in agony following her death in the US.

Jedidah, who was living in Seattle, Washington with her American husband, died under unclear circumstances in December last year. Her family says she moved to the US in 2018 in search of greener pastures and immediately landed a job as a community health administrative assistant.

She later met and fell in love with an American man, with the two tying the knot on August 25th, 2020 after dating for about a year. It is alleged that Jedidah did not introduce the man to her family, and she cut off communication with her daughter, mother, and siblings after the wedding.

Wambui's sister Florence Wanjiru told Inooro TV that Jedidah’s husband denied her access to her mobile phone and would often monitor her calls when she was allowed to speak to someone.

On December 22nd, 2021, the deceased phoned her family back in Kenya to wish them a happy festive season but two days later, a friend in the US called and informed them that Jedidah was sick.

“When we conversed in Kiswahili, I overheard him instructing Jedidah, ‘tell them to speak in English’”, says Esther Nyawira, Jedidah’s daughter.

A few days later, her husband contacted the family and informed them she was no more and that her body was cremated. Wanjiru says they questioned why the husband did not inform them that she was ailing but the man insisted it was unnecessary and offered to send the ashes to her family.

Nyawira declined, insisting that she was not given an opportunity to pay her last respect to her mother, and asked the man if she could travel to the US to see where she lived but the man declined.

“I told him, ‘you didn’t give me the opportunity to pay my last respects. Of what use will the ashes be?’” she posed.

The family suspects the man may be lying about Jedidah’s body and have pleaded with the Ministry of Foreign Affairs to help them establish the cause of her death as well as bring her remains back home for burial.

This is truly sad. Do we have an attorneys in the forum? This family could use some legal advice.

I personally know of a Tanzanian woman who apparently though still alive, is going through the exact same mind and social control by an American man in the same Seattle City. Haki hii mambo ya Green Card hufanya dada zetu waone mambo.

Tell the TZ lady to run before she is dead!! That maybe the only way out!

She may not listen to him, but it is good thing to try! Our ladies should stop looking up at white men as angels. Period.

🙆🏾‍♀️ ... This is devastating woi! And then she was cremated? I can't even imagine what her family is going through, gai poleni sana! Sounds like foul play but that is speculation on my part.

The story not adding up is there any confirmation she is dead apart from what the husband is stating?

How does an adult die without anyone knowing the cause of death? The so called husband need to write a police statement how the lady died!

This happens all the time in US. It is about insurance money. It shouldn't shock anyone but the man may get away with it if there is no one to follow it up. It's a crime very common with white Americans. The man I am sure the man took insurance on the woman before he killed her. Unfortunately our Kenyan women are obsessed in marrying white men. They will continue facing this fate until they emancipate from that mentality that white men are more superior than black men

It’s papers papers papers???The husband has every right to do what he did juu ni wife yake according to the American way of life.Marry your own people guys if you can yaani your own fellow Africans but people have become so brainwashed desperate that you must do anything to get papers.May her soul Rest In Peace thou this American is probably hiding something.

It could be papers yes, but we don’t know motive for marrying the American. Further, you can’t help who you fall in love with and marry. So lets not be too myopic in our judgements!!!

Kinembe you have a young and myopic brains. What you mean saying “our judgment?” No one else has myopic minds other than you and your young brains. Give your opinion within “our” nonsense

@ Ineo,I am not sure if this killing is any different from what we read here on Mwakilishi perpetuated by Kenyans against Kenyans. We we read alot about love gone sour,women exploiting men,men exploiting women.
It all boils down to,"how well do you know your partner". I take is that red signals are usually ignored in the hope that the perpetrator would change.Or some mistakenly think that the good out weights the bad...
Some women are also attracted to "male dominance" and mistakenly treat this as a loving protector.
That said, we can all agree that the husband was very insecure,and a jealous man.These two can poison any relationship.
As I always say,"It is very hard to hide your true colors for 3 years".Take time to know your partner. My two cents.

Your “two cents”, hopefully you meant “sense” are working pretty good today! Hope you are the domineering kind of dude! Women love that shit!

I cannt tell if you are being pedantic,or you truly would have preferred me to use the word"sense".Does it really change anything...in the article?

There was every sign of abuse and she chose to live with this beast ? A lot of gaps in this story though. RIP sister!!

Even men get abused in these sham marriages. I know one from West Africa his wife beats him and threatens not to cooperate in his immigration case.

Some men have to be given physical guidance if they have low self esteem! It’s not called beating when a woman uses those small fists to straighten up a dude who is lacking some inner pride! Mothers do the same thing to shape up silly boys! Can you imagine a low esteemed guy harping on a woman? Geeez!

NEGROES inferiority complex is Amazing . They will love a white trash over their own and always pay big price.

Rotten na Mr. Collision
You two if you are black (negro) you are the most self loathing persons. If you think the rest of us negro's are so below you, why do you feel the need to come on here talk some smack? Oh!? to make your non negro selves feel better? Go lick your wounds and leave us proudly faulted negro's to our own shenanigans? 🙄 kwendeni uko!!

Mr. Collision,
Pia wewe... It takes one to know one! Meza wembe.

A lot does not add up here. This lady had a job, husband did not follow her to work every day. If she wanted she was free to call her daughter and mother. Even with a controlling husband there are opportunities to get in touch with family. Second, in the US after death a postmortem is carried out to know the cause of death.

So sad. This was somebody's daughter, sister, mother etc. I feel their pain. I dont know how the got connected to each other. But obviously she was looking for green pastures just like all of us. I dont know about European wazungus, but as a know-know, American wazungus are the poorest creatures I have ever met. In my entire life in Kenya, I have never seen a poor mzungu. After arrival in the US, I couldn't believe seeing poor wazungus on the streets and at places of work. Another shocker! I couldnt believe seeing a mzungu walking home after work, and asking me for a ride. Confused? Yes I was. Yet another shocker! Even at 55, 60 and even 75 years old, all these men had not married, and were not in a hurry...to date. I wish our women could consult other women living in the US before jumping to marry these white trash or red necks. Most have a trail of criminal convictions dating back to when they were in elementary schools/ And one thing they love about African women is their innocence and submission, something unheard of in the American culture. I pray and hope that our sister will eventually get justice in this complex but effective justice system. RIP

This sounds like life insurance scam is she had one. This needs to be fully investigated.

May her soul Rest In Peace.

May her sweet soul RIP...this is the new age scam where they find a poor, innocent, naïve African lady and butter her with sweet nothings - oh I love you please marry me - soon enough they seclude you from the kenyan community and your family back home, they convince you to take up life insurance kidogo kidogo you are no more (there are ways they do it and the post mortem is just basic if no one raises a finger, and there is no one to fight for your justice since you are all alone here in diaspora. Post mortem haraka and burn body - destroy evidence - send ashes to family in kenya - enjoy your few hundreds of thousands. Am not saying that this is how it goes but I have watched too many crime shows. Its a cruel cruel world

There's a black American Civil rights/defense attorney here in the US that's always on top of cases of wronged black Americans. Trevon Martin, George Floyd etc. We have Kenyan American attorneys....why not take up such cases and fight for your country folks?. Ama nyinyi it's all about immigration?