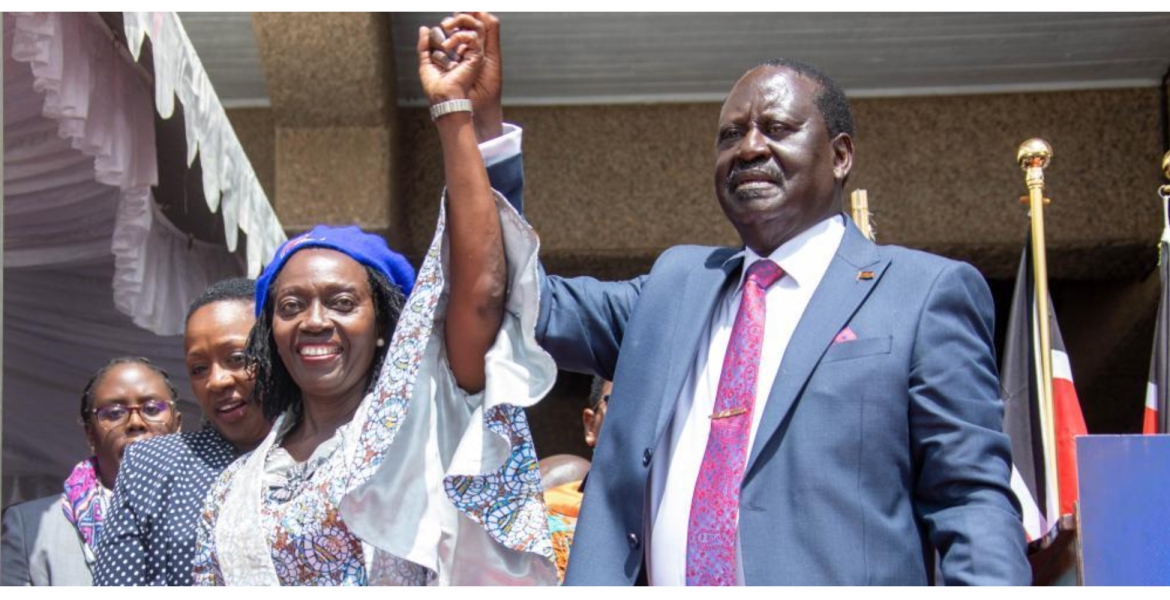 A group of Kenyans in the diaspora has launched a two-week campaign to drum up support for the Azimio La Umoja-One Kenya coalition presidential candidate Raila Odinga and his running mate Martha Karua.

The group comprising over 50 Azimio supporters from the United Kingdom, United States and European Union jetted into the country recently to woo voters in the Mt Kenya region to vote for Odinga in the upcoming elections.

During the two-week period, the caravan organized by Azimio Diaspora UK and the USA will tour all the nine Mt Kenya counties including Kiambu, Murang'a, Kirinyaga, Embu, Nyeri, Nyandarua, Laikipia, Tharaka Nithi and Meru to mobilize votes for the coalition.

The campaign caravan was officially flagged off this week in Kiambu Town by Karua and other Azimio-allied leaders from Mt Kenya region and will cover a county per day until August 6th.

Maina Gatangi, the organizer of the diaspora campaign team in Kiambu said they are mainly targeting young voters, women and small-scale traders across the region with the aim of delivering at least two million votes to Odinga.

"Our target is to convince them to vote for those with integrity and can be trusted to deliver as opposed to the Kenya Kwanza politicians who were using lofty promises to win them," said Gatangi.

Kivindyo Ndivo, Chairman of Azimio Diaspora UK and Europe chapters said they will not relent in efforts to ensure Raila-Karua victory.

"All our eyes are on the big prize for Raila. we will not only campaign but also support in the guarding of the vote after the polls, we are confident that Azimio will win by a big margin," Kivindyo told The Standard.

He further exuded confidence that diaspora voters across the US, UK, and EU will rally behind the Azimio coalition and vote for the Odinga-Karua ticket.

"This time round, the diaspora supporters are in full combat gear both back home and abroad in support of Raila-Karua bid to State House. We want to help in the protecting of the vote. We are working on the logistics together with the Raila campaign team so as to know where we can help to ensure that all Azimio votes are safe," said Seko.

MIKENYA ALISI/BANDIA, is that you? Russian trolling happens to be foreign too ain’t it?
Btw, the so called ‘marauding time wasting dias/foreigner happens to be the ones literally funding the country while Tanga misfits continue defiling, molesting and raping mama 🇰🇪.
All 🪳will crawl back to their 💩🕳 soon and very soon.
⁔⍝⁔⁔ ⁔⍝⁔⁔ ⁔⍝⁔⁔ ⁔⍝⁔⁔ ⁔⍝⁔⁔

Diaspora, who has ever been invited to these meetings?
Kaukenya jameni, who stands to profit?
Who is paying for air tickets, hotels, etc?
Who is funding an entity that has nothing to do with folks in Diaspora?

I am a STAUNCH Supporter of Raila; but I ain't Giving a Penny to the DIASPORA Intermediaries. I am Better off Voting for Raila Straight up☝.

Who are these diasporans claiming thy are forefront with politics....Just wasting there time

Can a normal person waste his hand earned dollars on a journey from US,UK etc to Kenya to vote for muuaji Raila or jambazi Ruto?The truth is corruption and all evils will continue as long as ABOVE THE LAW KILLER,Raila is alive.Corruption,tribalism and selective enforcement of law makes matters worse as anybody connected to the savage enjoy freedom of all sorts of crimes from murder,theft,grabbing,tax evasion etc.But a BLOODY REVOLUTION can be an alternative.

Menye wewe ni kimbele mbele sana. You don't wanna participate in voting just sitting on your toilet, where you're currently texting from waiting for a bloody revolution. Real men are out there, on the ground bringing change to Kenya- however small. They are doing the impossible. Ni lini ulisikia wasepere wamebebana kirende wameenda ku drum up support for Raila or any luo for that matter. If there's anything Uhuru has done that will unite Kenya is endorsing Raila, promiting unity in Kenya. Making folks to wake up and realize who we are really avoiding in this election. We kaa kaa hapo tu ulishonde ukimaliza tujulishe. If a bloody revolution is what you're praying for this Sunday, may it Begin in your homestead!