Willy Mutunga to Travel to Canada to Bring Back Miguna Miguna 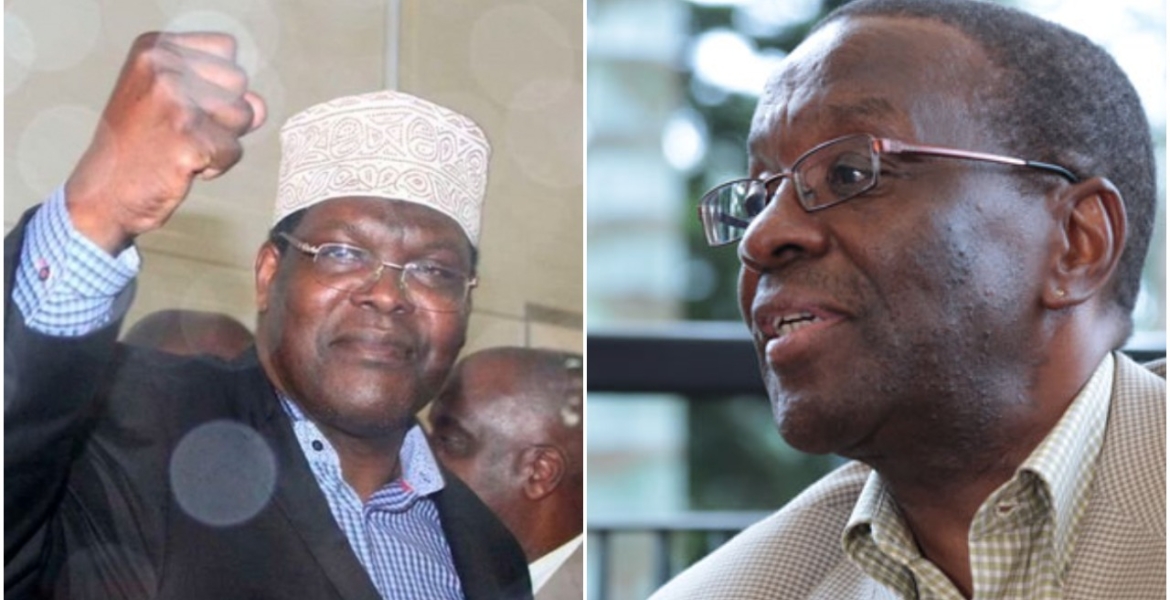 Former Chief Justice Willy Mutunga has announced he will be traveling to Canada to bring back lawyer Miguna Miguna, who was deported in 2018.

Mutunga in a statement on Wednesday said he will return to the country with Miguna on November 16th as he condemned the government for disobeying court orders issued in favor of the Kenyan-Canadian attorney.

“I have taken this extraordinary step for two fundamental reasons. The first is because of the continued, flagrant and reprehensible defiance of the Government of Kenya, its agencies, and senior officials, against the numerous valid court orders in favor of Mr. Miguna,” Mutunga stated.

Mutunga, who served as Kenya’s Chief Justice between 2011 and 2016, urged members of the legal profession, human rights activists, journalists, and Kenyans at large to “join us as we take a stand against the culture of impunity, lawlessness and barbarism that is slowly creeping upon us.”

Ahead of his trip to Canada, Mutunga issued seven demands to the government to ensure Miguna’s smooth return on November 16th.

He demanded that the government immediately and unconditionally withdraws the red alerts that it has issued against Miguna and allow airlines to fly him to Kenya; publicly apologizes to Miguna and all Kenyans for the violations of the constitution and the contempt of court, and complies fully with all court orders including those regarding reparations and costs; ensure that Miguna Miguna is not removed from the plane before or after it lands at JKIA; ensure that no security and immigration officers block Miguna’s entry at JKIA or at any other port of entry; and comply with the notice that will be given to the Inspector General of Police not to interfere with, disrupt or threaten Kenyans who travel to JKIA to receive Miguna.

Mutunga also wants the government to ensure that Miguna’s rights are safeguarded, including his right to be issued with a valid Kenyan Passport, his right to free speech, association, assembly, and travel, and to be safe from arbitrary arrest, detention, harassment, threats, intimidation, and abuse.

You don't have to personally go pick him up and deliver him back like a package. Uhuru's government should respect the rulings of the courts and declare Miguna free to travel. It's as simple as that?, unless Mutungu is busy trying to play the hero over the matter.

The court mbandia is just courting mayhem in Kenya by issuing foolish orders! Mutunga was a useless CJ who only care about himself! He is a thug that Kenyans should ignore!

These judges and lawyers have such a short memory and are trying to tear Kenya down because they have all joined the corruption train driven by WSR!

We are tired of these useless judges and Kenyans should reject them!

This former CJ Mutunga and the other one, Maraga were total failures during their tenure. Both craved( and still do) for attention and never did their work. The backlog of court cases is at a forbidden level. They blamed the excecutive for everything while their judges were bribed, always on holiday and could care less for common man. They are both yappers who can not get anything done. We need doers not yappers and attention seeking girly-men

Miguna does not need him to board a plane to Kenya. Besides how will he help if Miguna is not allowed in? Will he strip naked? Ata do?

Correct! Miguna does not need a helping hand to fly to Kenya...nobody does,except that maybe they want to bribe him into the wakora network.

I think Kenyans must rise up against judges because they seem to think the law was made for other Kenyans and not them!

Kenyans must look closely the direction these judges are taking the country! The judges are telling Uhuru to elect some very corrupt judges! I know of a case judge Ngugi asked to be bribed with Kshs 4 million but when the family failed to give him the bribe, he jailed their kin for a long time! He used so go between to negotiate the bribe so he can still look clean.

There is a huge problem in Kenya because of these crooked judges! If they judges are not properly watched, they will destroy Kenya and make it be like Sudan! Kenya judges are too arrogant and they must be controlled by the executive!

Is Miguna a child to be picked up and repatriated back to his home? What do Mutunga hope to accomplice with this flaunt move? No need to waste his energy.

Mutunga couldn’t keep his family together because he is homo but now he has found love in Miguna to go put him in a Suitcase and bring him to Kenya to marry him! This idiotic gay guy was the most unfortunate CJ Kenya had, seconded by Maraga!

Now both these fagots are taking in retirement while they both failed as CJ. Nonsense!

The stupid idiot Miguna should never be allowed back to Kenya! He is a threat to peace in Kenya! Let the fool stay in Canada!

Good luck WaMuzee.Mutunga/Miguna success will mark the beginning of unstoppable REVOLUTION and jailing of all elite gangsters led by Uhuru.They might escape the FIRING SQUAD if the two lawyers lead it.But LIWE LIWALO,Uhuru & Co must be ejected from power.

Whore @menye! Kenyans are tired of your little brains talking about revolution while you are the greatest thief in Kenya! Kenyans need to organize a mob justice and rench your ass in public by using tires to burn you alive!

Kwani miguna ni mtoto wako? or you need a wingman to create attention .Are you thinking of running Elections are around the corner and Miguna will provide the attention you desperately seek.

I don’t think Mutunga is a Luo, the man is mijikenda I think. Giriama.
Miguna is a Luo.

That little place where the dummies come from! No wonder he is too stupid! They all believe in kamuti there! He is a stupid man.

I never understood why airlines agree to enforce a red alert on someone who is not a terrorist.

Muguna is a terrorist! He works closely with Alshabab, the Nigerian mafia and the Turkish terrorist associated with the DP ruto! All these people are working together to destroy our country so they can steal from it!

Is it true that they have been dating

Mutunga is going to Canada to engage Miguna with the other ear-ring! They are both homosexual friends. Cant let gat dudes ruin our country! I think time has come to check the judiciary thieves! The judges are working hard to destroy Kenya! We should destroy them first before they set our country on fire!