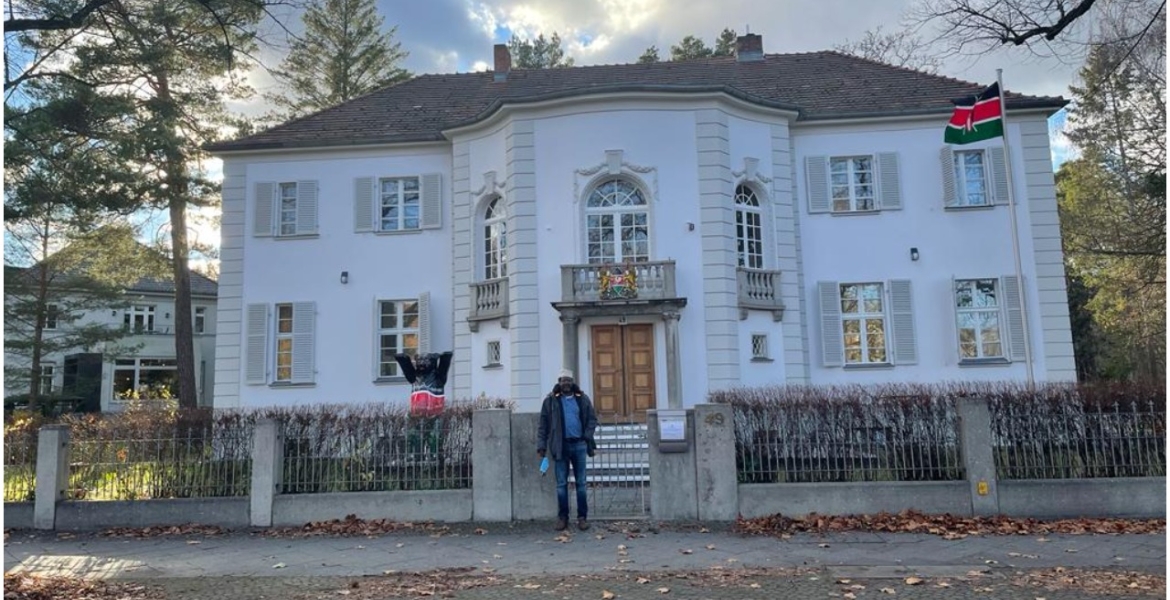 Miguna Miguna at the Kenyan Embassy in Berlin

Lawyer Miguna Miguna says officials at the Kenyan Embassy in Berlin have refused to issue him with an emergency travel document as directed by the court.

On Monday, High Court judge Hedwig Ong’udi directed Miguna to obtain a one-way emergency travel certificate from the Kenyan High Commission in Ottawa or the mission in Germany within 72 hours to facilitate his travel to Kenya.

Miguna, who is stuck in Germany since last week, says he arrived at the embassy in Berlin at 1:50 pm but officials informed him that they received instructions from Nairobi to deny him an emergency travel certificate.

“Amb. Tom Amolo hurriedly left at 2 PM. Ushered to the boardroom by Emma Mabinda, Karuma, and Esther Mungai and told that if they comply with Justice Ong’udi’s order and issue me with a travel document, they would lose their jobs,” Miguna said through Twitter.

He claims Mabinda asked him for proof of Kenyan citizenship and he showed her his national identity card.

“She demanded a "Certificate of Regaining Citizenship. I asked her to show me the "Certificate for Losing Citizenship," but she stated that she did not have the same. Mr. Karuma then said that "the court Order you are speaking about is rumors and maybe has been appealed”.”

Miguna, who was deported to Canada in 2018, insists he will not reapply for Kenyan citizenship since he has never renounced it.

The Kenyan-Canadian political activist was barred from boarding a Nairobi-bound France Air flight last week over a red alert allegedly issued by the Kenyan government.

This learned fool with MACOW have no wisdom to know when to hide and time to expose cover.

Serikali ya majambazi...majaaambazi!..remember the song?..Uhuru trashed court orders, Kenoti swears not to abide by another court order, Omamo, who is related to Uhuru is no exception and Kenyan media and civil society dead quite!

Y’all need to believe weather you like MM or that that he ain’t pulling this shit out of his ass!

It’s true that the Kenyan government are out to frustrate him.

I am sure y’all are adults of a sound mind, this, ought to know that MM has an inherent right to even enter Kenya legally with a Canadian passport! The fact is, MM’s Kenyan passport had not expired, the same government officials mutilated it illegally! It was upon them to re-issue another passport to him at the department’s expense but they didn’t.

Why must he apply for an emergency travel certificate?? Does it make sense to anyone? Today, it’s MM’s rights being violated, next, will be you or me. This ain’t funny.

Miguna, in the old constitution, if you applied for another country’s citizenship, even if you are a Kenyan by birth, by default, you lost your Kenyan citizenship and to regain it, you must reapply to regain your Kenyan citizenship. That is the simplest straight forward way all of us follow. Why you want it differently is just a sympathetic cheap publicity, a narrative to stay relevant. STOP your silly stunts. Get a job, stay busy!!!

That ain’t true for his case. Based on evidence adduced to court, he’s always travelled to Kenya using his Kenyan passport. The passport hasn’t expired only that it was mutilated (holed) the day he was deported.

His trouble began soon after he swore Raila into the presidency. Martha Karua also did the same to Kibaki at the middle of the night prior to Reconsciation of votes & nothing happened to her.

Search & read his court case from the beginning to the end.

He had an illegally obtained passport which is now invalidated. He needs to follow the law like the rest of us. In the meantime I'm hope he is enjoying German hospitality and soon will be back at home cooling his heels in Canada - I hear it's cold this time of year.

@Imara Daima, If wishes were horses beggers would ride one. What we've my brother, is a banana republic and not three branches of government respecting each other. Our government is ran on a state of organized chaos; it has to. Because smooth running- transparency institutions would have no room for corruption and thievery. Corruption is the main currency in Kenya today. I went to Huduma office in Murang'a yesterday-only to be asked "si ununue chai" in order to get service from the very lady hired to do just that! And, now, it's hard believe that our country's future seems to be in the hands of a corrupt thief and his partner in crime (burning Kikuyus alive in a house of GOD), a violent and corrupt man who uses dead bodies and uchawi to raise to power.

“Show me the certificate of losing citizenship” yes that is how you deal with people who by virtue of being in positions of authority think they can crush you like a roach and you are suppose to roll over and play dead.This person called Mabinda needs to understand the embassy is there to serve and it is not his place to authenticate Miguna’s citizenship.This German embassy can stall all they want but a court order supercedes any other communication from the president or his minions like the ambassador and this pack of chihuahuas giving Miguna a hard time.

@Guest, I lost mine too but I wasn't issued a certificate to that effect. Your hero is well aware of this and is just grandstanding. Per the old Constitution, you lost your citizenship as soon as you swore allegiance to another country. He swore to be faithful and bear true allegiance to Queen Elizabeth - that is the Canadian oath. The redress of this is addressed in the new constitution but your hero chooses kelele instead of action