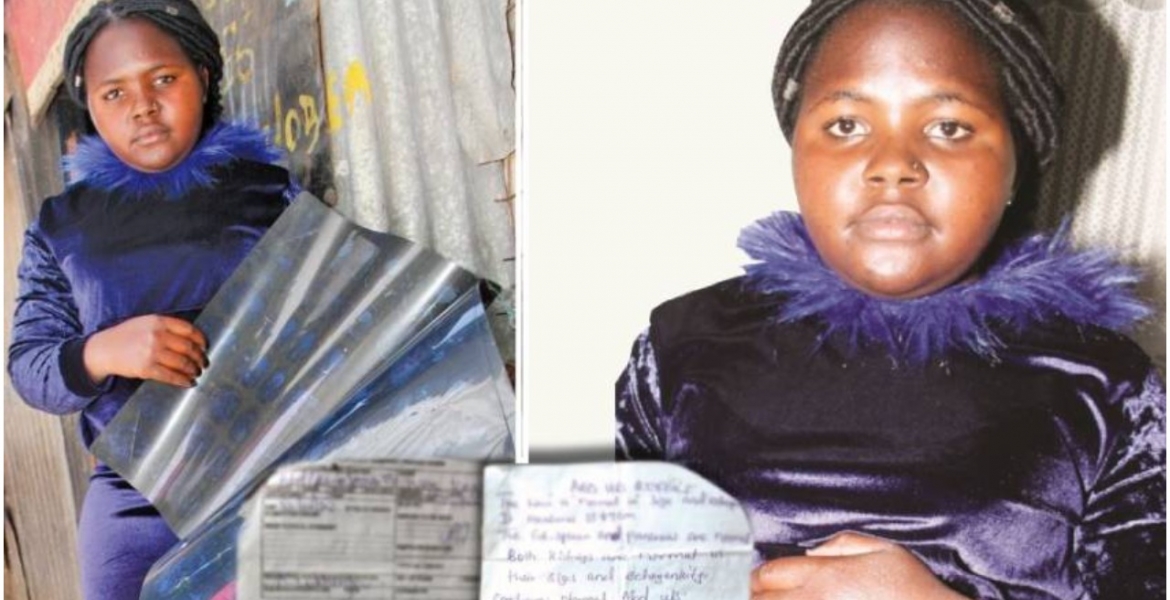 A 22-year-old Kenyan woman is accusing a Nairobi hospital of secretly removing her kidney during an operation about two years ago.

Ivine Kinagu says she went to Mbagathi Hospital in July 2019 to seek treatment and was diagnosed with abdominal pains with the doctor recommending surgery after several tests.

“When I went to Mbagathi, I was diagnosed with stomach problems and was told I will need surgery. An operation was done after tests, but nobody mentioned kidney removal or that I had a missing kidney,” she told The Standard.

She later developed post-surgery complications and returned to the same facility, where a scan revealed that one of her kidneys was missing.

“I started getting fatigued and persistent stomach pains a few months after the operation. When I went back to Mbagathi Hospital, I did another scan and that is when I was told I was missing one kidney," Ivine said.

Another scan at Mama Lucy Kibaki Hospital confirmed that Ivine, who has only had one surgery in her life, has one kidney.

With the help of Catholic priest Father John Munjuri, Ivine got a team of volunteer Catholic lawyers, who wrote to the Kenya Medical Practitioners and Dentist Boards over the matter.

Records on the scan done on Ivine before she underwent the surgical procedure indicate that both her kidneys were normal.

“We are wondering what might have happened in that surgery. Someone must have removed her kidney without telling us,” her mother Jerusa Kageha said.

Ivene was attended to by a consultant doctor named Tinega, who insists the kidney was not removed at the hospital. “That would have required special consultation,” he told The Standard.

Tinega indicated that even though Ivine's medical records bear his name, he is not the one who wrote them, adding that all discharge notes have the name of the consultant-in-charge.

“There are many clinicians in a ward who would write notes when a patient is discharged,” he said.

Ahmed Twahir, chairman of the Kenya Renal Association, said: “Nobody knows for sure what could have happened, but there are several possibilities. If the matter is taken to the medical board, the doctor and the team that worked on the case will explain.”

A society of thieves and robbers at the leadership-elites' level-Corruption pandemic, moral bankruptcy, and reckless disregard for fairness and justice has made our country one of the most toxic nations on earth. Now the question is: how many Kenyans are moving around unaware that one of their kidneys was stolen by our highly and very learned doctors? How can you put a fellow human being to sleep for surgery only to yank one of his/her kidneys away? Government should provide a free scan test immediately for anyone who has had a surgery and suspects that something is wrong. We need to get to the depth of this matter before we are left with zombies moving around in the country with missing body parts.

JOMO KENYATTA and JARAMOGI started this kind of corruption.
Arap MOI perfected it.
KIBAKI turned a blind eye.
UHURU has has no teeth.
REVOLUTION is key to root this mess out.
That's why BBI WILL PASS,SO THAT THEY KEEP PROTECTING THEIR ILL GOTTEN WEALTH.
WAKENYA TUAMKE.

It's time to find out how many Kenyans have ever had a surgery in this hospital and how many have missing body parts after the surgery.
How many doctors have become dealers in body parts and for how long has this been going on?
How many private hospitals are engaged in body parts business?
This issue should unearth all issues in hospitals .
If we don't protect our own citizens, who will?

That means there are underground market of body organs in Kenya. That's why you see people popping up saying they want to sell their kidneys.

No wonder so many governments around the world are very strict in prohibiting this trade of body parts.

In a govt hospital that is taxpayer funded. That's very sad and unacceptable. Human life has been so cheapened in Kenya. I hope the minister does a thorough probe

Oh Lord! Thugs thugs in white coats? I agree that those who have had surgeries, especially in that hospital or other affiliates where staff and consultants are shared, be scanned of missing organs. Wow. Folks might be getting surgeries with one eye open or with a witness/attorney present if some of those who took the medical oaths to do no harm and by all means to do good might not be trusted.

Oh Lord! Thugs thugs in white coats? I agree that those who have had surgeries, especially in that hospital or other affiliates where staff and consultants are shared, be scanned of missing organs. Wow. Folks might be getting surgeries with one eye open or with a witness/attorney present if some of those who took the medical oaths to do no harm and by all means to do good might not be trusted.