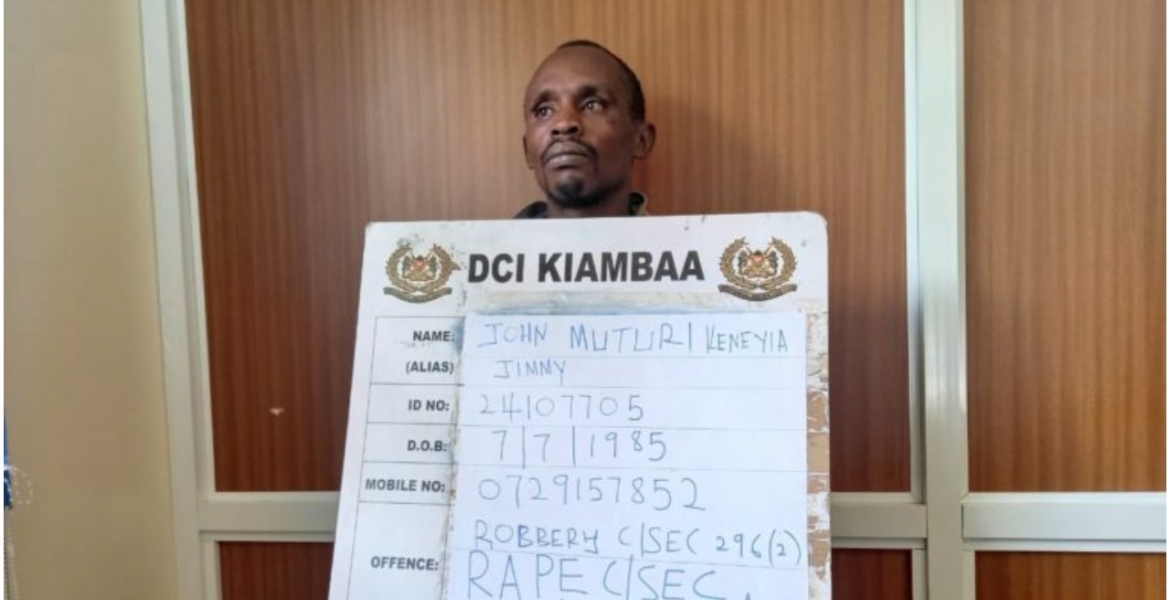 Muturi was arraigned at a Kiambu court, where he was charged with over 100 cases of rape and robbery with violence in Ruaka, Kabete, and Kiambu.

Muturi, who has been going by the name Francis Ngugi, allegedly confessed to sexually assaulting and robbing more than 100 women.

“He has agreed before the DCI (Directorate of Criminal Investigations) officers in Karuri that he robbed, raped more than 100 women, raped and killed one victim,” a police report reads.

One of his victims presented herself before at Kabete DCI and told detectives that the suspect raped and impregnated her.

Appearing before Principal Magistrate Patricia Gichohi, Muturi pleaded guilty to the charges leveled against him, saying he wants to be sentenced quickly before other victims present themselves to the police as they can add more weight to his case.

The court ordered he be remanded at Karuri Police Station pending a mental assessment.

Police have urged anyone who may have fallen victim to the suspect to report to the nearest police station.

Seems like he really needed to get his rocks off. He’ll have plenty of time to think about his crime in jail.
DCI needs to digitize the criminal board. Terrible handwriting on the board. Whenever I see that board, I can’t help but wonder who’s behind the horrible handwriting.

Let's ask women he raped what would be the best punishment.Yes, I know there law in the books on rape,but sometimes it feels like these laws are lenient.For example they dont include removal of the "offending organs".

Hang him! He probably infected every one he raped with a toxic disease! He is a mass murderer and he sold be hanged!

@ Justin,If it weren't too late,I would nominate you for CJ position...You suggestion would work very well.Especially in making sure that the rapist's last action would be his last for good.

Why did he confess so fast...just like any other cases ,suspects go through HELL..
WHEN YOUR BALLS ARE BEING SQUEEZED IN KARURA FOREST BY DCI ...YOU'LL CONFESS TO ANYTHING.
BUT IF THEY HAVE DNA TO PROVE IT...HE DESERVES JAIL TIME.

jail Time? NO! Waste of taxpayers money! Such criminals have no place in our society! So, just twist and reap his balls off before killing him! Over a 100 women? Let the women decide what he deserves.

You are a freaking idiot! Maybe if he had raped your wife, your sister, yourself, you would be concerned! Silly you! You are trying to reason like a goat!

@ Kora kanini, how about if they find out that he is mentally not fit to stand trial? Should he still face jail term?,How about removing his jembe and the two bags of seeds,and not jail him?This would solve two issues.1 He will produce less testosterone hormones,which experts say is responsible for aggression,and sex drive 2.He would never rape again.Sounds like agood deterrent to me.

You could be right.

Sentence me quickly to avoid more charges. Yes, sentence him do die.

The law should amended to include castration for rape and defilement offenses on top of jail punishment.But even if it is not included,Mason/Carpenter/Fundi/Muturi will face married prisoners in jail for raping their wives and children while they were in jail.