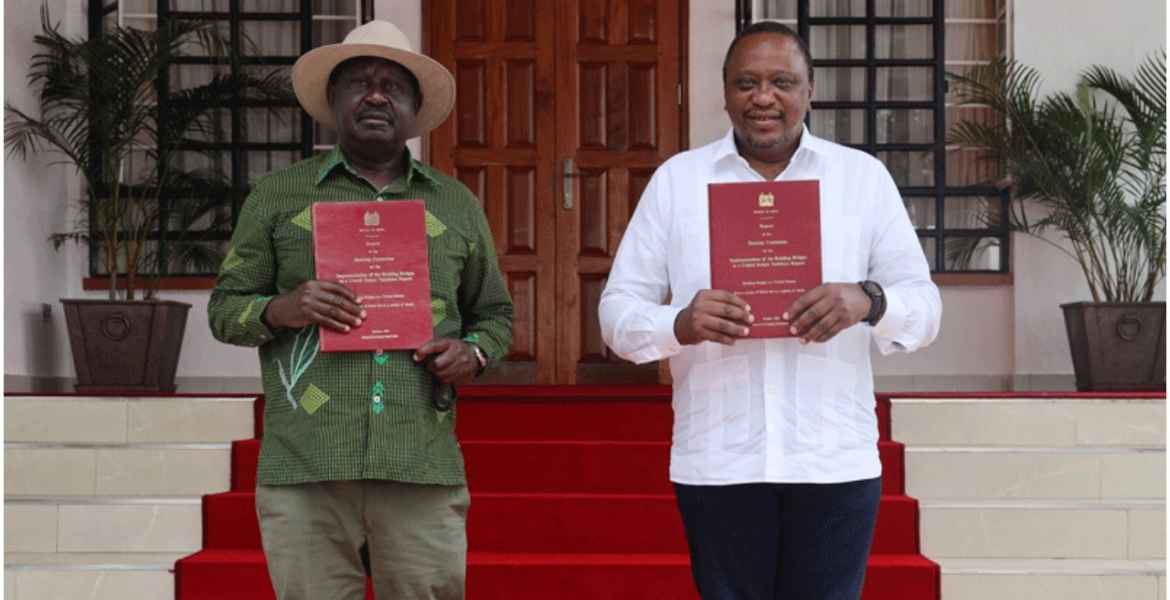 The judges further overturned the decisions made by the Independent Electoral and Boundaries Commission (IEBC), including verifying BBI signatures, saying the electoral body was not properly constituted as it lacked the requisite quorum of five commissioners to make any major policy decision.

“The BBI bill cannot be subjected to a referendum before IEBC conducts voter registration. There is no quorum at IEBC to conduct its mandate including signature verification submitted by IEBC. At the time of launch of the report, there was no legislation to guide the conduct of the referendum,” the judges said,

“All the decision IEBC made regarding the constitutional amendment Bill is illegal because it lacks the quorum required.”

The judges further held that the BBI steering committee was unlawful and had no legal capacity to promote constitutional changes.

“An injunction is hereby issued barring IEBC from undertaking any processes with regards to the amendment of the constitution,” they said.

The ruling follows a consolidated case filed by eight petitioners. The judges directed parties to bear their own costs.

The ruling deals a blow to the Constitution of Kenya (Amendment) Bill 2020, which was headed for a referendum following approval by both the Senate and National Assembly.

REVOLUTION NOW.Your president,Muigai violated the constitution he swore to defend which means the so-called senate must impeach him immediately.I wonder how about 300 MPs & senators,many of who are lawyers expect Orengo could not point these errors.Others are 2600 idle councilors.All these people were bought like hookers at ZIWANI,MAJENGO,IMANI,SABINA JOY,KOINANGE,MORDEN GREEN etc.They are worse as BBI would have coursed total destruction of ordinary Kenyans.

How can they impeach when they have been compromised with money.

How is it that there are those of us who can see through political conmanship/nonsense and outright stupidity of a president who thinks that just because his father could get away with bs he too cheered by a power hungry character can pee on Kenyans. I hope that even as we celebrate the ruling , the fact parliament/senate made of yesteryear "freedom fighters" can egg on an a fraud is shocking- men/women with no spine/ values. The president should bow in shame but he has no heart- vengeance is the only tool he inherited from his dad DNA!

I wasn't expecting this. Hustlers back in the smiling aisle again. Passing of BBI from county to parliament to senate exposes political leaders. They dont work for electorate. Court recommends impeachment of president. High five Maraga for introducing new history 2017.

You never expect much because you are just a sheep following others blindly! Keep you stupidity to yourself!

Maraga was the most illiterate CJ to ever hold that position and he never failed to disappoint throughout his term! He put Kenya in the worst divisive place and the country have yet to heal from his shortsighted actions.

@ mutai dont blame Maraga as genesis of division. The root started 1963 and still deepening. Once dynasties get uprooted things will change. We need a paradigm shift and a turn towards the uniter that is God

Well it looks like a certain person may not see the presidency and another one who was hoping to finagle his way back to power will have to wait.Financially we cannot afford this BBI bull shit but on the other hand we do not want to elect a thief to the Presidency.May God help Kenya if only the judiciary can be listened to this time atleast they have tried to stop this BBI nonsense ati more bursaries for school kids what about all those with the education and no jobs.Let the chips fall where they may time of elections next year.Kila mtu acheze kama yeye “wanjiku” will decide hopefully without BBI

Kenya deserves a leader who is not tainted with corruption, crimes against humanity, killings, and other all sorts of bad things. This sentence describes DP Ruto! We have to make sure he does not get to the presidency in Kenya! The judges have been brides by ruto, and we all know it!

The Reggae has been stopped for now. BBI is selfish and misguided and should not be shovelled down the throats of Kenyans. Those behind it only want high positions in the future government.

Hallelujah!! There truly is a GOD in heaven hallelujah. The handshake from hell is bye bye.

The corrupt judges are paving a way for the corrupt Ole mashamba but they will fail! They should all be jailed along with their corrupt friend, the DP Ruto! This is not done with; watch this space!

@Kipserem you can keep dreaming your useless corrupt BBI and corrupt Raila and Uhuru till cows come home, but know that Kenyans will defend and protect their hard won uhuru and constitution come what may. All corrupt leaders must go: Raila, Ruto, Uhuru, Kalooser, Muda, Weta, Gideon Moi, Obado, etc- Thousands of our children are homeless in our cities while corrupt elite goons live in opulence and Splendor on people's stolen money. How can that be right??

Glory to God. All this madness has been stop. Kenya is not Uganda where president extend his term the way he wants. Return our money you wasted on BBI. What a shame? Kuria said MPigs were bribed with 100K and MCAs with 2M. Kuria was right.

What a JOY Uhuru must be made to pay all costs inlcluding the bribe money which MCAS Mpigs and senators received . Uhuru must have forgotten we are in the 21st Century and Jomo and Moi Era cannot return to Kenya we are another generation. who shall we vote for president 2022 come on youth get one of you we will vote for you

So this exercise of promoting BBI was just futile effort.How could they not have known that the High court would nullify the effort?
Legal advisers to President,and RAO should refund the payments they received for counsel...

Waganga walikula pesa na kupotea. They never run out of fake ideas though.

Good to see the Judiciary branch keeping the balance and check on the government in Kenya. Simply Democracy!

This is just wonderful. Congratulations to the judges for the brave and good judgement. This judgement is surely a win for Kenya.

The Judges noted Uhuru doesn't want to retire and hand over power to William Ruto, Which We will do it with or without Uhuru

A good day to be a Kenyan.

If Your intention is to sink Me for a takeover, You will also struggle to be President until Your sunset days and You will never be.

You got a cable of the most corrupt judges making stupid decisions that affect all Kenyans! Odunga and Ngugi won’t want to have the constitution amended because it fits their corrupt ways. They were heavily bribed by DP Ruto to nullify the BBI. These are the same judges who voted to nullify the presidential elections in 2017. We should not abide with a decision made by the judiciary crooks to fit their idiotic narrative. They have all been bribed by the most corrupt DO in the history of Kenya! Now is the right time to impeach Ruto and send him to jail!

Slavery and "Baal" gods should start packing. They are on their way out of Kenya (God's country).
Slavery of Kenyan's has started to crumble.
Time for revelation and restoration. God is on Wanjiku's side.
Thank you judges. You have just started the reverse gear on the corruption pandemic.!!!

How come muchawi Raila,jambazi Uhuru na hii tu-kondoo dogo dogo do not answer the question of financing BBI?Or wear the two gangsters to continue taking loans for looting after salary payments and other Kenyans including tu-kondoo continue with repaying?

SHAME ON YOU UHURU!!!

Let us all draft Ndugu Kivutha Kibwana to take the presidency of Kenya come 2022. He does not have a collection of skeletons in his closet that we know about!

Mwalimu Kibutha is one of the most intelligent people in Kenya.He can easily unite Kenyans and enforce the laws which is his profession.The guy can help tame Kenya’s No.1 problem,corruption as he suits in all classes of people.

We talked about this...we knew that BBI WAS going to pass through Senate, but for once the JUDICIAL system did what pertains to the masses.
But... REVOLUTION IS COMING.
ALL DYNASTIES WILL HAVE TO GO AND REFUND ALL THEY HAVE STOLEN SINCE INDEPENDENCE.