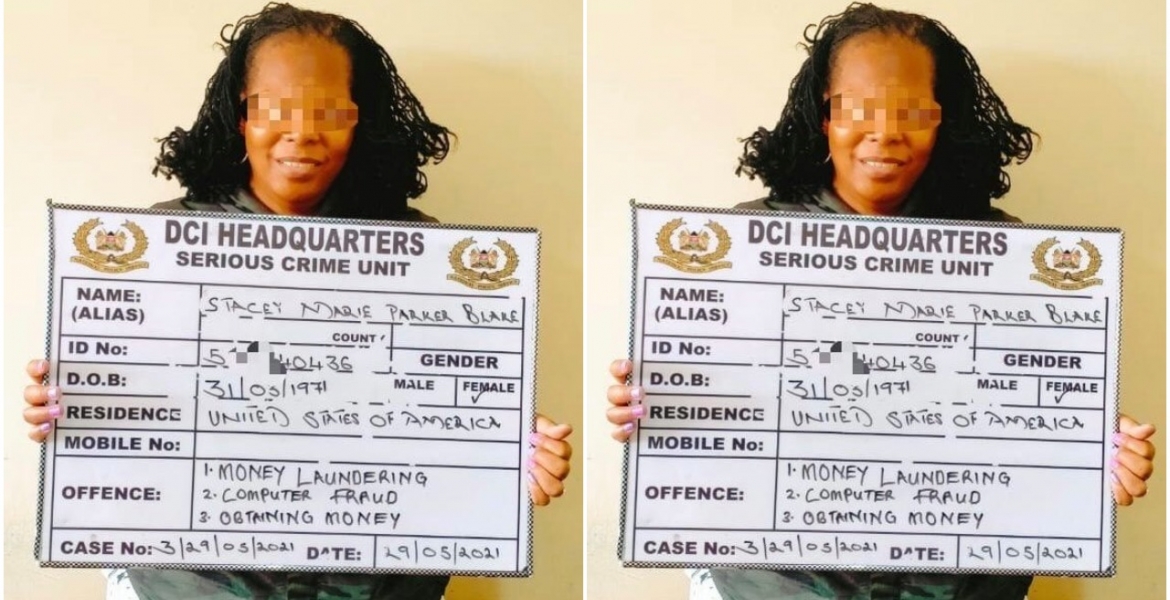 A suspect linked to the Amazon Web Worker Ponzi scheme has been arrested by detectives from the Directorate of Criminal Investigations (DCI).

Stacey Marie Parker Blake, 50, was apprehended on Friday upon landing at Jomo Kenyatta International Airport (JKIA) in Nairobi from the US.

Her arrest followed intensive investigations that linked her to the Ponzi scheme in which Kenyans were defrauded of millions of shillings.

“In a well-coordinated and orchestrated scheme, investors were duped into investing their money in an online app known as Amazon Web Worker, on the premise that they would earn huge profits of up to 38% for a deposit lasting only 7 days,” DCI said.

“Social media platforms were awash with advertisements wooing Kenyans to the mouthwatering scheme, that promised to double one’s deposits in a month. In one such advertisement, investors who deposited Sh100,000 were promised Sh351,000 after 30 days.”

Hundreds of unsuspecting Kenyans downloaded the app, registered, and made their deposits while referred their spouses, children, and close friends to the scheme in a bid to make a fortune overnight.

“It is not until when the app was deleted from the internet without prior notice, that the investors discovered they had been duped. They were shocked to learn that the app was not in any way linked to Amazon, a multinational technology company based in the United States,” said DCI.

“The app went down with deposits worth hundreds of millions of shillings from gullible investors, who had hoped to hit the jackpot, once their deposits earned profits.”

Detectives linked Stacey to the syndicate after investigations revealed that she had pay-bill accounts in her name that had a balance of Sh50 million, believed to be deposits made by Amazon Web Worker victims.

Detectives are also pursuing other suspects believed to be part of the syndicate.

Stacey is in police custody pending arraignment in court to face money laundering, computer fraud, among other charges.

What kind of a Tamaa fool would Believe this Kind of Stuff? A mjinga aliwao.🤗

Stacey M. Parker-Blake is a licensed professional counselor and a proud graduate of Prairie View A&M University. She holds a Masters of Arts in counseling and a Bachelor’s of Science degree in psychology. She has dedicated all of her professional life to helping and supporting those who cannot do for themselves. Bla...bla...bla...

why is she smiling? a non kenyan may ask but a true kenyan knows...

All that glitters is not gold.
Please Kenyans don't believe anything from the west until you can verify.
WHEN A DEAL IS TOO GOOD,THINK TWICE.

Yes, just a plain old greedy lazy thief preying on equally ‘greedy-investors’ looking to gain off the ponzi scheme thinking they’ll rip from the doubled profits before the scheme is discovered and hoping they wont be ‘victims’. Usually in early stages of this scheme, the first investors get some or all of their money back. Its a gamble as you never know at what stage of the scam you are getting yourself into.

She is smiling on the photo as if mocking the Kenya government. Her account had 50 million Kshs roughly 500,000 USdollars enough to pay a lawyer and bribe the judge. A few days in Kamiti and not some fancy jail will wipe the smirk right off her face. She needs to pay that money back before sneaking out of the country after jumping bail which she should not be eligible for

Congratulations Stacey for joining the list of few lucky ones “sweeping/drawing/correcting” money for safe keeping from hungry billionaire Kenyans.You are still welcome after bribing your way out of that small problem.Congame is a professional gift which must be utilized whenever you get a chance ya KUNDANGANYA MAFARA/WAJINGA.At the moment conmen in Kenya are led by Muigai Kamau/Ngina assisted Ruto,Raila,Ngilu,WaKarura Kihika,Karua,Gakuyo,Mumbi etc.Ati Raila represents Omera and Wanjiru-women in looting bra bra bra.