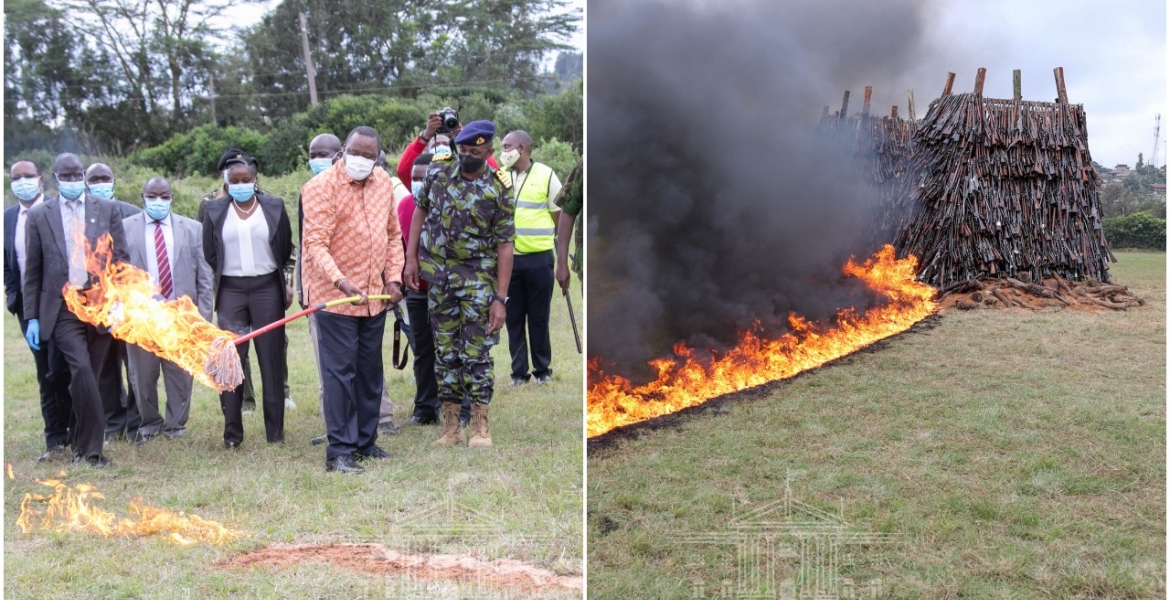 President Kenyatta has offered to give jobs to makers of illegal homemade guns in the country.

Kenyatta said such Kenyans can be employed at the recently launched small arms factory in Ruiru, Kiambu County.

The Sh4 billion facility, the first of its kind in the country, has a single-shift annual production capacity of 12,000 assault rifles. It procures 60 percent of its components from local sources.

Kenyatta spoke on Wednesday during the destruction of 5,144 illegal small arms and light weapons at the Regional Police Traffic Training Center in Ngong.

He said most of the illegal firearms were voluntarily surrendered by the public who heeded government amnesty offers, and through the diligence of security agencies.

“We have seen a variety of home-made weapons, its first of all negative but it is also positive, I want to make an offer, Kenya has started making small firearms, come to us and let’s give you a steady job to make legal weapons, grow the economy and help keep your country safe,” said Uhuru.

He asked those interested in the offer to contact security officers, repudiate the past, and apply for government employment.

“Instead of waiting for police bullets, I know you are there come to us and tell us that you have stopped that crime, the skill you have, help us make legal weapons,” he added.

How about your fellow corrupt politicians? Instead of waiting for your time in office to expire come to us and tell us you have stopped that crime, the skills you have and help us create legal wealth.

This nonsense of rewarding criminals/murderers started with expired murderer Jomo.He granted “opposition leader”,expired jambazi Jaramogi a shs 5m.AFC loan to start SPECTER INT after killings of hundreds of his worshippers during two confrontations with police in Luo land.And instead of arresting Jaramogi for interrogation on his Luoland rival,Mboya murder,cannibal Kenyatta had the loan written off by AFC.Right now Uhuru is stealing billions and changing the constitution for muuaji instead of enforcing the law.RISASI TU.

Lawbreaker rewards fellow lawbreakers. Birds of a feather. This is a new low for the CiC.

Of course he wants to Reward MUNGIKIans.

Uhuru, please put the beer bottle down n rest the coconut in ur head. This people belong in jail as reward for crime is not employment. No wonder crime is so high in Kenya.

grow the economy and help keep your country safe,” said Uhuru.
Is it me or is that an oxymoron?? How do criminals, gaining knowledge and training on firearms to build tools of death make the nation safer??
This is a very bad bad idea. Someone please put away those bad advisors.