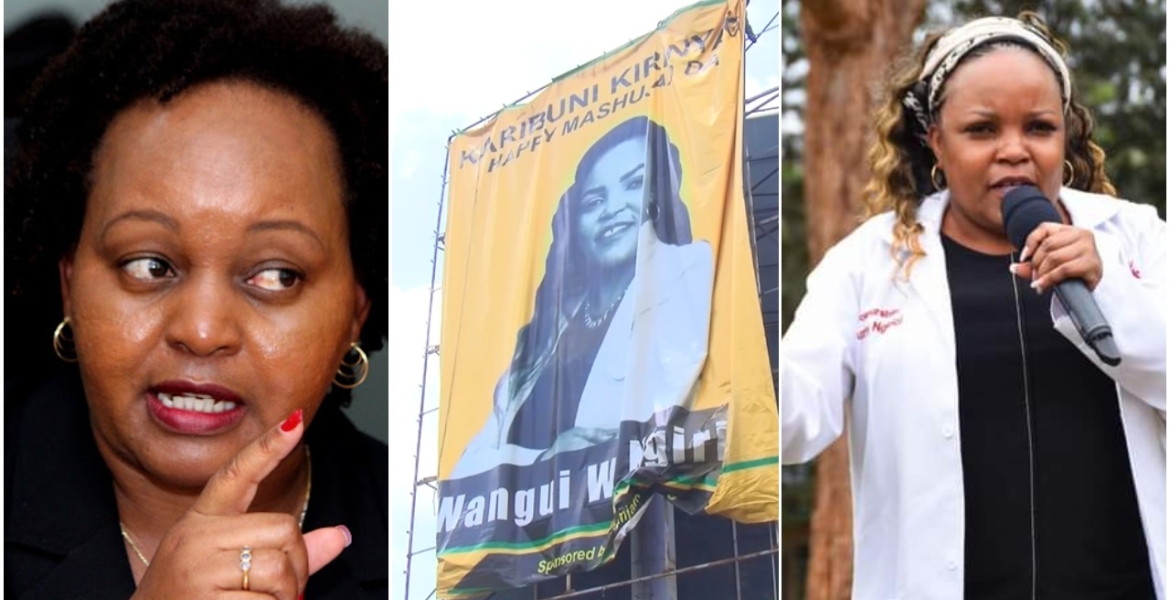 Waiguru had reportedly ordered the pulling down of two billboards bearing the portrait of Ngirici in Mwea town.

On Sunday morning, officials from the county government and a local advertising agency attempted to remove Ngirici’s billboards and replace them with those of Waiguru.

Their efforts hit a snag after area residents protested and blocked them from pulling down the billboards.

The workers were saved from the wrath of the angry mob by businessmen Andrew Ngirici, who is the husband of the woman representative.

Mr. Ngirici asked them to put back the billboards, arguing that the structure under which the billboards are erected belonged to him.

Addressing journalists, the businessman claimed Governor Waiguru was trying to provoke him ahead of the Mashujaa day celebrations to be held in the county on October 20th.

Mwea East sub-County police commander Daniel Kitavi said a meeting would be called between all the parties to the matter. The police commander indicated that the erection of the billboards was part of the beautification process of the town ahead of Mashujaa day celebrations.

Ngirici is eyeing the Kirinyaga gubernatorial position in 2022 and will lock horns with Waiguru, who has declared she will defend her seat.

Karanja Kibicho should be the next Governor of Kirinyaga county.
These two women belong in jail.

Both these two women have been accused of corruption and misappropriation of poor people’s tax money! Now they are fighting over posters while money poor folks don’t have food eat! And the voters are watching all this like it’s a good show!

These two birds of a feather look like sisters fighting over sibling rivalry! These politics must sweet for people to fight like two mad dogs! I think I’m missing out on something here!

The swords were drawn long time ago. The drums of war has been sounding since last general election.
It doesn't matter who wins, because they all belong to the HYENAS VIP CLUB.
ALL ARE CORRUPTED TO THE CORE. ALL HAVE DRAINED THE GOVERNMENT COOFERS.
IT'S TIME FOR A NEW GENERATION OF LEADERS TO EMERGE.
THE MASSES THINKING THAT RAILA, RUTO ,WANJIGE, KITUYI ETC, WILL RESCUE THEM IS JUST AN ILLUSION. THEY ARE ALL FROM THE SAME CLUB, FROM THE SAME SCHOOL OF THOUGHT, ALL WERE DEVELOPED BY MOI. CHANGES HAVE TO COME FROM WITHIN OURSELVES. WE NEED TO REEVALUATE OUR INNER SELVES AND CHOOSE WISELY.
IT'S A SHAME THAT AFTER ALL THESE YEARS OF INDEPENDENCE WE STILL ASSOCIATE OURSELVES WITH ETHNICITY.
IT'S TIME FOR ONE NATION, ONE PEOPLE, REGARDLESS OF WHAT YOUR LAST NAME IS.