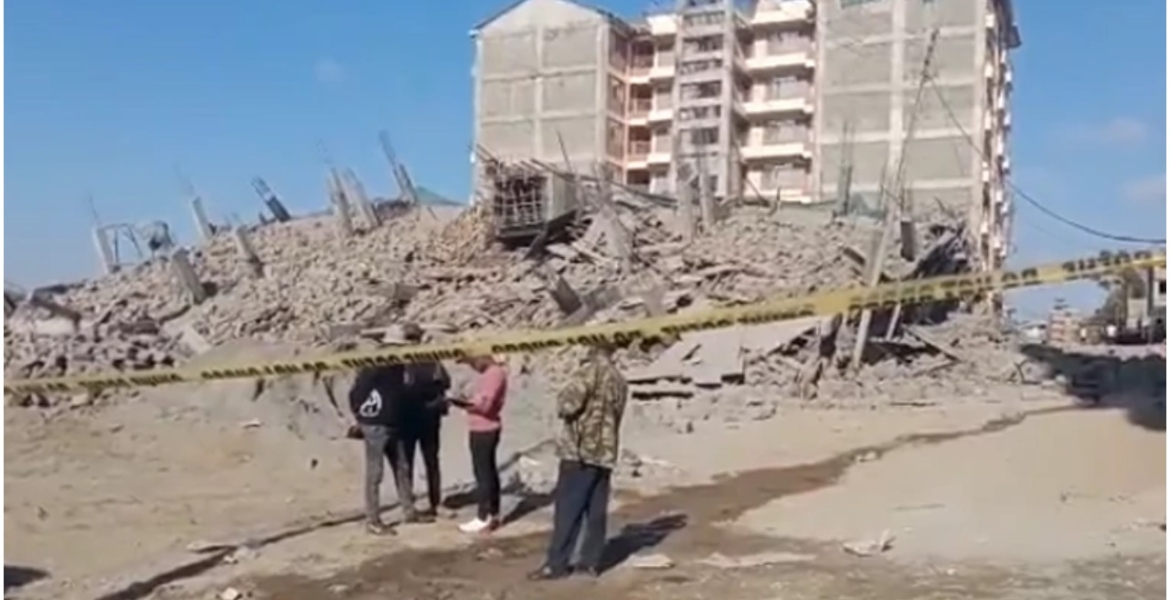 A nine-storey building that was under construction in Ruiru, Kiambu County has collapsed.

Reports indicate that the unfinished structure in Ruiru’s OJ area caved in at around 3:30 am on Sunday.

No casualties were reported as nobody was inside the building at the time of the incident. Several motor vehicles parked in a nearby garage were damaged during the early morning incident.

An eyewitness said they heard a loud bang at around 3:30 am and scampered for safety together with other night guards. Police cordoned off the scene as investigations into the cause of the collapse continue.

Cases of buildings collapsing have been on the rise in Kiambu County in recent months.

On August 30th, a five-storey residential building collapsed in Gachie area, Kiambu County. Three construction workers who were trapped in the rubble died while more than 10 were rescued and taken to hospital for treatment.

A few days later, a six-storey residential building in Kinoo was safely demolished following orders from the Kiambu county government and the National Construction Authority (NCA). This came days after the structure partially collapsed in an incident captured on video.

Monkeys must climb trees, no putting up stones as sky skrepas.

Saving on cement - a.k.a add more sand - and inexperienced laborers cost less money..wooii cheap is expensive..pole to the owner

Good
“Cases of buildings collapsing have been on the rise in Kiambu County in recent months”
There’s corruption in Kenya but if there’s a community that’s entrenched deep in the vice, it’s the Kikuyu! (Closely followed by Kales)
They are irredeemably corrupt & evil. It’s a good thing this one collapsed, more so at wee hours of the morning at 3.30am and nobody got hurt. My biggest worry is the many still standing buildings whose construction was compromised in a bid to save money and which can collapse any time
Kikuyus from old Kenyatta to the current one have completely destroyed Kenya. Even Moi learnt from Kenyatta ......... they may be hardworking & relatively intelligent but also very evil & corrupt compared to others

Mlachake should explain how he connected the 7m AGikuyu to the collapse of the building being built by a MuKamba known as Kiema.Why blame other AGikiyu even if it was being built by Njuguna?The likes of Mlachake even believe they are represented by their tribal gods in looting.BONGOMAVI BURE KABISHA

I guess Mlachake has not been to River Road which also has buildings built by Kikuyu's. Or Nyeri, or Muranga or Nyandarua, etc. Building build by other tribes never collapse; going by Mlachake's logic...someone help me understand him.

It is fortunate that this buildings are collapsing without people in them.If this there is a rise in these acases in Kiambu county,I compelled to think that its is not a mere coincidence.Something is going on there that is not structurally sound...We need answers.