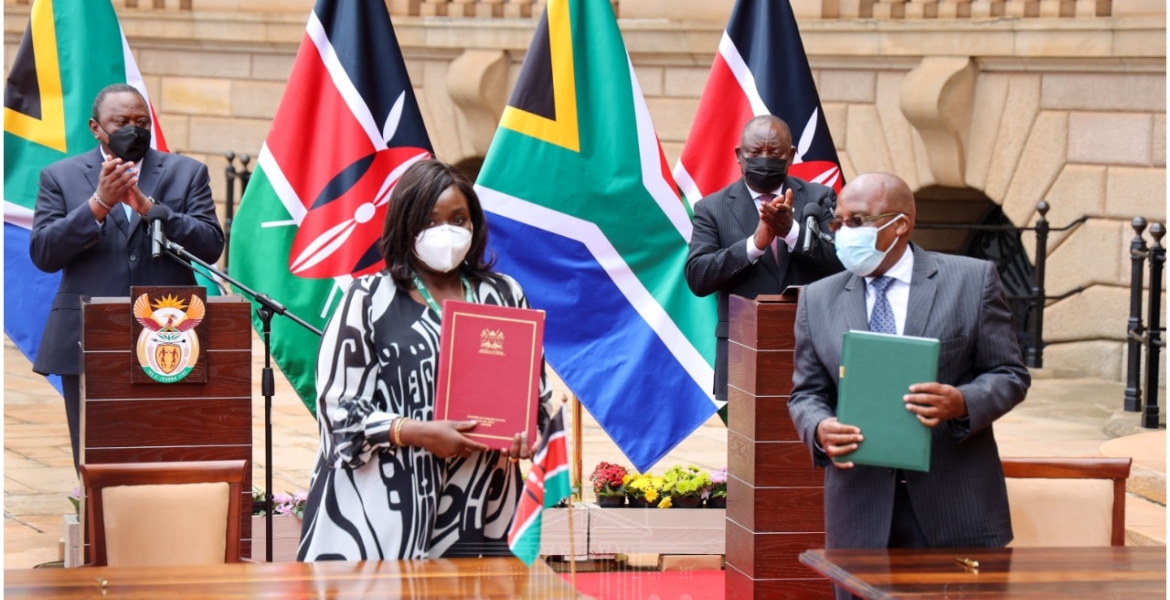 Kenya and South Africa have inked eight key bilateral agreements, ushering in a new dawn of cooperation between the two countries.

The signing of the agreements was witnessed by President Kenyatta and his South African counterpart Cyril Ramaphosa on Tuesday.

The two leaders had earlier led their delegations in bilateral talks at Union Buildings in Pretoria, the official seat of the South African government.

The eight agreements include MoU's in transport, health, diplomatic consultations and training, tourism, and migration.

Others are a Bilateral Air Services Agreement (BASA), and MoU's on government printing works and the return of nationals refused entry and illegal entrants.

Speaking after the signing ceremony, President Kenyatta said the Kenya-South Africa diplomatic ties of close to 30 years had come of age.

“In addition to strong bilateral relations which span a wide range of areas, Kenya and South Africa are close partners at the regional and global stage,” he said.

Kenyatta, who is on a three-day State visit to the Southern Africa country, further reiterated Kenya’s commitment to work with South Africa in driving the aspirations of the people of the two nations through the promotion of the African agenda.

“…you will agree with me that it is only by working together that we can achieve the desired outcomes for closer bilateral cooperation and strategic partnerships. We have definitely made good strides. However, there is scope to even do better,” he added.

He also thanked South Africa for supporting Kenya’s bid to join the UN Security Council as a non-permanent member for the period 2021 to 2022.

On his part, President Ramaphosa, “President Kenyatta and I have reaffirmed the strategic importance of bilateral relations between our two countries and reiterated our desire to elevate the nature of the relationship, which would include the conclusion of a Strategic Partnership Agreement.”

The ministry of transport in Kenya has failed the Kenyan. Driving on Kenyan roads is a total mess , there is no order
Mr Macharia why cannot we no order in this country.Jam is the order of the day, due to cars over rapping. Pse stop over rapping is the card, blocking each other hence jam all over