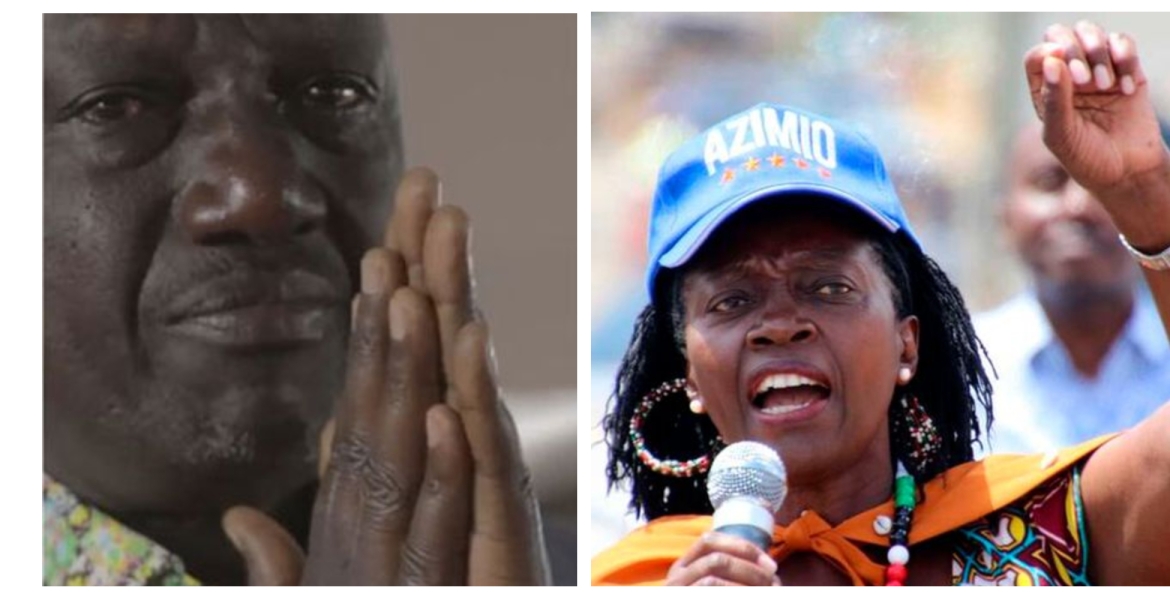 Azimio La Umoja-One Kenya coalition party presidential running mate Martha Karua has taken a swipe at Deputy President William Ruto after he broke into tears during a prayer service at his Karen residence on Tuesday.

Karua, who spoke during a campaign rally at Bukhungu Stadium in Kakamega on Wednesday, said Ruto should stop pretending to be more Christian than others, stating that Christianity is not about showing one’s tears, but rather actions.

“Wacha Ukristo wako ujitangaze, si wewe kututangazia. Jesus Christ has no deputy...stop pretending to be his deputy on earth, he belongs to all of us.”

She further told off Ruto and his allies for questioning her faith and that of Azimio La Umoja-One Kenya coalition presidential candidate Raila Odinga, saying only God has the authority to judge people.

“I joined politics before some of my rivals...you have found me in politics while going to church but in this late hour, you want to doubt my Christianity? Wait for judgment by Christ when we all go to heaven," she stated.

“They have found my boss (Odinga) serving in Parliament as a Christian in the Anglican Church like me, who are they now to start claiming he is not a Christian? Si kila mtu anasema ‘Yesu Yesu’ ataona ufalme wa mbinguni…leave us alone and do your own campaigns.”

During the prayer meeting presided over by Bishop Mark Kariuki, Ruto was seen shedding tears after seemingly being overcome by emotions. In his address, the deputy president termed the forthcoming election as more of a spiritual battle than a political contest.

"I think for the first time in Kenya, this election is more of a spiritual battle than a political contest and that is why we have all manner of things that are going on today," said Ruto.

matharao wafalaz seems to be running out of not just ideas or plans but insults too huh? anyone who wanna cry can do so...kwani nini? are we gonna really debate about a human being, being emotional? really? when they go low we go high!!!! liweliwalo dynasties must go!

The debate is about the emotional wellbeing and character of a man who wants to be president of Kenya.

If Ruto can fake tears to prove he is closer to Jesus Christ than others, then its important to discuss what ruto would do if a country is in a state if crisis. Please do not myopically minimize Ruto’s antics which had been choreographed to hoodwink voters if the religious faith.

Ruto himself has lied that his intent to run for presidency is based on spirituality and not politics. Lets be real about the ill intentions behind Ruto’s candidacy. Ruto does not have the monopoly to God like he wishes many to believe.

The debate is about the emotional wellbeing and character of a man who wants to be president of Kenya.

If Ruto can fake tears to prove he is closer to Jesus Christ than others, then its important to discuss what ruto would do if a country is in a state if crisis. Please do not myopically minimize Ruto’s antics which had been choreographed to hoodwink voters if the religious faith.

Ruto himself has lied that his intent to run for presidency is based on spirituality and not politics. Lets be real about the ill intentions behind Ruto’s candidacy. Ruto does not have the monopoly to God like he wishes many to believe..

Jesus the thief. The real Jesus did not steal.

Martha that is too personal. You should tame down your vitriol. You appear the fool in this case...respect others relationships with God...We all are aware back in those days of 1990s you were found in with Father Wamugunda feigningcarjacking in a maize plantation usiku. How have you forgotten this virgin Martha. Ulipatikana kwa maindi Limuru Kwa Mera mkiwa na Father Wamugunda mukifanya nini usiku. Bure kabisa!

Conish Karua hates Christians because Father Wamugunda could only take her into the bush! Not even a room with a bed🤪

Karua is Kenya's Kamala Harris I hope this witch does not become VP of Kenya.

Don't compare her with Kamala.

I don’t understand how the Azimio deputy Lucifer thinks that DP Ruto is deputy Jesus.

The crybaby thinks he is the only one that has the preserved right to enter Heaven on the judgment day. Those who pretend to be christians and have a tendency of passing the spiritual judgment should understand that God does not favor their skewed state of mind.

Ruto’s tears inside the Church were self seeking and unrighteous indeed. His emotional breakdown leaves a lot to be undesired. He is a huge hypocrite and he knows it. He faked his tears to hoodwink voters with an intention to gain sympathy.

Surely Ruto is such an ugly dude - just look at his feigned monster face. He looks like wet faced Glimlin animal. The face in itself should make Kenyans think twice about voting for Ruto. Adolf Hitler used to cry the same way to hoodwink Germans. He ended up butchering 6,000,000 innocent Jews. Watch out Kenyans.

Ruto was laughing when he burned little toddlers and women in 2007. He also tear gased kindergarteners as he was planning to steal the Weston hotel property. I have difficulties reconciling the ruto who killed young children and the crybaby we are witnessing here. Something is seriously wrong with Ruto’s state of mind and his dirty political games. What we see here is very dangerous fir Kenya. Its very disturbing to many Kenyans. Unfortunately the church has decided to join in Ruto’s dramas by being judgmental about the faith of other kenyans. Very sad indeed.

Ruto wants to be Ayatollah.
A religious & political leader.

Kenya sio Iran. He can take that Nonesense to Iran if he admires that style of leadership. Alaaaar!

DP Ruto fails to understand that every body has and is entitled to their christian faith. Ruto should humble himself and understand that one does not get spiritual credit for shedding tears, wailing and crying in church to influence public opinion based on the intended political objectives. Evan standing on top of the roofs does and shouting the bane of Jesus the loudest does not qualify him to have a seat on the right hand side of God the Father. Jesus referred to those kind of christians as hypocrites. We as Kenyans must be very careful in passing judgment regarding the faith in Cheist that others possess.

…. and madam Karua thinks that she is deputy God?!?

If Jesus run for president we'd call him a thief, not saying Ruto is falsely accused but kenyans have two bad choices. Raila will bring the greatest inflation with his Ksh 6,000 handouts and other socialist policies.

Hey Virgin Martha Karua, the most blessed woman chosen by Raila to help get Kikuyu votes, be the last to talk. We haven't forgotten that back in Kibaki time or last Moi rule you as an MP was caught in a maize farm in Limuru at night after carjacking with a Father Wamugunda UNO chaplain. What were you doing at night with a man of cloths if not usherati?..

I personally would rather be governed by laws of the land ,and people abide by then, than law of religion that people keep on ignoring.
There are many countries in the world that one would term as atheists,and you will be surprised by how well they live,or rather have a higher standard of living than those to profess their religion.
Folks, let's not confuse integrity with religion.If Kenyans are honest with themselves,all they want is someone who can improve their standard of living;that is find ways to help reduce unemployment, crime, poverty, improve healthcare,and improve general security,by reducing insecurity,and improve education.If that person worships snakes so be it,that's his or her prerogative.