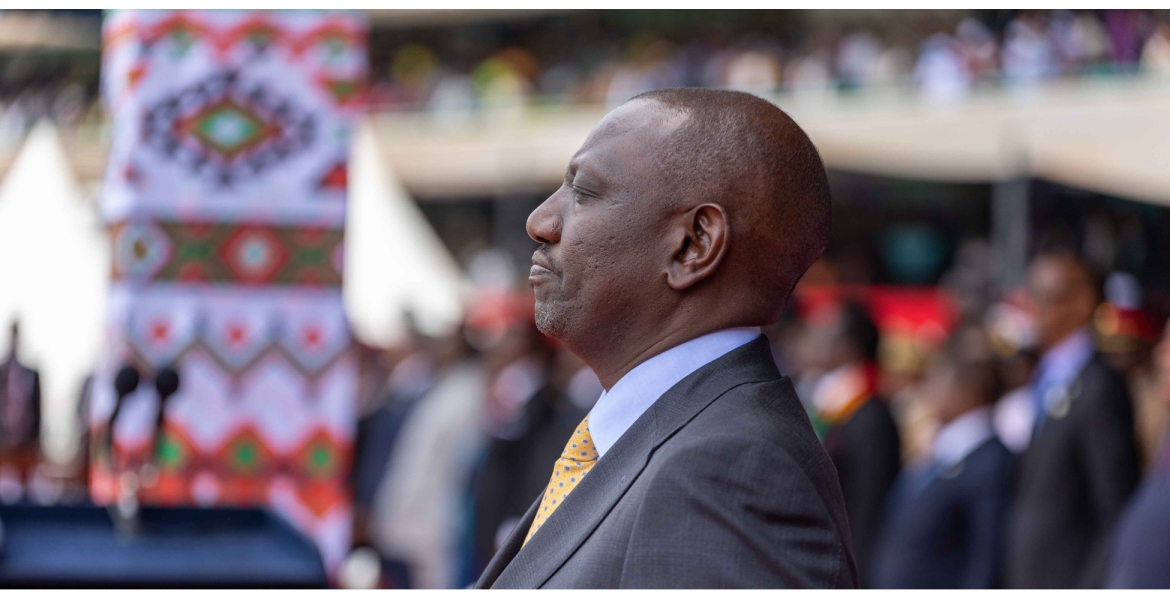 President Ruto is among the world leaders who are expected to travel to London to pay their respects to Queen Elizabeth II, who died on September 8th.

Queen Elizabeth II will be buried next to her late husband Prince Philip in the King George VI Memorial Chapel on Monday.

This will follow her state funeral at Westminster Abbey, which will be attended by more than 2,000 official guests including presidents, princes and prime ministers from across the globe.

US President Joe Biden, President Cyril Ramaphosa of South Africa and Prime Ministers Justin Trudeau of Canada, Anthony Albanese of Australia and Jacinda Ardern of New Zealand are among those expected to attend the funeral service, according to the New York Times.

A spokesman from Ruto’s office confirmed to the publication that Ruto, who was sworn in as Kenya’s fifth president this week, will also make the trip. This will be his first foreign trip since his inauguration.

Before the state funeral, her coffin will be transported to Westminster Abbey on the state gun carriage, The Guarding reported on Thursday.

After the service, there will be a long procession from Westminster Abbey to Wellington Arch, with King Charles leading members of the royal family walking behind the gun carriage.

Her coffin will then be transferred to the state hearse, and travel by road to Windsor. The committal service, attended by 800 people, will be held at St George’s Chapel. Later that evening her family will attend a private interment service.

The ink has hardly dried could not wait to drain that expense account.Na bado hardly a week and he is off just like Uhuru all over the place to provide all expense paid shopping trips to looting buddies maybe a stop over in Switzerland where all the money will be funneled

Our president now has a good chance to rub shoulders with the real world power brokers! Wishing you all the success Mr. President!!!

@Juju what are you celebrating? The man is spending tax payers money. We all saw sudi in a military chopper

@BamaMore Ain’t celebrating nothing but the president must network with world power brokers. They aren’t in Ichaweri or Sugoi! See the big picture village boy!

Lord Acton writes to Bishop Creighton that the same moral standards should be applied to all men, political and religious leaders included, especially since “Power tends to corrupt and absolute power corrupts absolutely.” (1887)

This is beyond shameful!

Your presence is neither needed nor required. You could put that money to better use like lowering the price of unga.

As Britain honors their hero- the queen Its time for President Ruto to ask for the remains of our heros Koitale Arab Samoi's and to ask where our hero Dedani Kimathi is buried.
Its a shame to attend to such funeral.
Our government will spend millions in five star hotels while the same government has not even reduced the cost of living for the regular mwananchi in Kenya.
The coffers are empty; where is this government getting money for useless trips?
How many are attending?
Who will foot the bill?
Of what benefit is this trip to Kenyans?
It is a mockery to mourn our colonizers.
We pray that our colonizers get what they gave to our forefathers.
If they gave our forefathers peace and tranquility, let them get the same ten fold;if otherwise, let them get the same ten fold.
This government needs to be different from the previous one!!
Where is the opposition to question this expenditure?

Hard to believe that he is going for funerals. We haven't forgotten how he used to criticize former PM for attending funerals.

Wr stupid under common wealth so he is ok to go thou personally singeenda ningetuma mzee wa kitendawili to keep him busy.

Ruto has to play the political games begin played around the world.
Africans don't really care whether the queen is dead or not. She died without acknowledging the mess they did around the world. Independence was given not by the masters,but after the masses rebelled. All freedom fighters movement were deemed as terrorists groups,only for the same to end up ruling.
She had her chance to correct what her forefathers did, but chose not to.
Her family will mourn her, but for the masses they killed ,none will.
But, Ruto understands the what photo opts mean.

President Kipchirchir Samoei Arap Ruto:
Please cancel your trip to the UK in honor of the people of Kenya who lost their lives and land stolen by the British. You seem to lack “Critical Thinking Skills” on this historic and important issue.
It is wrong, insincere, and insensitive for you to attend the funeral of the late Queen of England. Why? It was during her time in power that the state of emergency was declared in Kenya on October 20, 1952. The following six were arrested: Kungu Karumba, Oneko, Kubai, Kamau, Ngei, and Kaggia and sent to detention in Kapenguria.
Following the declaration of the state of emergency, the British soldiers were sent to Kenya to quell the uprising. Thousands of freedom fighters and ordinary Kenyans lost their lives.
During the struggle for the liberation of Kenyan, the Land and Freedom Fighters attacked my parents at night for preaching a foreign religion that is based on the late “Son of Yusuf and Mariam.” Although my parents prayed every day, their prayers did not prevent the freedom fighters from attacking us. I nearly lost my mother when she bled profusely after her neck was cut by a machete.
This reminds me of a similar incident that happened in Kiambaa church following the presidential elections of 2007 in Eldoret. Believers of this foreign religion sought refuge in a church and prayed for their safety. All lost 37 people lost their lives in this church and their prayers did not prevent the arsonists from killing them.
Kenya Colony and Protectorate was established on July 23, 1920. British people migrated to Kenya and stole 5 million of the best lands from the 3 million legal inhabitants. Following the end of the Second World War where Kenyans were drafted to fight, the returned soldiers came back and were discriminated by the British in their daily activities.
A fierce fighter against the British illegal occupation of our homeland the famous war hero Kimathi wa Ciuri was arrested on Sunday, October 21, 1956, and hanged on Monday, February 18, 1957. The British have refused to identify the location where he was unceremoniously buried.

Dedan Kimathi would fight these black colonialists just as much as he did their European counterparts.

Stop judging fools , maybe volunteers will pay for his trip just like his SCOK legal team did!

2 things I know Ruto won't do while in the UK. He won't land at the funeral in a chopper and he won't be given the opportunity of giving a speech. However, he might enquire where the property titles of Balmoral Castle and Kensington Palace are stored.

YOU CAN NEVER CONVINCE ME THAT KENYANS(half of 2022 registered voters) MADE THE RIGHT CHOICE WITH RUTO. HAMJUI RUTO!

President Ruto foreign policy, I'm making alot reservations on this...He has been smart handling his political chase-game with his fellow Kenyans minds but with foreign policies?? Its different waters ..he's still unwise & will cost him!!..