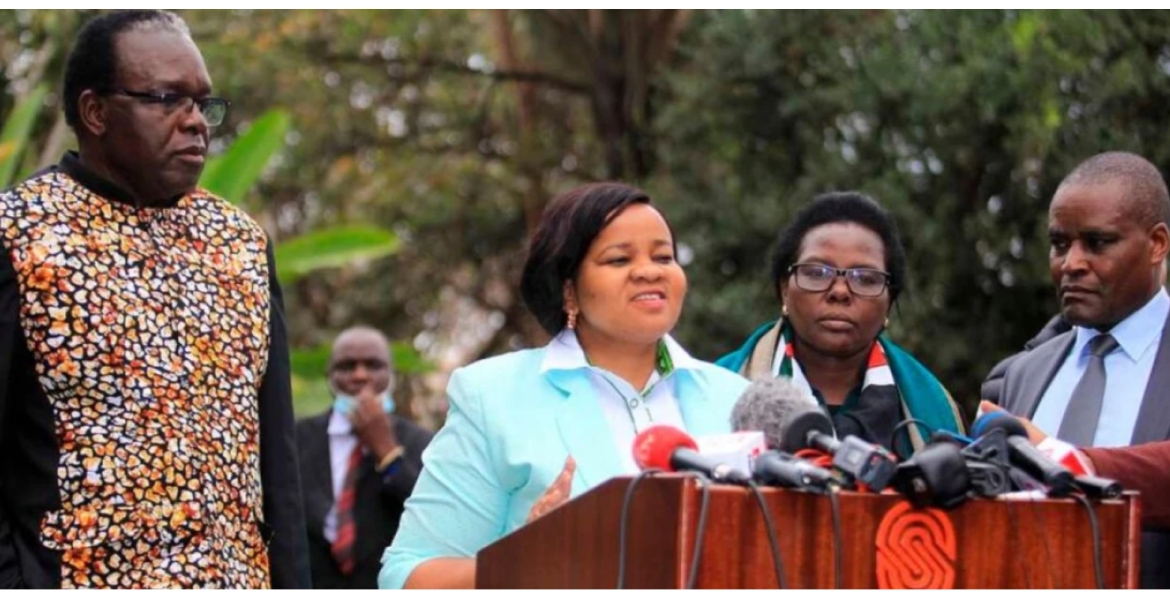 Azimio La Umoja One Kenya coalition has vowed to resist any attempts by President Ruto-led Kenya Kwanza Alliance to remove the four IEBC commissioners who disowned the results of the August 9th presidential election.

The four walked out of the national tallying centre at Bomas of Kenya on August 15th, claiming that the results the IEBC Chairperson Wafula Chebukati was about to announce were ‘opaque.’

“The petition by Farmers Party expresses the conduct of the commissioners as being a gross violation of the constitution and a breach of their oath, which denies the 4 commissioners their legitimacy to hold the state offices as commissioners of the IEBC,” the party said.

But Azimio co-principal Kalonzo Musyoka termed attempts to oust the four IEBC members as an act of witch hunt, saying the coalition will do all it can to protect them.

"We totally condemn this brazen act of witch hunt and demand that the President and his agents, leave those officers alone. On our part we commit to do whatever it takes to protect those officers from any attempts to infringe their basic rights," Kalonzo said on Saturday.

At the same time, Musyoka castigated President Ruto’s decision to scrap the subsidy on maize flour and fuel, saying it demonstrates that Kenya Kwanza's bottom-up economic model would not be implemented by his administration.

"What a quick about turn when the ordinary Kenyan struggling to afford a meal a day, a government that can't feed our people has no business being in office," said Kalonzo.

"Why has the so-called Hustler narrative disappeared so soon? This is a mockery of the basic intelligence of the consumers and it must be seen for what it is."

The four criminals must be prosecuted and removed from public office! Being on the side of criminals isn’t a winning strategy!!!

Your Kipara-Hongo needs to Go down Under quick like Moi, Biwott, Kivuitu, Kibaki, and You.

those four deserve to be in jail

I think if the four IEBC were appointed they can be disappointed. That's how it goes. The appointing power has the right and authority to disappoint and dismiss.

We shouldn't make politics like a piss contest. Why don't we have an independent commission hearing and see where the four were coming from under oath. Let them be grilled. Let's also have the other 3 still under oath. Then let Kenyans decide on the way forward. I have said it before and I will keep repeating it, Kenya doesn't belong to the chosen few, it belongs to the masses.
I really hate when politicians think that they are the voice of the people, self chosen.

That’s double speak from the Azimia team. Raila on record agitation for the reformation of IEBC and Supreme Court. How does he want to reform IEBC if he is protecting the 4 commissioners. The 3 other commissioners, Chairman included are retiring in three months time. That means we are left with 4 opaque commissioners to do reform on them!

@Juju I support yr statement they wanted to start chaos’s like their devil rao who is their leader.If you check the same statements they read was exactly the same statement muuanji Rao was reading too but Mungu ni nani chaos never happened.If they are smart enough they r to exit b4 embarrassed juu watatolewa whether the baba vomit or have diarrhoea

Here we go..Impunity being guarded

Stop wasting time on witch hunt. Elections are over. Time to govern now. Where are the promises you promised to mama mboga and the boda bodas? Solve unga prices, fuel costs and electric costs. Harassing perceived enemies won’t help you.