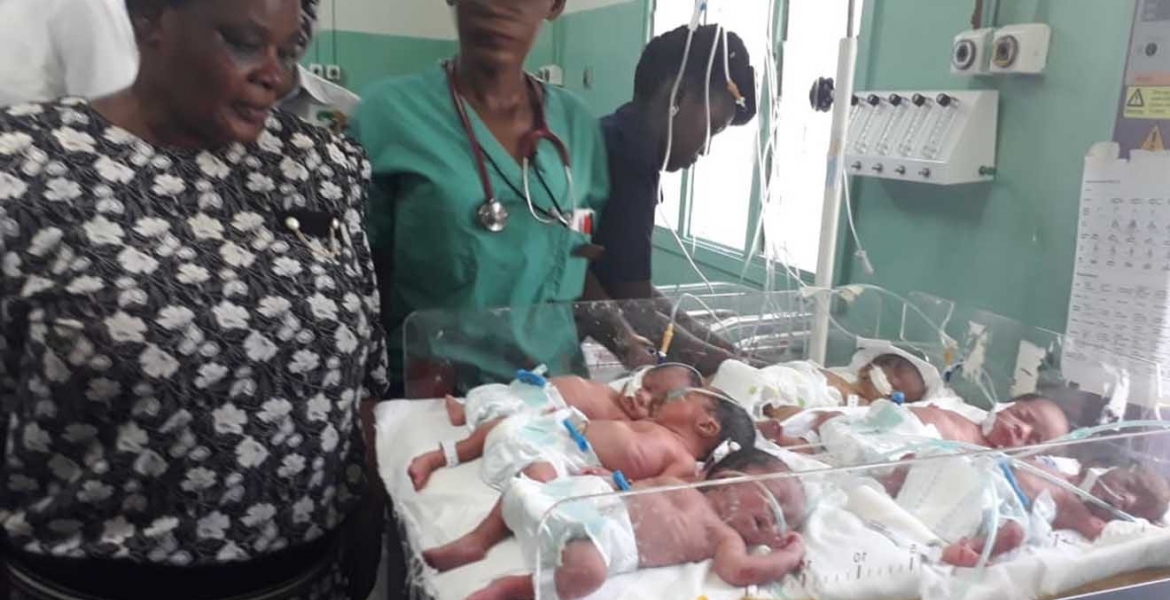 Evelyn Namukhula, the Kakamega woman who gave birth to quintuplets last week, has refused to breastfeed three of the infants following and order from Luhya elders.

Addressing the press over the weekend, Luhya elders said giving birth to five children is a sign of bad omen among the community.

The elders say that their customs only allow a woman to breastfeed a maximum of two babies, and want the rest killed.

They argue that this allows the mother to breastfeed and successfully raise the remaining two babies.

"According to our tradition, one is not supposed to give birth to more than two children. If that happens we consider it a bad omen and the extra three children need to be eliminated. If she breastfeeds more than two she'll lose all the five," the elders say.

Namukhula has not breastfed three of the babies for fear of the wrath of the ancestors.

The 28-year-old mother of nine successfully gave birth to the five babies last Wednesday at the Kakamega County Referral Hospital through Caesarian Section.

The infants were later taken to the Moi Teaching and Referral Hospital (MTRH) in Eldoret after they developed breathing complications.

MTRH CEO Wilson Aruasa says two of the babies are in unstable condition while the rest are out of danger.

That is primitive tradition. If they kill them they will be treated like any other murderers. To hell with tradition.

I have ALWAYS termed 99% of LUHYAs (and Maragolis) as FOOLS; including those in Diaspora (especially those in Oklahoma city, OK, El Campo, TX, Houston, TX, Spring, TX, and Missouri City / Woodlands, TX.

This woman is blessed, she need to take her infants and move away from that insanity. Do the Luhya community understanT how MANY WOMEN OUT THERE WHO PRAY AND NIGHT JUST TO HAVE A CHILD AND BESIDES WHAT IS THE VALUE OF LIFE TO THESE PEOPLE. yOU PROFESS TO CHRISTIANS AND IT IS WRITTEN IN YOUR BIBLE "THOU SHALL NOT KILL" And you are talking about taking three lives because of your traditions?. Bure kabisa. You try it then you will be arrested and charged with CAPITAL MURDER X3.

And the Bastards are Jealousy of her BLESSINGS. No wonder many of their Daughters are Matasas.

This woman is blessed, she need to take her infants and move away from that insanity. Do the Luhya community understanT how MANY WOMEN OUT THERE WHO PRAY AND NIGHT JUST TO HAVE A CHILD AND BESIDES WHAT IS THE VALUE OF LIFE TO THESE PEOPLE. yOU PROFESS TO CHRISTIANS AND IT IS WRITTEN IN YOUR BIBLE "THOU SHALL NOT KILL" And you are talking about taking three lives because of your traditions?. Bure kabisa. You try it then you will be arrested and charged with CAPITAL MURDER X3.

Good God. This is pure madness people. No common sense from these folks. This is not a tradition, it is craziness. There are tons of people who cannot get babies. This brave mother is blessed. Stop your foolishness people.

Some communities in Kenya are still very primitive. Education, the harmonization of tribes or independent from England did not bring equality

THE LEGACY OF THE BRITISH ARTIFICIAL MICRONATIONS: THE CASE OF THE "LUHYA" PEOPLE

After the Berlin Conference (November 15, 1884 to February 26, 1885) Kenya came under the British occupation as agreed upon by the "Global Land looters, murderers, and terrorists" who divided Africa among themselves without the knowledge of the True Lands Communal owners of the continent. Why did I call the land grabbers "terrorists?" How do you identify a person who comes to your land without your invitation, permission, or VISA and takes your land and all your property and when you challenge them they exterminate your people?

As the British settled in Kenya, they started naming some rivers, waterfalls, even lakes in memory of their masters in England. They even went further and started creating new names of the Kenyan ethnic groups that didn't exist before. The errors of the contemporary society is to continue using the words that were chosen by the illegal British terrorists in Kenya.
The two artificial ethnic groups in Western Kenya are the so called "Kalenjin" and the "Luhya."

Unlike the "Kalenjin" who share many traditions and languages among themselves, the "Luhya" don't. When a member of the Logooli and the Bukusu micronations meet, they are forced to speak in Swahili or English because the two micronations are not mutually intelligible.

The Bukusu micronation eats some worms from the cow dung known as the "Amasiviri." The Tiriki micronation eats monkeys. The Bukusu circumcise their men while the Basamia don't. Among the Marachi micronation, a man can marry the sister when the wife dies while among the Logooli people is a taboo.

My point here is to stop generalizations among the members of this artificial ethnic group. This group is composed of 18 micronations whom I want to stress that it is important to treat each group as a distinct micronation.

Why is it that the Mt. Kenya micronations stand tall and are not lumped together and given one name? They individually identify themselves as the:
1. Mbeere
2. Tharaka
3. Chuka
4. Meru
5. Gikuyu
6. Gichugu
7. Ndia
8. Embu

They don't generalize events among themselves like the "Luhya's" do. Yet, their culture is very closely related among these 8 micronations than the "Luhya's." I am challenging the ethnographers, reporters, researchers to stop their over generalizations of this artificial nicronation but rather identify the group by name that they are describing.

hahaha.....well said. Eliminate the elders will eliminate this primitive tradition.

First of all giving birth through caesarean section is not a tradition of Luhyas...
So its Ok for other tribes,and wazungu to give birth to even octuplets,but not these Luhyas?What make them different.
Secondly, do these Luhyas follows all the traditions that their fore fathers,and mothers had?
In todays"scintific world" it is not enough just to invoke culture without proper "documentation".That it is bad luck or an omen is not good enough...
Yes.I have said many times on this forum that we should consciously shed all our counterproductive,and in effection parts of our so called african culture,and customs that harm,and,or deter our progress as members of the human family.

please when u chose which one to eliminate please give me a call i will come pick them up n will bring them up naming them Athamaki kana atongoria jamba n u will swear not to ever come to find them!Bure kabisa

Hats off to you @M.halisi. With such traditions you can best believe the girls would be eliminated because the Boyz can bring a monkey home to roast.

...@mkenyaHalisi just one more question before you can adopt. What if they turn out to be gay🤔🤔? Will the poor souls be safe with you?

Am serious mwakilishi i will keep them 2 kids!My kids are 11 n 7 so instead of me n mama having more we can bring up this 2 mwene nyaga amenibless so we will bring them up.Waafrica tunakuwanga naunjinga sana.Do u know how. many women or couples looking for kids??

Murdering one infant in order for her to breastfeed and rais two is the most dumb and lame excuse ever and you should be hanged! What if the mother dies, do you murder the rest two because she can't breastfeed them?

Three of the kids should be given up for adoption. You cannot trust a woman with such beliefs with their lives.

And where’s the government now,they ought to have rescued those babies and their mother from those outdated criminals