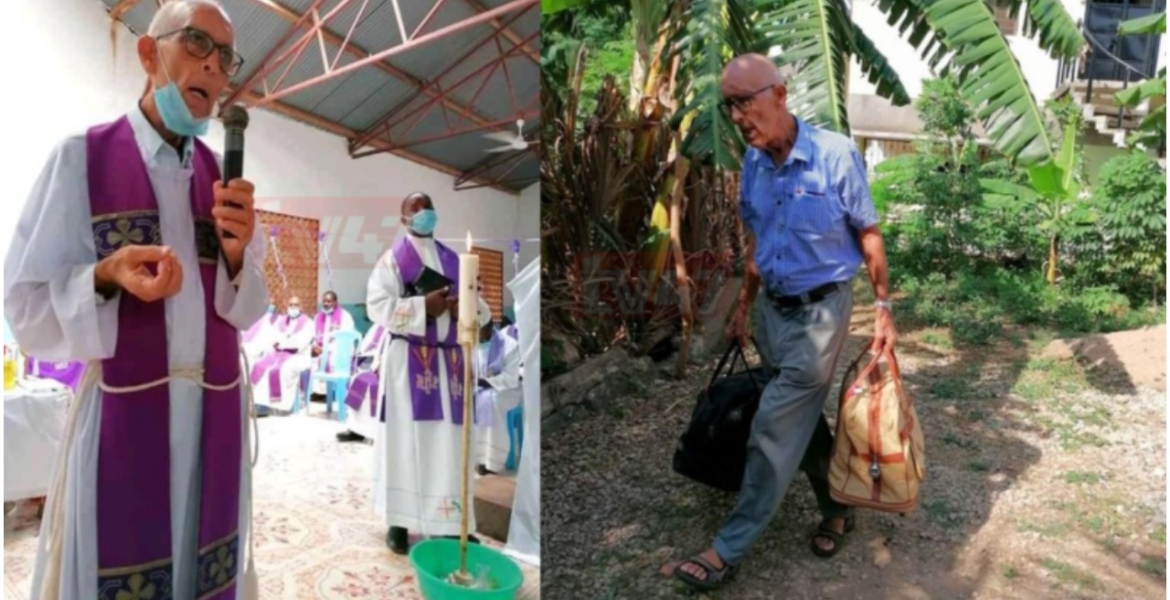 An Italian Catholic priest has received applause after he returned to his country with just two bags after 53 years of missionary work in Kenya.

Father Adolf Poll, alias Alleluia, came to Kenya in 1968 and served in Kisii and Malindi Catholic dioceses until last week when he returned to Italy.

He was known for his selfless generosity and never accumulated any material possessions during his stay in Kenya. As he left Kenya, the priest packed all his earthly belongings into two small bags.

“Father Adolf, 80, packed all of his personal belongings acquired during his more than five decades of priestly ministry in Kenya, in just two small bags, and began his journey home in Italy for his retirement,” Catholic Justice and Peace Commission, Malindi said in a statement.

The octogenarian was ordained a priest in his native diocese of Bolzano-Brixen, in northern Italy in 1966.

Two years later, he left his hometown of South Tyrol to serve as a Mill Hill Missionary in Kenya.

He served in the Catholic Diocese of Kisii for 31 years between 1969 and 2000 before he was posted to Malindi, where he worked till his retirement.

“We thank him (Fr. Alleluia) for the inspiration and selfless service rendered to the area (Malindi). We render immense thanks to God for his life and wish him good health as he returns home,” Mill Hill Missionaries said in a newsletter.

Quite inspiring & humbling! I hope the corrupt Kenyans will take all their illegally amassed wealth to the graves with them!

His belongings (assuming he did not ship his goodies by Air,Sea or Land) reminds me about that verse in the book of Job,not so widely quoted,"naked I/we came to this World and naked shall I/we return"

"He was known for his selfless generosity and never accumulated any material possessions during his stay in Kenya". Sounds like he followed Jesus' teachings the way men,and women of the cloth should.
Its obvious when you pursue wordily material,they tend to distract you if not actually derailing you for the word of God. Especially in Kenya,chasing material wealth would expose you to corrupt and unsavory characters.Who dont follow,or listen to the biblical teachings. Be blessed in your retirement Fr. Alleluia.You left a good paradigm for our priests to follow.

A truly humble and great man of God

Father Adolf Poll has lived a life of what his calling was...
GOD BLESS YOU.

Wishing you all the very best Padre

2 bags impressive ! Howbout then 2 billion bags from the 2 BBI idiots

Meanwhile, our beloved evangelical priests drove to church this morning in a convoy of high end SUVs accompanied by a security detail resembling that of a head of state!