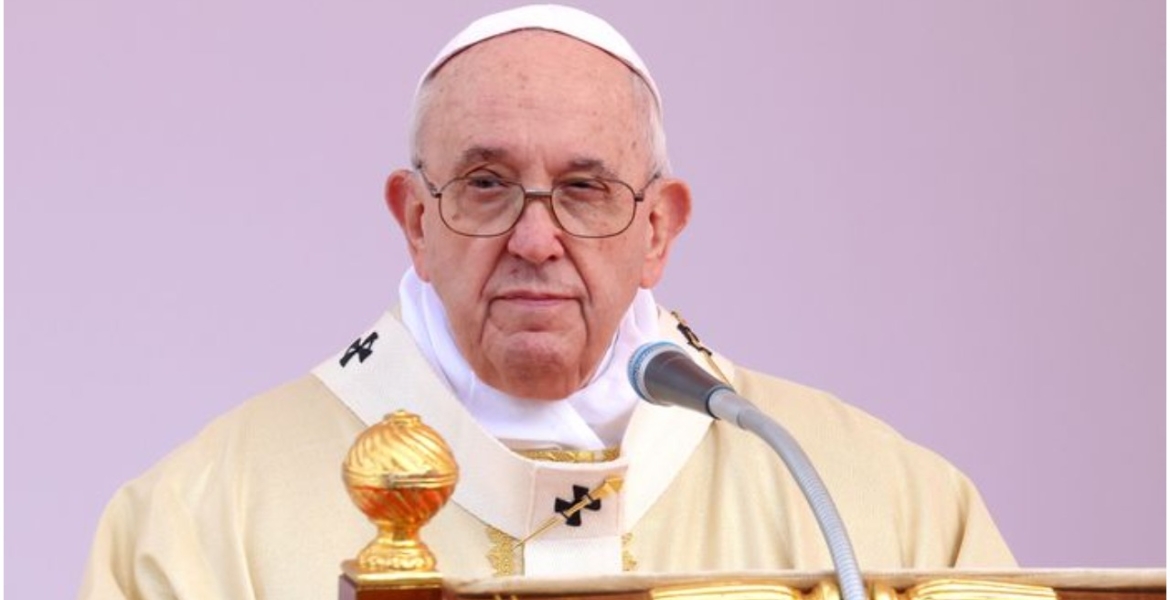 Pope Francis says fornication is ‘not one of the gravest sins.’

Addressing the press aboard the papal plane on Monday, the 84-year-old pontiff termed pride and hatred as the most serious sins.

He was responding to a question about Paris Archbishop Michel Aupetit, who resigned last week following a report that he had a consensual intimate affair with a woman in 2012.

Although the 70-year-old priest denied the relationship was sexual, he resigned to prevent rumors from “damaging the Church.”

“When the gossip grows, grows, grows and takes away the reputation of a person, that man will not be able to govern… and that is an injustice. This is why I accepted Aupetit’s resignation, not on the altar of truth, but on the altar of hypocrisy,’ Pope Francis on the plane back from a trip to Greece.

“I ask myself, what did Aupetit do that was so serious he had to resign? If we don’t know the accusation, we cannot condemn,” he added.

Hey popa the Bible says forbidding to marry is doctrine of devils. Let the men and women to marry to stem tide of abuse and rampant nun abortions.

And ADAMs should marry EVEs; not the Sodom😝 and Gomorrah🤮 NONSENSE advocated by People like Obama.

I say No to priests marrying. Paul was not married. Priesthood is not for people who want to marry,or chase skirts. Not all of us men have a vocation to being priests.Why change the rules because some men cannot zip their pants?Just leave those men out. Simple.

Paul was married. He couldn't hold such a high position as a single man. He lost his wife and kids after following Christ.
Did u buy more crypto?

Thanks for correcting me @ Mundumugo and Shiba inu. I was actually thinking of paul.The guy who said it is better to marry than to burn... was he not single?

I know peter was married but I read that paul was single...anyway that's besides the point. Priests should just concentrate on their work like the pope does.Follow the popal.

Which cryptos are you buying now? Your advise is welcome! I ain’t arrogant. I do ask when I don’t know…..! Thanks!

Number one project is cardano. A must buy. Vechain Shib CRO Dogelon xlm Matic GALA Solana MANA. Metaverse linked ones are hot. If you are a whale then bitcoin and ethereum also

The 1st Pope was Peter and he was married. There were quite a few popes who had been married and others who fathered children outside of marriage. Prohibiting female companionship seems odd at best and against nature at worst and may be the reason the Catholic Church has these scandals pop up so frequently. It also seems to contravene that be fruitful and multiply edict. My 2 cents.

It is generally agreed that the apostle Paul was an unmarried man for the duration of his ministry. Not only does Acts omit any mention of Paul having a wife, but also Paul’s own letters seem to indicate the same. Nevertheless, there is some disagreement over whether or not Paul had been married at an earlier point in his life.

Guest and maxiley @ you must read other books like Josephus, jasher, Enoch etc. They contain other facts not in the bible. E.g. nimrod was not just a man but a giant like goliath. Giants were hybrids who couldn't be redeemed due to animal DNA. Same with the flooded humans and dinosaurs (terrible lizard is the meaning). Satan messed with human and animals DNA. That's why God protected Jesus lineage to make sure he was born of 100pc human. Ref Kevin Zadai

Ah, Josephus. Can you point which of his books you are referring to?

Shiba. Which verse of the Bible is that, that you are quoting or talking about?

1Now the Spirit speaketh expressly, that in the latter times some shall depart from the faith, giving heed to seducing spirits, and doctrines of devils; 2Speaking lies in hypocrisy; having their conscience seared with a hot iron; 3Forbidding to marry, and commanding to abstain from meats, which God hath created to be received with thanksgiving of them which believe and know the truth. 4For every creature of God is good, and nothing to be refused, if it be received with thanksgiving: 5For it is sanctified by the word of God and prayer
1 Tim 4

@inu - surely you do read the Holly Bible and other books! It seems….

How much shi-b should I buy?

I got 28m but someone at church got 725m, that made me look small. I believe in 7 investment Jewish and biblical style. But I would say buy as much coz it's now at its new low. Watch whiteboard crypto and max maher on tube

I got 28m but someone at church got 725m, that made me look small. I believe in 7 investment Jewish and biblical style. But I would say buy as much coz it's now at its new low. Watch whiteboard crypto and max maher on tube

Well said but this is difficult for most to grasp since we ve grown with the Gospel of performance, as if God keeps records of things done in the flesh. That was the law, true Gospel after Jesus is Grace. Thus fear, unbelief takes the precedence of "greater/bigger sins." No condemnation Archbishop Michel Aupetit.

This is Why I advocate for POLYGAMY; a Man and his Wives ad Much as he is able to Afford. After all some of them (multiple Wives) are Unselfishly able to Fend for Themselves (according to ISAIAH Chapter 4🙏).

I’m not sure what koolaid he’s drinking. He needs to stop misleading the church and study the Bible starting by reading Paul’s letter to the Corinthians. We are supposed to flee from sexual immorality, it’s the temple of the Holy Spirit.

Read the BIBLE carefully and you'll Learn that "Some of the Things said Therein were People's OPINIONS" abd not GOD's Words (WORD). And apostle Paul is One of them Opinionated people.

You make no sense and no point at all. I’m no theologian but I read the word. First of all, Apostle Paul’s letters are not his opinion. All scriptures are given by inspiration of God.

Who cares what the pope says

We care because the Pope represents 2.8 Billion followers of church goers on earth.
The missing normality is, he should have supported his though by quoting at least a verse from the Bible.

Quoting the Bible is irrelevant. It was written by men after around 350AD.

This holy man of the cloth must be an African; a luhya at that. He has just passed a cannon law that legalizes polygamy.

And he is Right. Why be a Hypocrite.

This Holy Man of the Cloth must be an African; a Luhya at that. He has just passed a Cannon Law that legalizes polygamy.

Typical chauvinistic response.You are just encouraging your priests to continue their illicit affairs considering the youth are not becoming priests fast enough to replace these old abusers who even in retirement will not admit to their affairs all this when this so called “church” is still to pay victims for what they endured after being converted from “heathens” and trusting these mafisis to save their souls from what only they know.My ancestors were not Christians and they are in the African version of heaven

He is Right when it comes to Men.
1. Remember King Solomon had 600 plus.
2. Women having Multiple partners is Risk; in fact Foolish and Dangerous.
3. We have More women than Men on this Earth.
4. We have a very BIG difference between Sleeping around (Using and Dumping); and LOVING the Other Women (To have and to Hold the Others).
5. Weddings are Superficial, Bragatory, and ridiculously USELESS; do Rather CUSTOMARY Marriages.
6. Who said the Extra women should just Sit there until "Some SINGLE man Appears or Drops from Planet MARS"? And meanwhile they're STARVING in the name of "Men adhering to POLYGAMY" brainwashed by Wazungu idea(s)???????
7. Read the BIBLE Book of Isaiah Chapter 4.
8. And last but not Least: The Choice is the MAN's choice.
Good luck.🙏

You're singing to a BRAINWASHED religious Choir (that has No idea what the Spirit of GOD is saying). All they know is Singing what the Hypocrites and Heretics preach.

The Current Roman Catholic Brother Francis should apologize for the role his religious cult played in starting and promoting African Slavery. Please read what Pope Nicholas the Fifth did!

African Slavery and the Catholic church

On June 18th, 1452, Pope Nicholas V issued a papal bull (a papal bull is a document through which a pope of the Roman Catholic church issues an important public decree, letters patentor charter) called "Dum Diversas” or The Vatican’s Authorization of Slavery that granted Portugal and Spain " full permission to invade, search out, capture & subjugate unbelievers & enemies of Christ wherever they may be... and to reduce their persons to perpetual slavery."
“DUM DIVERSAS.” (English: Until different)
“We grant you [Kings of Spain and Portugal] by these present documents, with our Apostolic Authority, full and free permission to invade, search out, capture, and subjugate the Saracens and pagans, and any other believers and enemies of Christ wherever they may e, as sell as their kingdoms, duchies, counties, principalities, and property […] and reduce their persons into perpetual servitude.”

In the next five years, watuntakuwa wanaoa hata mbwa legally