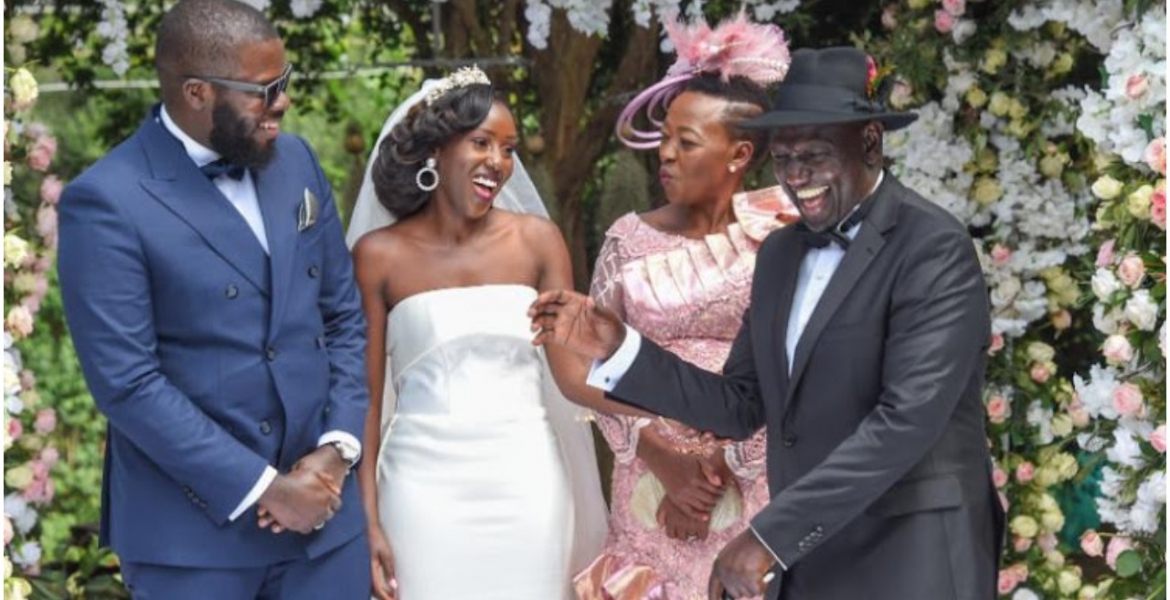 Deputy President William Ruto tickled guests at his daughter’s wedding after explaining why he was hesitant to okay her marriage to a Nigerian man.

While admitting that it is hard for parents to let go of their daughters, Ruto joked that it is even tougher when the groom is a Nigerian from the Igbo community.

He said his skepticism was due to his experience with an Igbo man named Anthony Chinedu, who was deported from Kenya in 2013 over drug trafficking allegations. Ruto said Chinedu refused to disembark from a plane in Lagos following his deportation.

“When I first met Alex I told him a story of a guy called Chinedu who gave us a lot of trouble and I was told that man was an Igbo. So you can understand…this Chinedu fellow gave us so much trouble that we deported him to Nigeria and when we deported him he refused to get out of the aeroplane in Lagos for two days. Even after leaving him there, we found him in Kenya," he added, leaving guests in stitches.

The two exchanged marriage vows in an invite-only ceremony held at Ruto’s residence in Karen, Nairobi.

Ezenagu is an Assistant Professor of Taxation and Commercial Law at Hamad Bin Khalifa University in Qatar. He holds a doctorate in International Tax Law from McGill University, Canada, and a Master of Law degree (LL.M) in Commercial Law from the University of Cambridge in the UK.

I would rather Deal with an IGBO than a Yoruba. Yorubas are Insecure people and Full of Themselves. The best they do is Uncontrolably talk or Run their Mouth in Yoruba even around People "they know" don't speak Yoruba. Gossip and Backbiting is their Game; very Educated fools.

Igbos are no different! The only difference is that the Igbo will kill you while you are laughing and sharing a sumptuous meal together!

The feelings of Ruto’s reservations about giving the daughter to t her Igbo is mutually shared by the Igbo people!

The Igbo could not believe their son was marrying a daughter of a pastoralist! They were also concerned that DP Ruto is a known scammer just like them!

I thought the Nigerian bribed his way to Karen!

I thought the Nigerian bribed his way to Karen!

Man passed all background checks and balances. Chinedu returning to Kenya ahead of the plane reminds one of those dogs sold to westerners returning back

So Ruto is aware his daughter June is was married to the scammers of the world? He better lock up all his stolen money in a Shimo in Sugoi where all the stolen cattle graze!

Nigerians are now smelling his compound with a special long nose, and the entire fields of Kenya! God have mercy on all of us!

I hope we don’t wake up one day to find Chinedu being the new president of the republic of kenya! Or worse yet find Kenya already uprooted and planted on Nigerian soil as one of its state next to Enugu or IMO state!

How can we not be nervous about this marriage while Ruto himself (a big known thief of igbo’s measure) is worried about his daughter marrying a another thieving Igbo clan?

I have a bid headache! Does anyone have Panadal to cool my head?

I bet Ruto and the Igbos have found just the right company. Wash wash, cattle rustling, murder,power and greed converge at Karen. I hope the rest of us Kenyans are still safe despite all this.

Ezenagu needs to lose a lot of wait! How is he going to perform being that fat already?

We all hope this marriage lasts a little longer than that of Anarlisa Keroche Muigai!

Kwanza, congratulations is in order. Pili, the DP is looking fly as is the bride! Tatu, me thinks DP's woes have just begun. He better hold on tight to that gravy train his family have been feeding on. Nigerians are generally very... ...patient whilst salivating on the proceeds. Lakini all the best. Maisha is for the living, so live!

DP Ruto’s woes started in 1992 with the YK92 which destroyed a religious man to become the most corrupt man in the world. He is the guy that Moi used to steal the bigger pieces of land for Moi.

Ruto preferred to lose his Heaven soul for earthly treasures!! And yes, Nigerians are very patient birds as they wait for a worthy worm! DP Ruto is an equal with Igbo among the scammers of the world!

After shaking hands with a Nigerian double check to see if you have all the figures....

“Figures” or fingers? I lost 3 fingers after I shook hands with an Igbo man! He took both my big toes as well!

Every time I smell a Nigerian, within or without, I ran...I bolt. Talk of scammers. You will find them there. Talk of dishonesty, opportunists, fraudsters, and know-know." They also, run away from each other. This Chinedu guy has a opportunistic vision. He understand very well when to get in, and when to get out. Very soon he will use Rutos name as conduit to ferry hard drugs or fake gold, fake naira, through a well-orchestrated cartels from Naija. I feel for this innocent daughter of Ruto. Kenyan women blindly go for foreign men, just to raise their ego, purse and self-esteem. I have 3 colleagues from Nigerians and have tried to keep away from them when they were caught by CCTV cameras punching for each. They were summarily fired after 15 years of hard double-double labor.
But lets face it. Kenyans have surpassed Nigerians by far, as eight in every Kenyans you bump into are thieves, have stolen, have scammed, are about to steal, are being groomed to be thieves, have just left jail for thievery intent etc. Only God will help us.

How do you think Ruto knows hChinedu!? Ruto used chinedu to sell hard drugs for him and to mine illegal gold in Congo forest! Do you remember Ruto getting caught hauling gold out of Congo with a helicopter? Ruto is not new to international syndicate scams! He is a major layer in the underworld!

Ruto is deep in the Nigerian scams! He is just hoodwinking people here so you can think he a priest of the holy ghost!