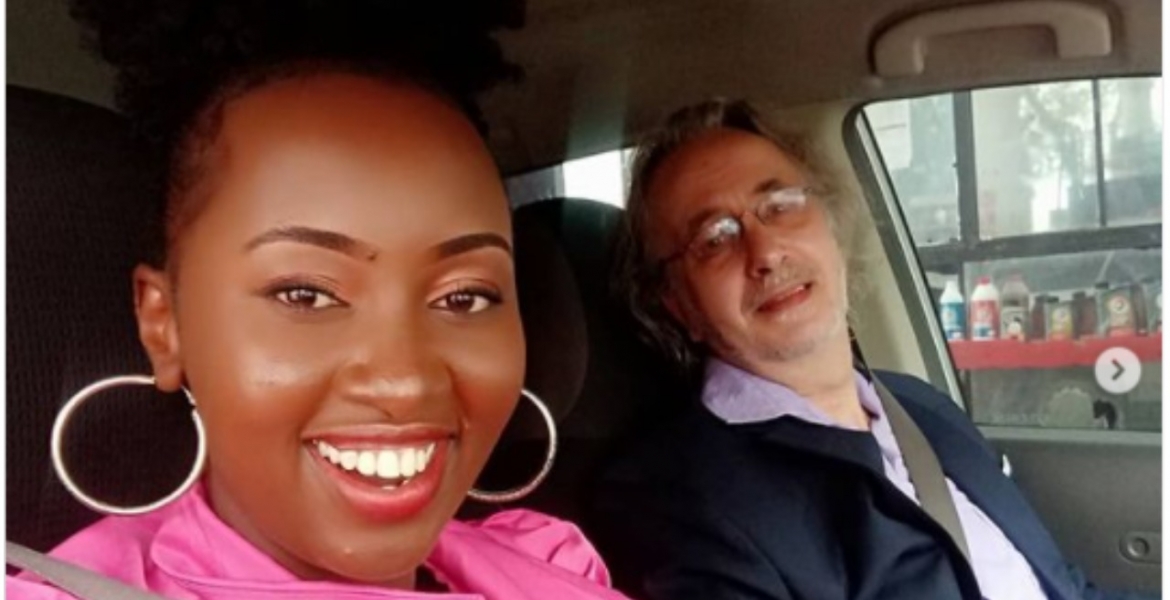 They say love knows no boundaries, and the same goes true in the case of 61-year-old German man Greg Paul Twiss.

Greg sold everything he owned in Germany and moved to Kenya after falling in love with a young Kenyan woman Mary Wanjiru Njuguna, 29.

“I sold everything I had in Germany and came to Kenya because I wanted a family with Mary,” Greg said during a recent couple’s show on NTV.

“We used to talk a lot. We had communicated for long before I decided to move here.”

The German pointed out that stories of Kenyan women swindling foreign nationals in the name of love did not scare him as he was determined to be with Ciru. “It didn’t really matter to me what people would say,” he said.

Wanjiru, who is 32 years younger than her Greg, admitted her husband is older than her dad by three years but the age gap does not bother her.

Greg, a divorcee, was 52 years old while Wanjiru was only 20 when the two met on Facebook.

The couple lives in Nakuru and is blessed with twins who are about to turn eight. Greg had three children from his previous marriage.

Hahahah, what is love?This mystery continues to confound me.Does love really exist,or is it merely the desire to have what you can get from the other person? How come we never hear of a young twenty something falling in love with apoor 65 year old man? How many of his age did the German fellow try to date? Ok I will call it golden love. He who has the gold gets the love.And that's more so when there is a huge disparity in age.
This is no brainer. She is young and pretty,and that's what he is looking for.Not an old wrinkled old woman.And the young beauty is trading her beauty for security.Sound like agood deal to me.
The only thing that concerns me most is that,couldnt this man find ayoung German where he is from.Could it be most dont like old men,rich or poor? Why go that far,in astrange land where you do not know the customs?At your age you should know better.These young Kenya girls are not as innocent as they let you believe.How could take the risk after reading about how they swindle old white men.What make you think you are special and an exception? Hey if you beat the odds, more power to you.

The young Germany women only like black men for whatever reason(s)! And they also don’t discriminate on the basis of age as long as the black dude can breath and perform!

He did not have much of a choice in Germany because women there won’t look at him because he is too white!

So Paul did the right thing to travel to the origin of black women to find a wife!

Wanjiru’s father might be too young to understand how important that is.

As your question about age of the man? African women live real old monied muthungu. She is a kikuyu and therefore money comes before knowing if the dude can perform well in bed! If he has the money, then the lady is very happy indeed! Does not have to be much money!

And back in the village, they will all be whispering that Wanjiru ni arahikirio ni muthungu! The rest is simply history as the villagers see some twana twa Wanjiru ruins njuiri ya kimira. Total colonial mentality still lives on!!

This made me chuckle, especially the villagers part.

I guess the term “villagers” simply means Wanjiru’s youthful old father in particular! He is quite happy to have married his daughter to a “muthungu”!

@Maxiley do not overthink marriage. It is very simple; it is companionship where both bring something to the table. In this case you literally answered yourself and this is what you said

"This is no brainer. She is young and pretty,and that's what he is looking for.Not an old wrinkled old woman.And the young beauty is trading her beauty for security.Sound like agood deal"

There isn't a textbook on marriage cos people are different.

@ mugikuyu, there is this elusive "glue" called love that supposedly sticks couple together.How important is this "glue" as opposed to driving force called MONEY?. Do you think couples become unglued for luck of money on the man's side,and lack of security on the woman's side? See, you can get companionship without all those complications.Please try to replace companionship with relationship,or transaction,and the perceptions and expectations change.But I have learned something from you.Marriage=companionship.Simply put.

@Maxiley it is not about transaction or expectations. It is about friendship. My companion is my best friend. Its that simple.

Let the mzungu old boy have his pretty cake to look at while other Kenya black boys are eating it! I hope it did not end u like other wazungu mpango want kando who are getting killed by Kenyan women on daily basis for material greed! I can do is wish this old Mzungu well girl vacating Germany after selling everything he owned there. That us something a Mzungu should never tell a kikuyu woman in this day and time! He will be put inside a water tank alive to die and be forgotten. Was Cohen not an old man like him? Huyu Mzungu Anacheza na warembo wa Kenya!

Umekwisha mzaee! Kenyans chicks are the best! Wangoso huwa hawaponyoki once they taste the young hot goodies from our ladies.

Hahaha! Once you go black....there's no going back

How about those who go white? So do they ever turn back? Pussy is just pussy you fool!

ROTFL..hehehehehe, you are too funny Rob!

Wow! I’m moving to Germany to marry a 85 year old granny so I can have a good start in life! I just turned 19 years! My Cucu gal lives in Munich! I’m going abroad yo!

@karinga - you gonna sleep (have sex) with an 85 year old white lady for the money! Phweeeuui! Wewe umerogwa!

The kardeshians also spend all their wealth on black brothers! They know where the real juice is - in the black, strong and handsome!!

Mid life crisis. Lady will discover herself in 30s and realise she was short changed. He who has the money takes all the girls.

Every body has a mid life crisis once in a while. I’m having one myself @guest trip Ole seven!

Does this German guy have a daughter in her 20s! Im 67 year old male and I would like to marry Paul’s German daughter so we can have the whole family in Kenya! I’m all set and I’m a farmer with lots of milk cows!

I will teach her how to do good African things like cultivating the shamba with a small panga, cooking Githeri,making terere, ugali na nyama choma, and how to ferment ucuru wa mugagatio.

Money and the girls boy makes life a bitch! Don’t you wish you had the money like this Mzungu to buy some young thing?

Hope I get a visa to leave behind the misery of working in a donkey meat butchery! I’m ready to start all over with my life with a Mzungu chic.

I will use Paul’s example as to the reason I need a visa to travel to germany. Any city will do but I have heard of a city call Berlin! That’s where I want to go! I will even change my name to Von Little Vobec.

@ Mike, I support your"balancing act". I will add my 6 bulls,and my 5 acres just to help you out cause young things have high maintenance cost.And Germany life is not each.

Haki Wanjiru is looking smart!! I’m looking for an old furt too to change my life! I’m 22 and I will take up to 78 years old Mzungu!

Damn @achieng says Wanjiru is looking “smart” and now she wants an old Mzungu to smarten her ass! Surely ujinga ni mingi sana! Get a damn job @achieng to smarten your lazy ass!

I guess getting a Mzungu old honey is appetizing for a country girl from nakuru! The father does not care because all he is seeing is some German money!

Blind love for the gold diggers on for those with mine of gold? Gold diggers have well planned non-love kind of love until the targeted goal is accomplished!

Could their countries be deteriorating? I thought to them we are " shit hole countries".
Or could the history of racism and discrimination be catching up with them in their own countries?
There is always two sides to a story.
Let us keep watching this space.

Happy damn! She is smiling too. He must be doing something right! Down there you know….

Age is just a number, by virtue of the fact that Paul spent some time commutating with Ms Wanjiru, it's imperative that the two got to know each other undoubtedly well, hence his subsequent and perhaps a well thought decision was ultimately arrived at, after all Love can cross natural frontiers!

No age is not just a number. It is more than just a number because Paul will be walking with a cane and may not be able to get it up! He is heading to seventy son. Mechanical parts will start shutting down.

Wanjiru will then start running around looking for real love ( simply meaning looking for a strong dude who can satisfy her sexually!). It happens all the time and this will happen within the next 10 years or earlier!

Tell us what he had, this is no news