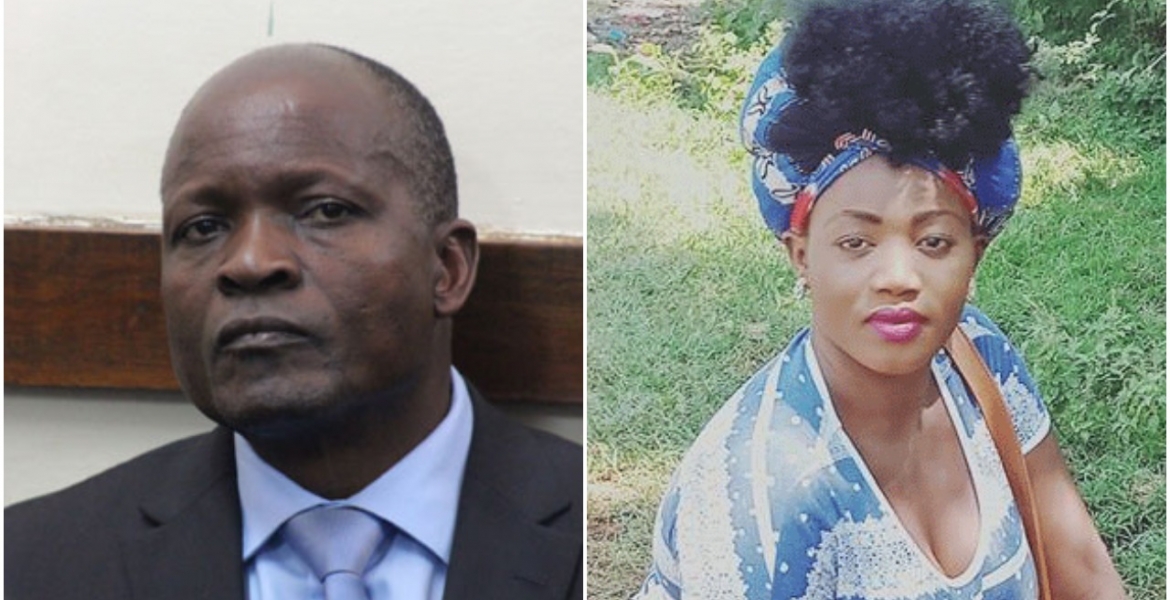 Obado is accused of killing Rongo University student Sharon Otieno and her unborn baby in September 2018.

The trial is scheduled to take place from July 5th to July 15th but Obado, who pleaded not guilty, wants it pushed to a later date citing a spike in COVID-19 cases in the Lake Region.

Through his attorney Kioko Kilukumi, Obado says that he resides in Migori, one of the 13 counties that were recently declared COVID-19 hotspots by the Health Ministry.

“In light of the directions issued by the Ministry of Health for the greater public good and to avoid the quick spread of the Delta variant of COVID-19 to the rest of the country, my client is unable to travel outside the COVID-19 hotspot Zone. Accordingly, we request the case be mentioned virtually on Monday, the 5th July 2021 for the purpose of fixing fresh hearing dates, hopefully at a time when the threat of COVID–19 has substantially subsided,” Kilukumi says in a letter dated June 28th.

The hearing was initially set to commence in March last year but was adjourned after courts scaled down operations over the COVID-10 pandemic.

The prosecution has lined up 37 witnesses against Governor Obado and his co-accused Michael Oyamo and Casper Obiero.

Governor Obado later confessed he in a love affair with Sharon, who was seven months pregnant at the time of her gruesome murder.

A post-mortem examination revealed that Sharon was stabbed eight times, strangled, and raped.

Why come her death was not deferred?

Murderous, corrupt goons and elite thieves in Kenya enjoy unparalleled holiday from our criminal justice system. They are untouchable! Obado brutally murdered, or ordered the same - a university woman together with her unborn child! And yet, almost three years later, Obado is a free man - a governor, busy looting his county. That is the same reason (impunity) why Babu Owino is a free man, more than a year ago after shooting DJ Evolve through the neck with a gun. How many regular Wanjikus are freely walking around in Kenya after committing murders and attempted murders? Because of these inequalities in our justice system, anger, legit and justified anger is slowly building up among the ignored and scorned masses. Soon, we will have no choice but to stage a gallant revolution to save our country from its enemies at home.

How do you want the trial deferred because of COVID but you never deferred killing her governor okoth? You need to be in jail as we speak until the trail is concluded!

Obado killed 2 people ( Sharon and the baby) but now he is afraid of dying of covid19! Had you kept your little stuff in your dirty trousers, you would not have needed to kill a young girl and her baby! Let the trail begin!

Corruption at it's best.
A sitting Governor accused of murder and rape.
First things first..DNA... IF IT'S FOUND THAT THE GOVERNOR RAPED HER...FEED HIM TO THE DOGS.
BUT AS ALL OF US KNOW THEY WILL SWITCH THE DNA TO A PERSON WHO HAD NOTHING TO DO WITH IT.
MA'AM KOOME NEEDS TO DO BETTER.

Mkenya should say something about three American mothers from Juja,Banana and Ndenderu(40m,8m & 10m from Misri,Limuru respectively)sold their newborn babies in last week.He should also explain if the American police are involved in daylight muggers in Nairobi and killings in most parts of Haven Kenya in the recent past.

@Morris Menye Are you that obsessed with that Mkenya guy that you have to mention him on every article published on here? Dude, it’s like you wanna get his D!! Hehe. Anyway comment on what really matters or go get laid soon.

Okoth is an indirect. Killer. He may not have held the knife in the murder but he ought to have known it would happen in his bloody circles. Death penalty needs to be quick in Kenya. May Sharon Rest In Peace. Okoth can screw himself.

Just keep hiding in politics you killer! Moi was here it he is now gone and his family is paying. Zuma is in jail! Good examples to let you know justice will be delivered some day unless you die soon from covid19. Na now a killer has said he wants to be president. Do presidents look like you ugly murderous face?

This worse than murderer man should not be practicing . He should be Jail . In the course of time he has bribed all the way so sharon life has been turned to nothing. Shame to our system . Last week the uk minister of health had to resign after being caught kissing a woman in his office ( cheating on his wife and disobeying the covid laws by kissing But Obado continues as if he killed a fly . In kenya a common man life has no worth what a system we have. when will we citizens change the system . only us can change. french revolution was based on less evil. No elected member will want change on us by going to the street and demanding change without using violence by refusing BBI

This guy killed the woman but now he does not want her people to get justice by getting the courts to hang him.

Only in Kenya can a politician charged with double murder could enjoy being governor without interruption.Not only that, this fellow was also charged with embezzlement .Wakenya wenzangu, is this the Kenya we want? Where the so called people "highups" can commit crime with impunity. Who speaks for the masses then?

That's why need a REVOLUTION.
It has started in Swaziland.
Kenyans need to get sick of being sick and tired.

Kenya has to be on top of the shit hole countries. Politicians maim and kills in broad daylight and get away with it. This monster of a man killed his side chick and the unborn baby. Somehow he managed to go back to his job as if nothing really happened. Why should Kenyans tolerate this kind of bullshit???? This is a criminal! A killer!!! He should be treated as such. Is this monster's life more important than the two lives he extinguished?????? I don't think so. Why do Kenyans allow this bullshit???? A life is a life. He should stand in front of a judge tomorrow. An eye for an eye. Stop the bullshit!!!!!!!!!

Abado is very guilty of Sharon’s murder! Even a dummy can arrive at that judgment. He will have to pay back in the near future regardless of whatever tactics he want to use to delay the punishment of his crimes

WHAT ABOUT KABOGO?? ETC...
WHEN ARE WE GOING TO SEE JUSTICE SERVED??