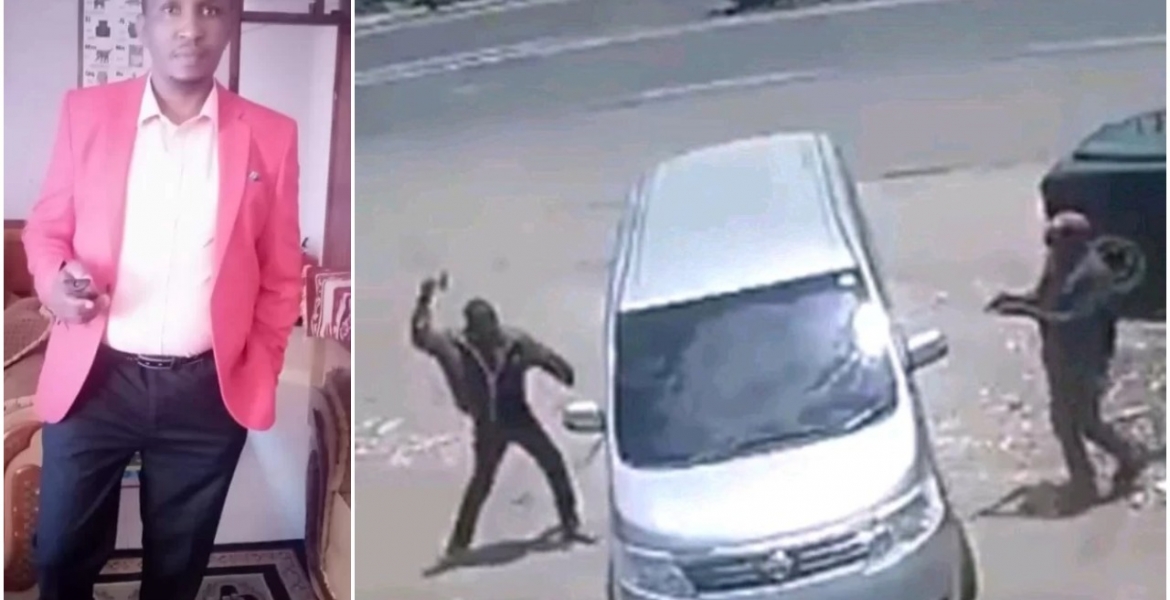 Police in Nyeri are pursuing a gang that kidnapped businessman Gerald Guandaru on Tuesday evening.

Guandaru, who owns an entertainment joint and a barbershop in Nyeri town, was forcefully picked by unknown men at around 5:30 pm as his employees and bystanders watched helplessly.

Reports indicate the 45-year-old father of three had parked his Toyota Premio outside Joans Bar and Hotel when four men donned in facemasks arrived in a Subaru Outback.

When Guandaru arrived, two of the men came out and went to his car, demanding him to open the door. They then dragged him out of the vehicle and bundled him into the Subaru before driving off towards Nyeri-Nairobi highway.

“When we saw the type of vehicle the men were driving, we suspected they were police officers, and that they were arresting the businessman for reasons well known to them,” a witness said.

Guandaru’s wife Cecilia Wamaitha filed a report at Nyeri Central Police, saying her husband had been receiving strange calls from a private number since Monday.

Police have since obtained CCTV footage from the nearby buildings to help in investigations. The registration number for the Subaru Outback was caught on one of the tapes.

“We couldn’t immediately identify the men because their faces were covered in masks. We hope the vehicle’s registration plate number would help us unravel who the suspects are,” Nyeri County Police Commander Adiel Nyange said.

You should never allow anyone outside your moving car to get out of that vehicle! The first thing you do is to exercise military type tactic driving by creating chaos with a full intent to kill the hijackers.

As a matter of fact the guy on the right side was the easiest to kill on spot! I would have killed him first and then hassle down the idiot on the left.

Thugs trapped me in Naivasha area in an attempt to hijack my Parado. They had crude weapons including guns. The guy with the gun was the first one to knock down, and I hope he died.

The guys with the pangas damaged my vehicle but they all bled before they run away! Never ever panic in such a situation. You main goal is to survive the ordeal. A car is a weapon worse than any other if properly used! Gerald had a lot of opportunistic to kill both thugs! Unfortunately he panicked and no body can trace him now.

I can assure you the guys who trapped me will never try with me again because of what I did to them that memorable night! I save lives inside the my suv safe a few dents on my vehicle!

Attitude and skills are usually key to survival in situations like these. Active Self protection (asp) training is key in this era and age. Having some form of weapon and paper sprays could have altered the equation in favor of the victim. Don't be fooled, these idiots aren't looking for a fight, they are look for easy prey. If you put up a spirited fight even for only 30 seconds, chances are that you will carry the day.

I would rather die fighting for my life than allow anyone to capture me! I agree with both of you above! It has come to a point when everyone had to fight to live! We also need to fight the cops because they have not done anything to stop the kidnapping! Fight back even if a cop stops you because you don’t even know who is a cop or a thug these days! And remember the cops have become thugs too! I’m now carrying a very sharp huge panga in my car and I will use it to defend my life without any hesitation! I’m done waiting for men to fight me for me any longer!

Hopefully Gerald Guandaru will be rescued.
Him and my brother went to school together. But my brother disappeared over 10 years ago without trace.
These kidnappings have to stop.
DCI NEEDS TO DO A BETTER JOB.

The Kenyan public need to be up in arms through mob justice and kill all the thugs attacking them! If the dci complains, mob justice him as well so he can start cleaning the streets! That is the only way Kenya will get better! Nigerians conduct mob justice on every criminal and life there has settled down a bit! The only bad thing is that all the Nigerian criminals have now migrated to Kenya because they know we don’t use car tires around their neck to burn them! We just need to unite and take ruthless methods to stop criminals.

How did your brother disappear 10 years ago and you did not do anything to trace him? @little frog, could you be telling a lie here?

My family did all they could at the time.
Media, and all.
Why would I be lying when my mum cries every day? It's painful,BUT you learn how to live with it.

Sorry man! Why are there so many people getting kidnapped lately and no one is really doing anything? This is quite strange and bothersome.

@ Kora Kanini, its unfortunate that when you read this kind of inhuman treatment of others, it rings close to home for you.Now days anybody can be victim of a vicious crime in Nairobi.Or should I say in the whole Kenya.
We as a society have become soft on crime.It's almost like we are afraid to take action. We are timid. And this emboldens the bad guys.
When we suggest solutions that could really reduce crime,we are impeded by slow wheels of justice, self proclaimed moralists,religious fanatics, the WEST ideology,and corrupt judicial system.But we allow this.We cannot blame wazungu on this,and we cannot not seek solutions from them.
Yes,I believe,in democracy,and the system of due process. To be treated humanely is a human right. But there are some incidences where that is a waste of time.For example, you catch athief in the action of committing acrime,we need instant justice. When we catch a rapist, remove his offending organs.When we catch kidnappers, put them in jail for life.When one enriches himself or herself through corruption,and make more than 10m shillings in profit,lock them up for 15 years,and confiscate their ill gotten riches. Iam sure we have people here who could come up with more and better ideas that would produce positive results.When are we going to take effective action?When one out of4 business men is kidnapped?We better nip this menace in the bud right now. My two cents.

Comrade Maxiley... I totally agree with you. But how do you deal with deep ROOTED corruption that started in the 60s?
REVOLUTION will be key to removing these murderers and GOONS from power.
Then set Martial law or do what MAGUFULI did in Tanzania or what Museveni did in Uganda after they took power.
But go a step further and do what the crown prince of Saudia did.
I have said it before Kenyans need to be sick of being sick and tired.
My 2 cent.

@ Comrade Kora Kanini, election date has been set. We pretty much know who the candidates are,or will be. We also know which" devil we know" is the worst amongst the lot.
You mention corruption.Aterrible vice.If the electorial system is so corrupt that we cannot have fair elections,then why even bother to vote?
Some times I wonder if we are ready for democracy? Or should I say mature enough...
We know the Kenya we want. So those who impede the process toward the kenya we want should be removed,by all means necessary.

Halisi explain how US police adapted Guandaru some 105 miles from Misri,Limuru,Haven Kenya.

I guess he panicked after seeing the gun.

This is fake news, the photo above of the two men hijacking the car is from a different incident that occurred somewhere in Nairobi. The car isn't even a premio for heaven's sake.

This is fake news, the photo above of the two men hijacking the car is from a different incident that occurred somewhere in Nairobi. The car isn't even a premio for heaven's sake.

If you are going by the picture alone,then that's not enough proof of "fake news". How about the story without the picture...?

The reason why I suspect such because the guys did not want to steal anything.

If they wanted his money or property they would have taken and left.

Not necessarily so...what about ransom seekers..that's what has being going on, if you haven't been in the news lately...

These two thieves (police officers) are well known regardless the fact that they are hooded. People just need to confront them and just mob justice both of them! That is the only way to stop this madness!