Strugglers Movement Diaspora Chapter Launched in the US 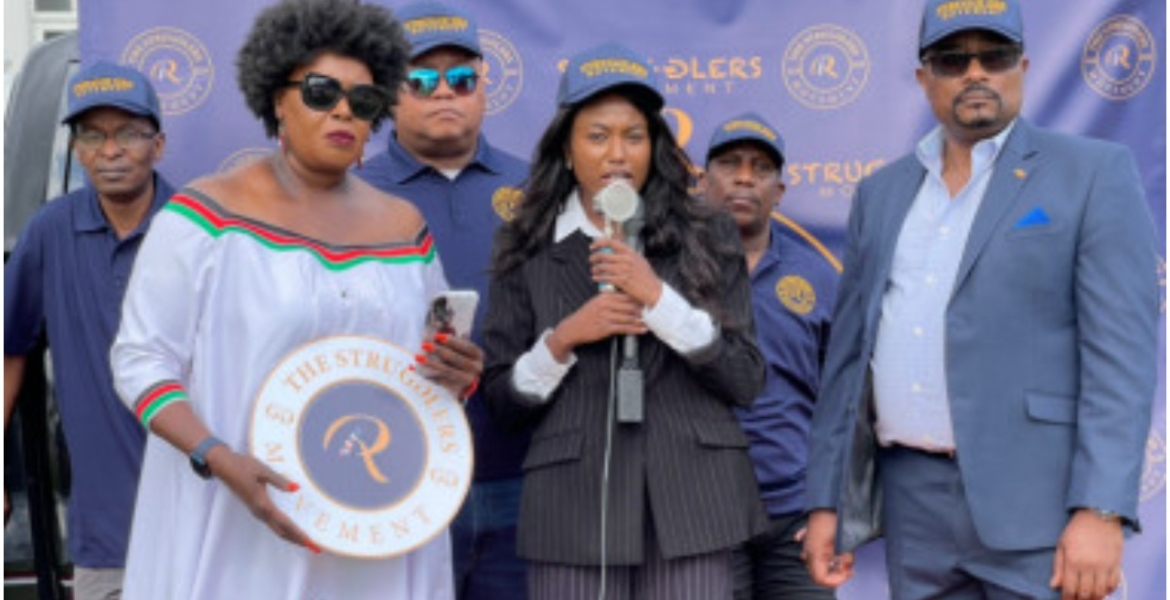 A diaspora chapter of the Strugglers Movement, which was launched in Kenya last month, has been unveiled in the US.

The chapter said it will organize countrywide civic engagement activities to sensitize the youth and Kenyans on the need to make the right decisions while voting.

Speaking during the official launch of the diaspora chapter in Dallas, Texas, Dr. Wang’ondu condemned the violence that erupted at Deputy President William Ruto’s rally in Kondele, Kisumu County on Wednesday.

“We would like to condemn the violence that happened in Kisumu, we promote peace. We, as the Strugglers Movement in diaspora, are looking to for civic engagement and support for our youth,” she said.

“We would like, going forward, to be counted, and we would like this movement to support the best candidate that will address issues of our youth. We seek to promote systematic change that can be sustainable to last through the decades.”

The Struggler’s Movement seeks to provide an alternative to Ruto’s hustler narrative, which they described as “conniving, violent and deceitful.”

“Strugglers Movement is a conglomeration of national leaders from sectors of diverse political affiliations and social standings in Kenya. It converges in pursuit of a more promising future especially for the younger generation the lowly placed in the society."

"It provides a national platform to engage the political leadership and their stakeholders on better systems of governance which will eventually augment and progressively extinguish Kenyans daily struggles,” the movement said in a press statement.

Nonsense! You are all for SHOW. Helowwww..
Your grand mum use stones, sticks e.t.c as buttwipes?

Strugglers movement??? Couldn’t they come up with a better name? The struggle is real but not that bad.

I thought so! its actually repulsive... sorry!

I am also intending to launch a Status Quo Movement for Diasporains in the next two weeks in Dallas. Those who want to join the movement are welcome. The movement recognizes Kenya's dynamics and forward achievement since the country's indepent front from England and want to maintain that Status Quo. We don't want to make Kenya a country of huslers, strugglers or beggers, we want make Kenya continue to the best country in Africa. Kenya has the largest billioneres in but we want to make number one. To hell with hustlers and strugglers. They are lazy, are not smart and only know how to wean like babies. I am a billiore myself and I will never support lazyass losers!!!!!!

Well stated @yusuf, Yes, set it up, ready to join! Tired of this falsely concocted narrative of negativity, despair, and sorrowful mindsets, making Kenya a ‘crying’ nation while they have all and everything to stand tall and be proud of all her achievements! This has to stop!!! Time to celebrate success and lift up those who want to be ‘lifted’.

“Licensed” murderers,violent robbers,conmen,drug dealers,corrupt gangsters etc cannot be described as billionaires.The current crop of evil billionaires should be PUT TO DEATH so we start another chapter.

Count me in Yusuf am tiered of struggling.

Kicks of dying horse or donkey which ever. RAO and Ruto are the wrong candidates for the Kenya we want

If u like success then quit using poverty names. Raila no longer creative like before. Copaste
Buy more crypto

Strugglers my foot .Most look like they have had too much too eat and are struggling with weight and not money.Why should you be elected if you are struggling now implies once you get to statehouse you will not struggle because you will be stealing.Politics in Kenya is a big joke

funny how all are light skin.
should we just call it lightskin movement?

Wa'ngondu means " one one who is as dumb as a sheep/goat".Kindly Ignore this fool who is struggling mentally . Her hope like her predecessor Ochuodho is looking for some Gov appointment someday. Madam continue studying goatology. We ain't no fools.

Wow! Kenyans! Think beyond Ruto and Raila. We have other better candidates..untainted, and have Kenya at heart.

Who and where are they?

Go ahead we support Baba in Kenya, he is a true freedom fighter no a thief

Kenyans have a very bad habit all over the globe! This full Dr is using cursed words (strugglers movement) to start some stupid stuff! Are these the only word this PhD holder knows! Stupidity of the highest order!

Some Kenyans give us a bad name all around. The rate of begarliness is beyond remedy. No sense of Dignity.