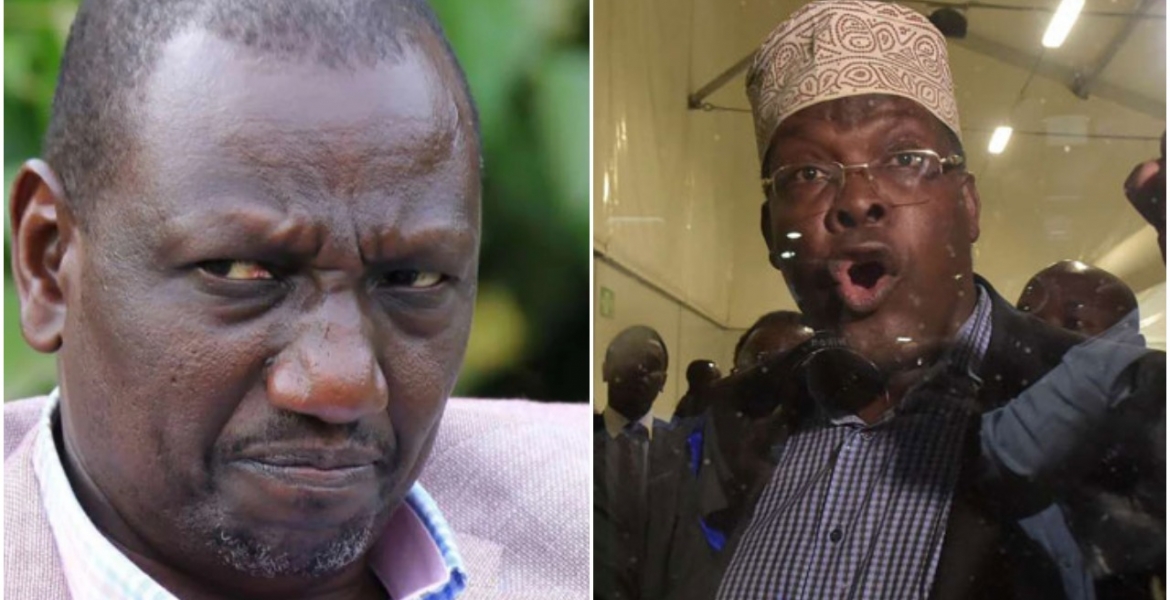 Deported Kenyan-Canadian lawyer Miguna Miguna has distanced himself from any links to Deputy President William Ruto.

Miguna, through a series of tweets, categorically stated that he has never had any relationship with DP Ruto and blamed the rumors on people working for President Kenyatta and ODM leader Raila Odinga.

“For hypnotic zombies, my message is this: There has never been any link, connection, or relationship between me and @WilliamsRuto,” he noted.

He added: “The #coronacoalition new punching bag @WilliamsRuto has BLOCKED me on @Twitter since 2017 during my BLISTERING CAMPAIGN against all the Kenyan despots and conmen.”

Miguna further accused Uhuru and Raila of blocking him on Twitter, adding that the reason why they forcefully removed him from the country was that they feared him.

“I don't miss their empty Tweets. Their messages add no value to the lives of Kenyans. In fact, they are EMBODIMENTS of the culture of impunity,” added Miguna.

Miguna was first deported in February 2018 days after his arrest over his role in the mock swearing-in of Odinga on January 30th, 2018. The immigration department later said that Miguna was in Kenya illegally as he had renounced his Kenyan citizenship when he acquired a Canadian passport.

The following month, he attempted to return to the country but was banished after spending several hours at the Jomo Kenyatta International Airport (JKIA) detention facility.

Miguna’s trip back to Kenya in January this year was aborted midway after the government issued a red alert barring all airlines from flying him to the country or any other African nation.

After getting stuck in Europe for a week due to the embargo, Miguna was forced to return back to Canada.

Miguna Miguna - I’m not sure how a man of your caliber ends up associating the the losers all the time! You can deny your warming relationship with Ruto but it will not change the facts on the ground!

Make sure you bring our Kenei back to life as you hang around DP Ruto. You surely are in need of 🩸 blood money, and you are willing to get it from any tainted source.

Money earned through corrupt means will just deepen your curse! Stop worrying about growing old poor and think of a good legacy you can leave behind for your beautiful girls! Associating with DP Ruto will ruin everything you have so hard worked for all your life!

You certainly ought to be ashamed of yourself Miguna!

DP Ruto is not a loser. He is the one who made the drinker chief win elections. And twice! And now you think he is really used enough? Wait . Wait.

We are very ready waiting for Ruto to raise his ugly looking head!! He is not a force to recon with. Just an opportune thief of our coffers! You are the enemy of the people of Kenya if you cannot fess that Ruto has stolen from every body! I have nothing to wait for. Tell him to bring it on! We will impeach the dummy!!

Miguna, the current digital communication is smarter than your big mouth! The high technology equipment track communication world wide at the flip of a small switch! And nowadays, everything is automatic you dummy!!

It is your prerogative to communicate with a thief; probably hoping to inherit some under the table scrums of corruption! Poverty is not a good friend because it makes honorable folks engage in many unconventional means!!

Stop denying what can easily be proven! You have been in communication with Ruto severally! It is a known fact no matter which way you try to deny the deep red blood on your big lips! Beat it dude!!

Talk of poverty as if the rest of Kenyans( except Miguna) are rich? You are misplaced. When one talks with hate, that’s the kind of derivative one arrives at.
Corruption in Kenya had its chief patron. The president.
It does appear that some tribalists, you included,cannot see beyond your stinky a**!

Miguna Miguna, Since you are now dining with Ruto, can you tell who killed Mwikali, DP Ruto’s wife steward?

Please remember the girl, Mwikali, was only 27 years, much younger than Kenei. Their lives can not be lost in vain!

The world is very anxious to get the truth how her mutilated body ended up in Tsavo National Park, the same place Yebei was found dead!

First talk about Msando. I have just picked one person for your case study for now!

Miguna is just trying to use the weakest link to return back to Kenya! He will jump on any shady toad to find his way back. And he will take some corruption money while being carried by a sick toad.

He knows Raila’s train has already left the station and he can never be welcome in it based on his insults to Raila! It is a do or die for Miguna!!

There should not be no other weaker or stronger links to make Miguna go back to his homeland. His birthright is the legitimate link that he is Kenyan and thus remains Kenyan? Period.

I don't think MM has Ruto links. Me thinks he's just driving a wedge up against a group of politicians who he despises. And he has a reason to.

I don't think that Miguna has any Values or Beliefs. He only believes in himself, and coveats any attention given to him. He was Raila's spokesman and political advisor because the position gave him class and visibility. He did not care about Raila, or his values. When they fell out with Raila, he was quick to Insult and throw mud at his former boss, again because this would give him publicity, and everything is always about him.

Miguna cannot bear staying out of the Headlines. His ego cannot allow it. He is just dragging in Ruto's name to make his way back into the News, with claims that even he himself does not even care if they are true or not. He achieves his purpose, when his 'Claims' make it to the Headlines.

The two are regularly talking! They both like to enjoy some imagined attention and popularity! They will both go down together like birds of the same feather flock together! And they will still be helplessly kicking while down there.

The problem with Miguna is the simple fact that he never realizes when he is being used or dumped! His nature is fight everything stupidly, including the free air he breaths!