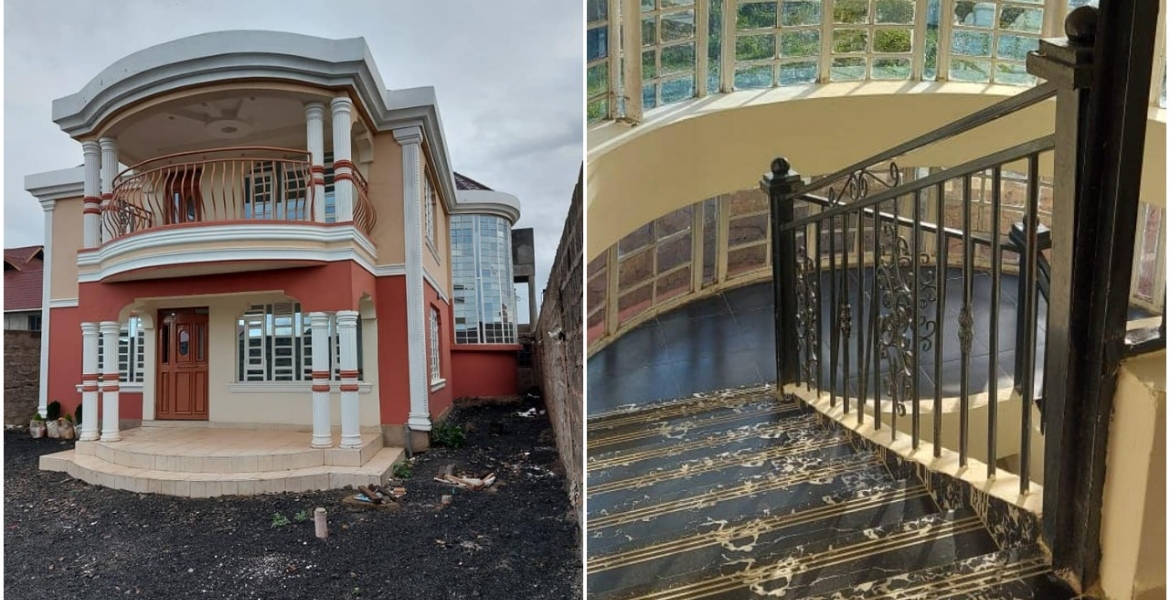 A US-based Kenyan pastor has reportedly donated her multi-million-shilling mansion in Thika to be used as a prayer centre.

Pastor Naomi Mwaniki of Boston, Massachusetts allegedly asked residents of Thika’s Salama Estate to use the double-storey house as a chapel, according to gospel musician Karangu Muraya.

“I can’t recall how much the house cost but it is quite expensive and it took a few years to build,” Muraya told a local news outlet.

Muraya is the custodian and caretaker of the chapel called Mount Zion Prayer Centre.

“She [Pastor Naomi) recently moved into the area, bought land, and settled near us,” he added.

The mansion has several rooms, including fully-furnished bedrooms and a kitchen.

Through his social media pages, Muraya said the prayer house will officially be launched on May 15th.

“You ask why some people are so blessed. Imagine building a beautiful home like this. And for your love in the body of Christ, you make it a prayer centre. This is what Naomi Mwaniki has done for us and Kenyans at large. Let’s meet here as we launch it and dedicate it to God,” he wrote.

And then she will write it off as a donation for 2021 tax year and get a hefty refund from IRS - there I have fixed the missing sentence.

Hehehe. You mean fox has more than one exit hole?

Exactly. And as a Mwaniki (a Bee keeper), there has to be Honey in this Hive; in this Building. The Bees (the Conegants or the Donors in US) make the Honey. And the Queen takes the Credit.

I think there is nothing Absolutely free here. There must be a Catch. For there is no FREE lunch in America (to Kenya).

Those who know God, Know that everything under the sun is Vanity. It only makes sense to Give it back to God, and more blessings come your way. God bless this woman.

Pesa ya watumishi.Is she being audited and needs to come up with actual assets or is she a “female messiah” .Surely no one will ask about donations towards a church even though the source of funds appears suspect

Did she give the title deed to the church.? if not it is called she leased it out for free. but not donated.

Actually, that is a very good question to ask about the bearer of the title deed?

This was a good act which is against the norms. Usually, pastors should be on receiving side; not on donation end. A good example is prophet Elijah who was fed freely. Pope on the other side is sponsored by the church to preach the gospel. Secondly, Pastor Naomi could have received more blessings if she gave this house to homeless community. In Kenya today, churches are for business and this won't be an exception.

The reason one should give and not broadcast globally especially to a noble cause like this one.

Vanessa i am worried of her missing out the blessings by broadcasting. Peoples applause might be all she gets. Ministry is a learning as we go

Then give your house away to a good course and just keep quiet! Don’t be judgmental of others intentions!

Whether he will claims on the irs is nothing here or there.Opra/bill gates do it all the time after giving back to the community so it’s not illegal.The question is what have or me donated before.So tuwache mafeelings na chuki when somebody is doing a good job.

Mafeelings is the current way of life with most Kenyans, especially the lot living in the diaspora! Wao wako na deep seated mafeelings ya wivu! Don’t know why but it is real!

So is that why Kenyans at home constantly try to separate us from our money or property? I think you might have it a little twisted. As for Halisi, alifukuzwa nchini ya Amerika na tangu wakati huo, ameendelea kusema uwongo juu ya uhamisho yake. Amejawa na wivu na ghadhabu kuelekea watu wa diaspora or to use his language watu wa majuu. Take anything he says regarding diaspora based Kenyans with a kilo of salt.

Don't we have enough places of worship/prayer in Kenya?? I am not against places of worship....that said, when are we going to expend the same energy in job creation along with investing in the afterlife?

Hey, is the female bishop married? I am looking for a good old kikuyu girl who knows how to give freely! I’m ready to receive in plenty!

@mundumugo stick on the topic bana.It’s true diaspora guys r confused lots.They hate to see positive things happening here in kenya.My bratha I left usa voluntarily n I can come anytime I want.My hse is still there in Newjersey.Thou am scared of getting covid in states juu imejaa huko ningekunja this year.

&muho said Trump kicked you out of America and that is the reason you are bitter! True or false?

@mugo said Trump kicked you out of America and that is the reason you are bitter! True or false?

Tell us where the money to build came from and show us the title then we can talk. Pana utapeli hapo amini usiamini