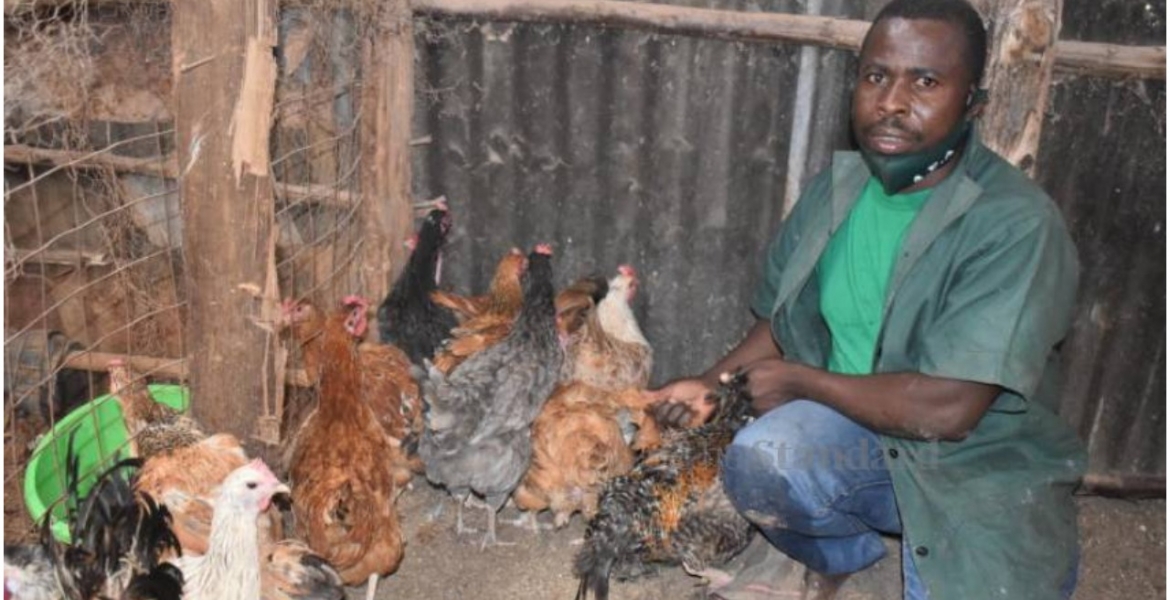 Jacktone Ambole has found success in farming in Kenya after quitting a well-paying job in the US.

Ambole, 29, moved to the US in 2014 to further his studies after securing a scholarship, having graduated with a bachelor’s degree in Public Health from Moi University.

After completing his studies, he secured a good job with a non-profit in the US, where he worked for some years before deciding to return to Kenya to do full-time farming.

Before he started farming, he decided to try his luck in politics by running for the Mwibona Ward MCA seat in the 2017 elections but he lost despite spending millions of shillings in the campaigns, which left him almost bankrupt.

“My prime goal when coming back was to venture into farming full-time, but when an opportunity in politics presented itself, being a risk-taker, I decided to try my luck,” he told The Standard.

“I had used up almost 90 percent of my savings that I had accumulated from the Diaspora for campaigns. That was a big blow. I was in a tight fix.”

While still pondering his next move in 2018, Ambole met one Peter Ndeche, a poultry farmer from Siaya who trains farmers on commercial poultry farming. After attending training, he decided to venture into poultry farming, spending Sh20,000 to buy chicks, feeds and set up the structures.

“I bought 50 two-week-old improved Kienyeji chicks at Sh120 each. After three months, through my networks, I learned about a wedding in the village and got the tender to supply 100 birds for the ceremony. I sold my 50 birds at Sh450 each and got Sh22,500. I sourced for another 50 birds from a friend at Sh350 and sold them at Sh450 each making a profit of Sh5,000,” recounts Ambole.

Every time he sold chicken, he would pump the proceeds back into the business, which enabled him to buy 500 day-old chicks at Sh100 each as well as some feeds.

“I used to sell my chicken when they had attained the age of between two and four months. Those that were two months were going for Sh300, two and half months at Sh350, three months at Sh450, and four months at Sh700. My main market was the locals and events like weddings, funerals, and birthday parties,” says Ambole.

By the end of 2018, Ambole had saved enough money to acquire an incubator with a hatching capacity of 528 eggs and a generator for backup power. He also decided to keep chicken for eggs in addition to meat.

“To widen my network, I formed several community self-help groups and gave each one of the 100 day-old chicks after I had trained them on best practices. The groups did well and today, they are serious poultry farmers. In fact, I buy all their eggs and hatch them. This is why I am able to sell chicks throughout at my farm.”

Through earnings from the business, he was able to acquire a two-acre parcel of land within Ebukuya village where he plants tissue culture bananas, kales, black nightshade, and beans.

“I use the poultry wastes as fertilizer on my farm. At any given time I am selling something on my farm and I have never been broke again. I sell the bananas for between Sh700 and Sh1,500 since they are very big,” he says.

He recently started keeping rabbits and rears various breeds such as California White, Flemish Giant, American Chinchilla, and New Zealand white. He sells a month-old-rabbit for Sh300 while two-month and above go at between Sh350 and Sh500.

Ambole also slaughters the rabbits and sells a kilo of raw meat at Sh300 and fried at Sh450.

“I do not regret leaving the US to do farming. Though I used to get paid well, what I am getting is enough for me and my family and I have peace of mind. I am self-sufficient and I thank God for blessing the work of my hands,” says Ambole.

Currently, he has 1,700 birds at the farm, 215 rabbits, 15 pigs, three dairy cows, and two and a half acres under bananas and passion fruits.

Hey good move but guess what thieves might come one day and finish your wealth that is the story of Kenya. Wealth maybe short-lived.

All of us have a story.
We can give it RAW or spice it up a little.
CONGRATULATIONS my brother on your success.

Great story Mr. Ambole. hard work always pays.As for leaving lucrative well paying job in USA, that's relative.USA is not Kenya.Life style there is based on the economy,just like in Kenya.Yes, I know some Kenyans in diaspora,look at the exchange rate and thumb themselves on the chest at how much they make,forgetting that they are not "Americans". It pays to approach opportunity with humility.
I like your attitude Mr. Ambole.So long as you are making enough to meet your needs, you are happy.Great. After all we shall leave all these earthly materials,why "kill" ourselves pursueing them? I guess to each his own...

@Kaswede I was in usa 2007/08 n I lost 3 houses when the economy got messed up so I can loose yr fortune anywhere anytime in this world but let’s assume the guy chicks get stollen,he owns the land my fred.While in dispose the economy crumbles u loose yr hse ur messed up coz u don’t own any shit??This is a good story for a returnee from the modern slavery western world n everybody should feel encouraged.Personally I have over 3000 chicks which lay eggs m I sell more than 40 crates n remember it’s kienjenji chickens n each tray goes for 400ksh??Good job mr farmer n kograts.Next time u ran for politics only spend less otherwise if u go there to bribe voters high chances they will eat yr money then disappear especially if u are coming from majuu they don’t give shit.They will eat yr monies then tell you umekuwa majuu hio musks yote haujui mashida yenye tunapitia.

I know the moral of this story is to encourage others, but there are several holes. What exactly was he doing in the USA (what is this well paying job-how much was the pay?). He is a smart guy to have graduated from Moi at 22!
What was the graduate degree in and from where? Was it earned in 1 or 2 years (went to US in 2014 and 2017 was in Kenya running for office (MCA) where he invested millions!

I was actually scrolling downwards in the comments section just to find out if anyone noticed the missing gaps. They can fool some people sometimes but they can't fool all the people all the time.

To each his own. We spend most of our lives chasing vanity.

That chicken business also sounds like a low capital business. But it's all good.

@wacha upuzi, maybe he came to U.S in 2014,invested in Bitcoins, Dogecoin, cashed out in 2017,and was in Kenya in no time to pursue a political seat. How's that? It's the land of opportunities.

If you know anything about Dogecoin ( I'm sure you just learnt about it because Elon mentioned it) dogecoin just appreciated the other day and bitcoin less than an year ago, so your premise is null and void!

Bulshit! Bitcoin hit a high of $20,000 on December 17 2017.I knew about Bitcoin in 2011.For Dogecoin, I heard about it before Elon Musk talked about it. I read The Wall Street Journal every day. You, just continue beating doubles and following Will Smith and NE Patriots.

I knew mining bitcoin way before 2017 dude and no it was not that high in returns, prove it!and who reads Wall Street Journal in this decade to sound financial savvy - you just sound so ignorant and so archaic mentioning Wall Street Journal in 2021 . If you mentioned Bloomberg or other current financial analyst journals I would say you know the fuck you are talking about. So do you also know how to kine bitcoin while we are at it 😉

I'm actually retired at a very tender age dude lol, (sipping my rose contemplating my next vacation in a week) shallow comment that someone must be manually employed only peasants thinks that way.