"Your Ambition is Not Worth Your Life": US-Based Kenyan Preacher Warns Deputy President Ruto 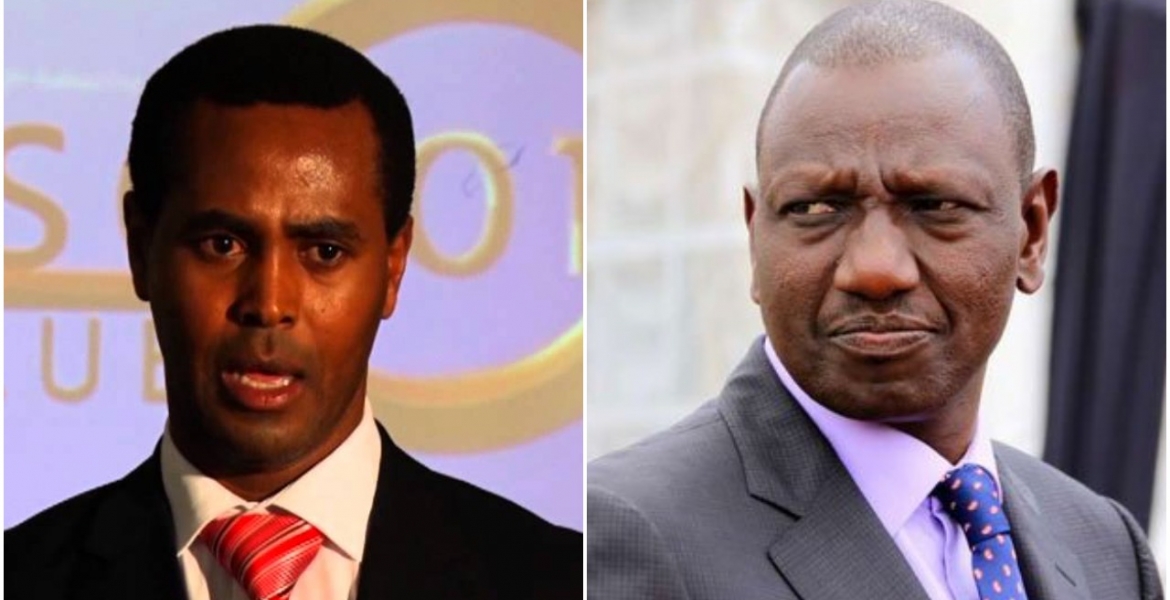 In an open letter on Saturday, Kinyanjui warned that the deputy president has dangerously stretched his heart and needs to relax to avoid a heart attack.

“Listening to you in the last couple of weeks, your heart is very heavy. Please relax. What are you lacking? Your ambition is not worth your life. You’ve dangerously stretched your heart. I know it. I suffered heart failure last year. Slow down my brother,” he wrote.

Kinyanjui, who is also an author and motivational speaker, further told Ruto that “the race to State House is not a life and death affair.”

Noting that promotion comes from God, he advised Ruto to pursue his dreams with moderation.

“Rachel and your kids need you. Kenya will be there long after you and I are gone. No matter our strategies and hard-work, promotion comes from God (Psalm 75:6-7).”

“Neither Uhuru nor Kibaki worked half as you do for the presidency. And none of these two presidents have sacrificed half of what Raila Odinga and Kenneth Matiba have suffered. We plan but God’s purposes prevail over our plans (Proverbs 19:21),” he said.

“I’m praying for God to keep you in perfect health and peace. Just do what you must. Don’t kill yourself to prove a point to your competitors. It’s never that serious. While you’re compromising what matters the most - your health and family - to be the next Commander in Chief, most of your countrymen and women are praying for the basics of life,” Kinyanjui added.

We have heard you Dr.Ng'ang'a...God prevails.The problem is that we never know what God's plan is do we? I hear that he works in mysterious ways.He could even elect you to be the next president...
Anyway, as a learned man of the cloth, I would urge your to come to Kenya and have atalk with your fellow preachers .Most seem to have lost the way.Their main goal seems to be pursuit of material wealth,debauchery,and obfuscating .At the rate they are going,in afew years they will be worse than our politicians. Do we need divine intervention or what?And is there any way of knowing if all this is part of God's plan.Just like he had a plan for Job.Enlighten us please.

Very good advice from the man of God.

Tha(Mercy) Ostrich(Nyaga) is also a daughter of God.But I wonder whether Ng’ang’a Is a qualified doctor or was school mate of conmen “dr” Mugo wa Wairimu,”eng” Raila,Sonko,”dr” Gakuyo,”dr”Wanjiru,Joho,Waititu,Ngilu etc.

Good advice mr preacher preaching about white Jesus but u could have addressed other presidential contenders too who we see doing politicking for presidency.Mr preacher man preach the bible n let the politicians practice politics unless u want to drop preaching u join politics.

Is Ruto not taking the monopoly of lying in church where he goes to donate stolen money? Ruto thinks he is hillier than Thou and he is fully entitled to lie to the faithful about bottom-down economic theories which have failed world over!

He is even insulting Raila when he goes to church! Ruto is just running for presidency to protect himself from all the evils he has done since 1992!

The preacher man should have told Ruto that he is not a worthy presidential material because he is a thief! Also the preacher man forgot to ask Ruto to repent for killing women and children in the Kiambaa church in Eldoret in 2008! Man if God please tell Ruto not to kill Gicheru so we can get to the bottom of everything Ruto did in 2008 massacre!

Oh and by the way, the man of God should have told Ruto to stop sponsoring bandits in Laikipia to evict Kikuyus from their land by killing them and burning their homes!

Ruto will bring Kenya to it’s knees should he be elected the next president of Kenya! He will steal everything worse than the Kimwerer and Arrow dams 21 billion shillings he stole! Man of clothes please tell Ruto we don’t need a thief for president!

I don't think politicians work as hard as doctors, nurses, police/military on frontlines and others who take care of people. Politicians do not have a schedule or a boss breathing heavy on their neck. DP can relax and let God's will happen. Man makes many plans but God's will comes to pass

Ruto is busy planning where to steal and when to kill! Do you need any examples of either of the two events?? The past sins are what is gnawing Ruto’s heart! That is exactly what the pastor is talking about in Ruto!

Reading the bible is one thing, understanding it is quite different.

Did Ruto not steal from the coffers of the tax payers!? A vision have visited the preacher to warn Ruto against many bad things Ruto has done! Nothing Ruto can’t give a clear account of anything he owns! His wealth is simply bloody wealth stolen from ordinary people! Preacher man should command Ruto to give everything he has stolen back to the people! Heck, I will take on helicopter to start a taxi business flying from Nairobi to moyale!

Man of God - can you ask DP Ruto why he stole Mzee Muteshi’s 100 acres? Is this a forgivable sin?

Ruto stressed Mzee Muteshi heart by refusing him to return to his farm until Muteshi died of heart problems! Sins Of this world are paid back here in this world! I beseech Ruto for that callous act of stealing an old man’s land and for causing his death! God in Heaven is watching…..!

Preacher man, I have a question? We all know what happened to Juma, Yebei, musando, Kenei, etc!
These men died in the hands of DP Ruto!

Khadaffi killed by the sword and he also died by the same sword! Hitler killed 6,000,000 Jews and God forced him to commit suicide! We have so many other classical examples I can quote here!

I read somewhere in the Bible that those who kill by sword will also be killed by sword! How can you explain that scenario to Dp ruto?

And do you think that Ruto’s eternal fears is what drives Ruto to lie so much resulting to a mad desire to be president so he can be protected while here on the earth??

Ruto is protected by 257 gsu per CS Matiangi report! Ruto lives a fearful life as you heard him say many times his life is in danger!

When you kill so many innocent people, you develop some hallucinating fears that your life is in danger because the spirits of those you killed are always vexing your evil spirit!

Ruto fears have made him to conclude that he needs protection while here on earth by gsu trained men! The only way he can access more gsu protection is ascending into the presidency and he does not care about the people of Kenya!

The internal fears is what is slowly killing his 💜 heart of darkness! We can all see the vexation in his own fast aging face and body!

Ruto is protected by 257 gsu per CS Matiangi report! Ruto lives a fearful life as you heard him say many times his life is in danger!

When you kill so many innocent people, you develop some hallucinating fears that your life is in danger because the spirits of those you killed are always vexing your evil spirit!

Ruto fears have made him to conclude that he needs protection while here on earth by gsu trained men! The only way he can access more gsu protection is ascending into the presidency and he does not care about the people of Kenya!

The internal fears is what is slowly killing his 💜 heart of darkness! We can all see the vexation in his own fast aging face and body!!!

The insecurity in Kenya is self induced by DP Ruto! @g7, wasn’t your old uncle killed by Ruto in 1992?

Keep on talking until the dead come for your evil soul! Ruto wants a repeat of 2008 Kiambaa massacre repeated by his bandits in Laikipia for his political expediency! But tides are turning against Ruto in Laikipia where he has positioned Oscar sudi as the general of evil!

You keep on beholden to your killer DP @g7! You are selling Kenyans to a mad man hoping he can get to the presidency so all of you kalenjins can start sealing people’s land and property!

It will not happen under the Sun boy! People have wised up!! I can assure you that Kikuyus will not vote for Ruto because they know him far too well! It is them that will determine who will succeed Uhuru! That is the bottom line and you can deposit it to a bank near your Sugoi village!!

Ruto’s chicken are guarded by gsu who force the chicken with riffles to lay 2 eggs each a day. Ruto has thousands of acres that are questionable how he got them! The poor Kenyans can afford 1/8 to grow mboga and waru for their kids!

According to Forbes, Ruto has over $400 billion stashed into foreign banks! Some of this money is stolen from various projects he oversaw in government!

Ruto has 5 helicopters, two huge hangers, and several luxury homes, plus many other toys!

In your spiritual eyes man of God, is Ruto a hustler or a dynasty??

Man of God, do you see how bad Ruto is looking at you in the photo above?

Is that what you are referring to as the stress of the heart muscle?

Your likable shiny face preach man looks good, but the face of DP Ruto looks so stressed out and gloomy! Im afraid you are seeing something in Ruto the naked eye can’t see!

The ACK Archbishop Ole Sapit recently banned politicking in Churches! He directly told the politicians not to come to church expecting to preach to the faithfuls because he thinks politics are wearing down the word of God!

What are your thoughts about Ole Sapit’ s instructions and fo you think all churches should adhere to Sapit!s and instructions?

This is a very good piece of advice from a man of the cloth. It also sounds like sound advice from a doctor or a shrink. Ruto seems to have a type a personality. He is easy to anger and is quite aggressive and at the same time very irascible and pugnacious. I wonder if Ruto's blood pressure is reaching alarming levels with all the stress he is putting himself through in the name of quest for power. This dude needs yoga, meditation and relaxation techniques as well as laughter therapy just to name a few. I am not even going to venter into his mental health. I am not saying that preachers are perfect cause that is a topic for another day.

Please @majasirimali, using such big vocabulary words will scare Ruto into cardiac arrest of the heart! The man of clothes pastor nganga has already scared Ruto badly with his stern advise! However, pastor nganga forgot to tell Ruto to stop using the pulpit on Sunday church services to lie. Is lying ok pastor? Sometimes I get tempted to tell a lie or two pastor!

Please mujasirimali, can you expound on your deep vocabulary so that Ruto does not have to go back to school to buy a 2nd PhD in English?

He God talked to you to tell you why Ruto is hanging out with corrupt politicians? Can someone who says bwana asifiwe be saved and go to Heaven? Do you think Ruto is a Christian man?

Why is Ruto endorsing a person who is known to be corrupt while Ruto is going to church every Sunday politicking and saying bwana asifiwe!?

I’m kind of confused because my Sunday School teacher told me never to partake with evil men! I like Ruto because he says he is a Christian but now I am very confused if I should say bwana asifiwe!