You’ll Face Full Force of the Law in Less Than Four Months: Miguna Hits Back at Matiang’i 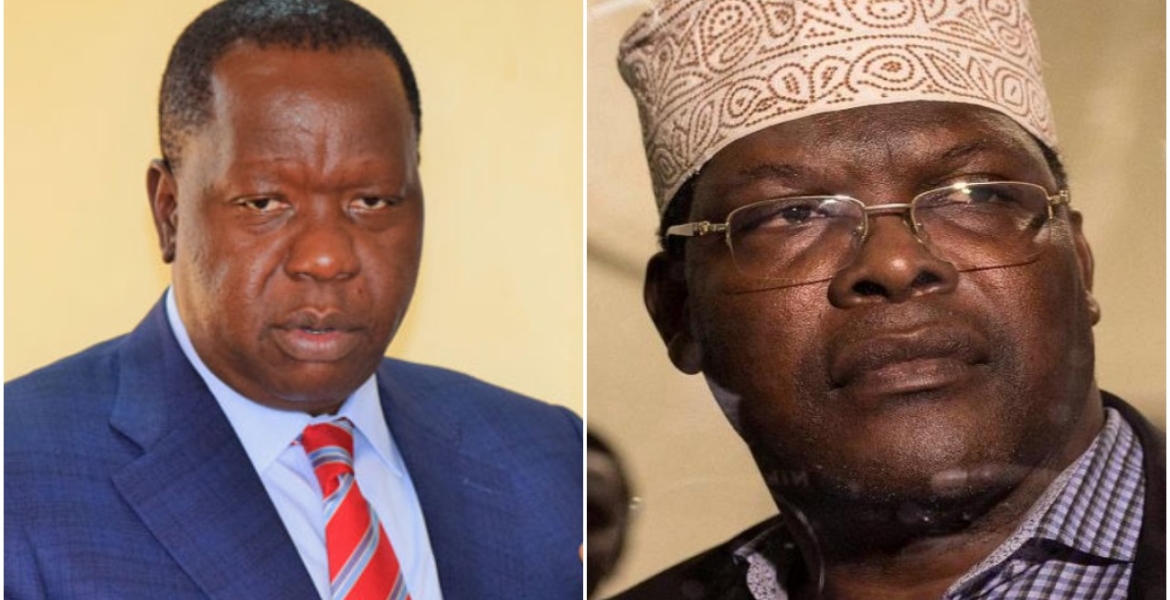 Lawyer Miguna Miguna has responded to Interior CS Fred Matiang’i, who said that he needs to fill out a one-page document to be allowed back into the country.

In an interview with NTV, Matiang’i indicated that Miguna was to blame for his woes, saying he has failed to fill out Form 2 for citizenship re-registration.

He insisted that Miguna lost his citizenship due to the requirements of the old constitution, which did not provide for dual citizenship.

"We have opened immigration offices across the world even in Canada...what is it that's so difficult in filling this one-page piece of paper?"

But in a rejoinder, Miguna stated that Matiang’i has continued to disobey court orders to facilitate his return, promising to ensure he faces the full force of the law in less than four months.

He added: “No matter how long it takes, I will make sure that you obey all court orders and you are brought to account for your contempt of court! Make no mistake about it: power is fleeting. In less than 4 months, you will face the full force of the law. That’s a guarantee.”

Miguna was deported in February 2018 following his arrest for participating in the mock swearing-in of ODM leader Raila Odinga as ‘people’s president’.

The Immigration Department later indicated that Miguna was illegally in the country, saying he renounced his Kenyan citizenship while acquiring a Canadian passport.

Miguna Miguna - stop your silly nonsense threatening CS Matiangi. You would think your damn little head understands the law to do such a childish stupid thing. By the way Miguna, Ruto will never be the next Kenya’s president. Whether Ruto wins or not; he will never be Kenya’s president. So count on freezing your dirty tail in Canada for another 5 years. You are such a dummy and you deserve to be where you are you stupid.

Tou are right Nyaboke. The guy is very stupid.

This goon Miguna Miguna is a close follower of WSR. He is now making these grand standing statements thinking he will scare us. Kenyans will have stronger controls of the government and the judiciary to make sure guys like Havi and Miguna do not abuse them. It’s quite a sad day to hear Miguna talking mafi ya Kuku while he is a refugee in Canada. I hope he never gets clearance to travel to kenya

Miguna just stop cheap publicity. Do you think you are the only citizen outside Kenya. Am a US citizen and had to fill that form to regain my Kenyan citizenship. Why do you think you are so special and important. Follow the law or stay in Canada doing nothing.Upuss.

Go to hell Miguna with your stupid childish threats to the CS. Glad they kicked you out if kenya because you are stupid.

This is another mentally sick canadian who wants to be Kenyan. Deny him kenya citizenship on the basis he has psychosis and he does not qualify.

Get ‘im General! The reign of terror is coming to an end, soon!

The corrupt wakora network of Kenyan judges tried to illegally push Migunax2 through the backdoor of the same courts that he is claiming the government disobeyed. Wakora should refrain from corrupting our only hope, the justice system.Why should Miguna be treated preferentially above other diaspora that had to fill out Form 2?

Love him or hate him but Miguna is a shrewd politician. He knows how to keep his name in circulation no matter how absurd the tactics seem.

The little girl Miguna Miguna is already wearing two diapers. He needs a nyonyo from his mother to stop whining. You fell me?