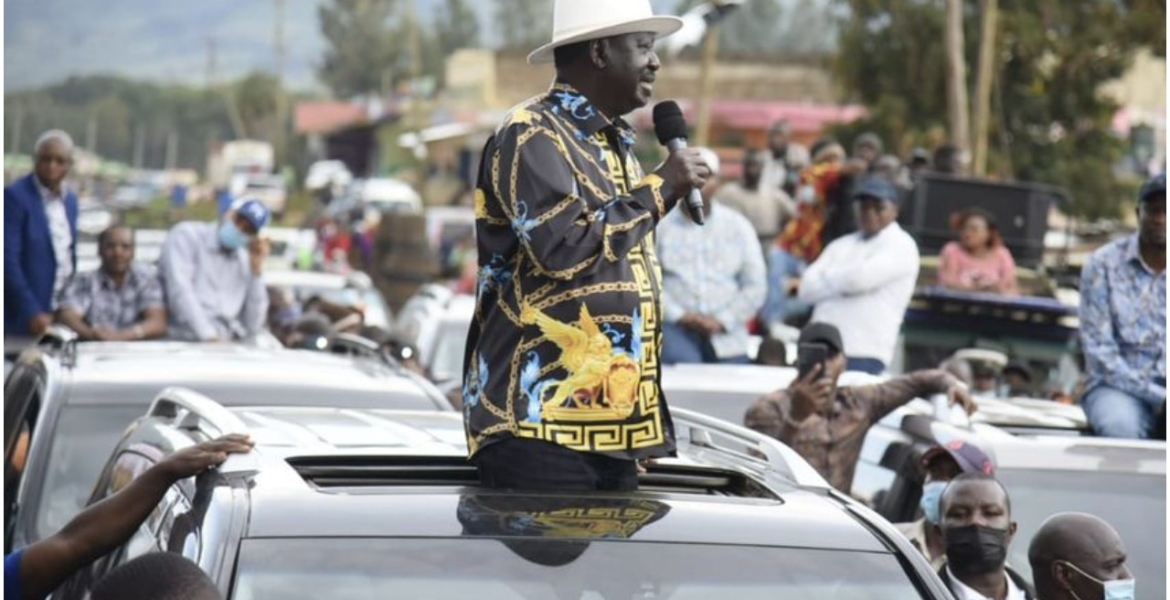 ODM leader Raila Odinga has pledged to write off student loan debts owed to the government by the youth if he ascends to power next year.

Odinga, who is eyeing the presidency, said he will lead the country to economic recovery, a journey he termed as the third liberation.

"We will give the lowly placed persons enabling environment to start businesses. I will ensure the youth are equipped with skills that can earn them job opportunities in different fields. We will also scrap off student loan debts owed to the government," Odinga, who spoke on Wednesday at a public rally in Kamukunji, Nairobi, said.

Odinga further promised to give loans to the youth to start businesses, help them find a market for their goods, and reduce taxes for SMEs.

"My government will give youths loans to start businesses. I will also ensure that those doing businesses get seamless access to markets as we lessen the taxes charged on their goods," he said.

Raila also reiterated that he will introduce a social welfare program that will offer poor Kenyan households and jobless youths a Sh6,000 monthly stipend.

He explained that the initiative, which will be rolled out as a direct cash transfer program, will be given out monthly to two million of the poorest households.

The program will integrate the existing social protection programs, such as Inua Jamii, which Raila said consumes Sh37 billion annually.

“We would add about Sh100 billion to this and expand it to include the poorest of the poor. And nobody should lie to Kenyans that taxes would have to rise for this to be realized, far from it,” Raila said.

“We believe the time has come for a government that spends on its people and not on expensive trips, per diems, mandazis in offices, and inflated tenders,” he added.

Odinga said the cash transfer program would run hand in hand with investment in long-term measures to create jobs, reduce the cost of living, and secure businesses.

This looks like a redacted version of Biden's campaign promise.Anyway this should come as no surprise to many for Raila is know for his proclivity to copying,and emulating USA politicians.To underscore this fact,I am reminded on when he hired Dick Morris ,apolitical strategist from USA.Well this is akin to plagiarizing.Where is your originality Mr.Raila? Dont take the easy way out.

Every one else including the thieving friend of yours Ruto copies other folks stuff! I know you are head over heels with the most corrupt DP in the entire world but get this little piece from me, your crooked Ruto will never be the president of the Republic of Kenya!

And while at it @maxiley, we can’t have a murderer in the state house! Ruto has killed many innocent folks and we will not allow him to kill anymore!

@ Margrar,stop being pedantic.You forget I said,"where is originality". Just because others copy does not we that we all should.That's easy way out.Be original,or at least give credit to the source.
As for me supporting Ruto where did you get this idea?I have said that we need new bleed of politicians in Kenya.And lets give a chance to a candidate without a pedigree of corruption,and crime.

Our own copy and paste guru at work. RAO never seems to have anything fresh up his sleeves.. His worship of the jungu cannot be ignored. Whoever said he'd auction Kenya in a flip of a finger was right.

What would be the motivation to work if one does not have disability and getting paid,it does not happen even in developed countries. How many ghost poor people do we expect?

Raila u can pledge even to bring lake Victoria to central province or in nairobi but we will not make u the king.U n yr father spoiled your name n it hard to clean it back to the majority voters.

He should show where revenue will come from.

More bullshit from these corrupt lifetime politicians. Go home and let younger people handle these issues. Your time has come and gone. Go away and stay gone.