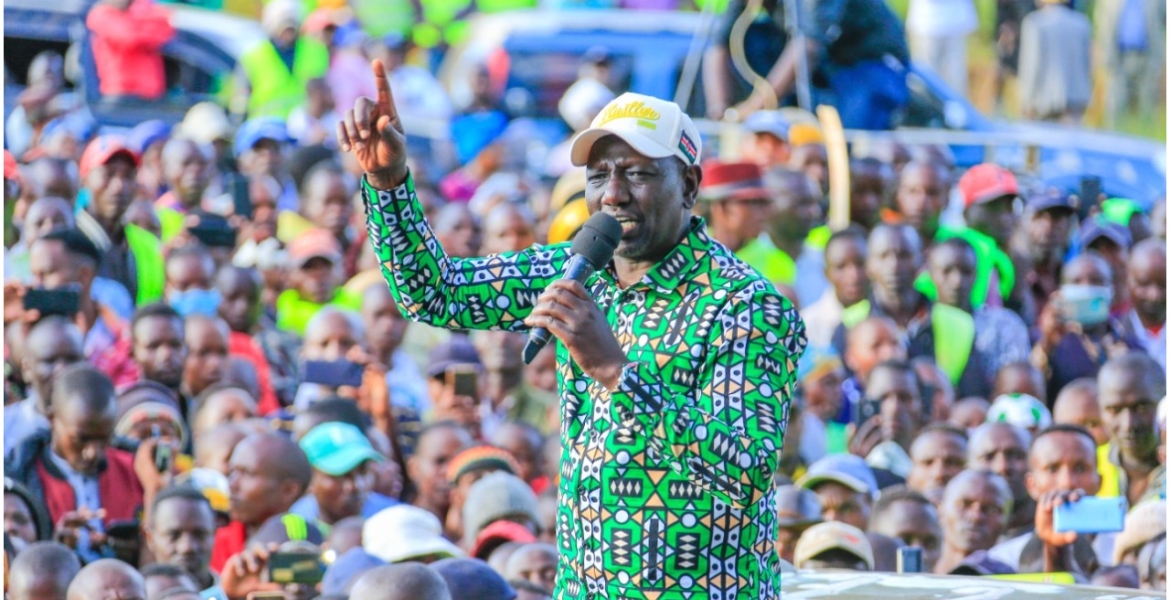 Deputy President William Ruto has apologized to Kenyans over the controversial remarks made by Meru Senator Mithika Linturi over the weekend.

Speaking at Bomet Green Stadium on Monday, Ruto admitted that the utterances were inappropriate and urged members of his UDA party to be mindful of their language while addressing the public.

While noting that Senator Linturi has already apologized for the ‘madoadoa’ remarks, the deputy president cautioned leaders against using political platforms to make inciteful statements.

"For those who are talking about Senator Linturi ...he made a statement which he regrets, a statement that had inappropriate language and senator Linturi has apologized, he has withdrawn the statement and has unconditionally apologized to the people of Kenya," said Ruto.

"We want to say, going forward and to members of my team, the hustler nation, that all of us must mind our language, all of us must be careful about what they say so that we can unite this nation and that is what the Hustler Nation believes in."

Ruto further made it clear that UDA is a national party that does not endorse divisive talks and is focused on uniting the country.

"As a party we believe in the unity of the nation we don't believe in ethnic, regional, or village politics, and I want to say that we do not subscribe to any divisive talks we do not agree with talks that profiles any individuals or groups because we are a national party that brings all the communities of Kenya together," said Ruto.

He added: "Also for the avoidance of doubt, I want to ask the institutions charged with making sure that we have a peaceful nation and election. They must apply the law in a manner that does not create two sets of laws for two sets of groups. We want the law to apply equally so that we can secure our nation.”

Linturi was on Sunday arrested in Eldoret over the remarks and was taken to Nakuru to record a statement. He maintains that the remarks made at the UDA rally in Eldoret on Saturday were taken out of context.

Kikuyu & Kalenjins need to sort out their issues away from National politics.

I am a Kikuyu and I don't have issues with any Kalenjin apart from not supporting Ruto.

These are issues that should be solved a County level.

These are not National issues.

Kikuyus and Kalenjin like using Elections as an excuse to commit atrocities.

@ Guesty, Bro, you sound just like Linturi because I detect some tribalism and hate in your post.

@ Guesty, Bro, you sound just like Linturi because I detect some tribalism and hate in your post.

Thank you Mr. President for apologizing for that clown. Now, let’s get back to business of leading the country. We are behind 100% in Maai Mahiu, Naivasha, Nakuru, and Kenya is a whole. Your leadership is needed at such a time our country is led by weak leaders. You sir, are a strong and great leader

@collusion in Kenya we have uhuru kenyatta as the president. If you are referring Ruto as a president then you are delusional. Ruto is not the president and in fact he might never be one.

Man you think Kenyatta is a leader? Wi Thutha ta mutingoe. He only have a title. That’s one useless leader twathurire gututongoria. He has no idea between irio Na iteo

Amen entirely. 1st term Ruto was president 2nd term Raila is president. Where's does military fatigued guy of what shall I do fame get in? Ichabod

1. He is not the president.
2. He has been in said leadership while the country has gone to the dogs - so no. His "leadership" is not needed, nor is it wanted. His track record speaks for itself - big fat F. He will never be president of Kenya - period.

Ruto wrote the script of madoadoa for Mithika. Linturi was a political hired gun for WSR to deliver a stern message to Kikuyus asking them to leave Eldoret! How can WSR now stand on a podium to apologize? WSR is not truthful!

What amazes me is Linturi himself apologized and now Ruto but you see the likes of Ndindi Nyoro, senator Mwaura, Ragathi Gachagua just to a mention a few defending him. All kikuyus yet they were the majority victims in 2007/2008. All wrong should be condemned regardless of which political wing you belong to.

He should first apologize to his aide for impregnating his wife.

Better the drunkard we have

Young grow up first. What responsibilities?

There we go crypto. Only weak pathetic people apologize. There was nothing to apologize for!

We know UDA is not a national party. Besides a few rented Kikuyus who will go home this year, the rest are Kipkorir and Kibet end of story.

Collussion,
STOP mocking us. Uhuru is the president not Ruto. Ruto who should be a VP is also fighting the government from inside. Moi was very loyal to Jomo. The Madoadoa message is already in the air. No Apology whatsoever can reverse the message.

Willy… am sorry….you and who?

When did Ruto ever apologize for his Madoadoa comments that led to the maiming, burning and killing of innocent Kenyans- women and children a majority? Hakuna siku Ruto ataongoza Kenya. Never ever- Too many innocent souls are yet to suffer under his presidency. Kenya will be chaotic and in a worse state than it is right now