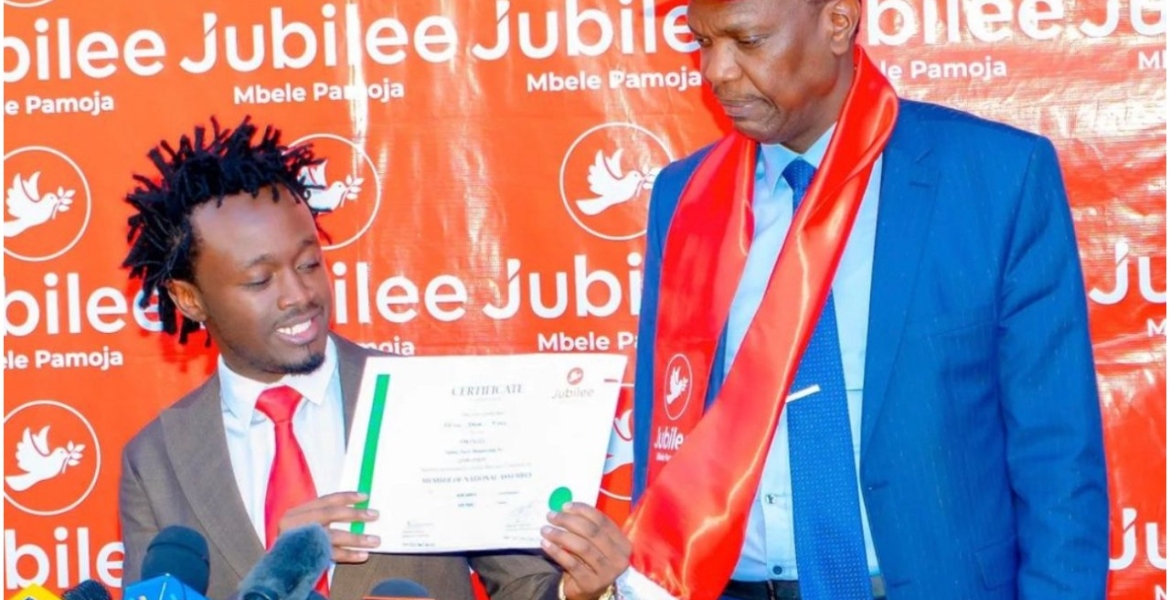 Singer Kevin Mbuvi Kioko, alias Bahati, has been given a Jubilee Party nomination certificate to vie for the Mathare parliamentary seat in the August 9th elections.

Bahati was issued the nomination certificate by Jubilee secretary-general Jeremiah Kioni at an event held at the ruling party’s headquarters on Friday.

“I want to confirm that I now have the ticket and that I will be on the ballot on a Jubilee party ticket,” stated Bahati.

This comes barely three weeks after Bahati broke down in tears as he protested the Jubilee Party’s decision to recall his nomination certificate and asked him to shelve his bid in favor of incumbent MP Anthony Oluoch, who is defending his seat on an ODM ticket.

Bahati claimed that he was informed that Jubilee cannot field a candidate in the constituency since it is zoned for ODM, a constituent party of the Azimio La Umoja-One Kenya coalition.

"I am also in Azimio and this certificate here is not only for Bahati, but it represents many other youths, this is a sign of hope. I respect my president and Raila Odinga but please give the youth of this country chance," Bahati said as he broke down in tears.

The singer vowed not to step down from the race, arguing that the people of Mathare will be denied the opportunity to vote for their leader of choice if his name will not be on the ballot.

"I did not come to politics because I wanted a job I already had one but the people of Mathare want people that can understand their problems, someone that comes from them. I personally have made a decision that I'm not backing down from the race. My name will be on the ballot on August 9. I will not step down for someone that does not understand the needs of my people,” he added.

Politics is the Beginning of the END of Many CAREERS; and this is Why I would advise Kevin Mbuvi "Bahati", Rose Muhando, Margaret Wanjiru, Hellena Ken and other Gospel 'workers'. A good Example is Fredrick Chiluba (the Late former President of Zambia) who went Down quicker than he had Expected.

Which advice?Every investment has it’s own risk.You risked when you went to diaspora to try your luck in strange country and people you never knew.Election candidates like other gangsters also risk being rejected by voters of facing the firing squad.So-called politicians are only elected to loot FULLSTOP