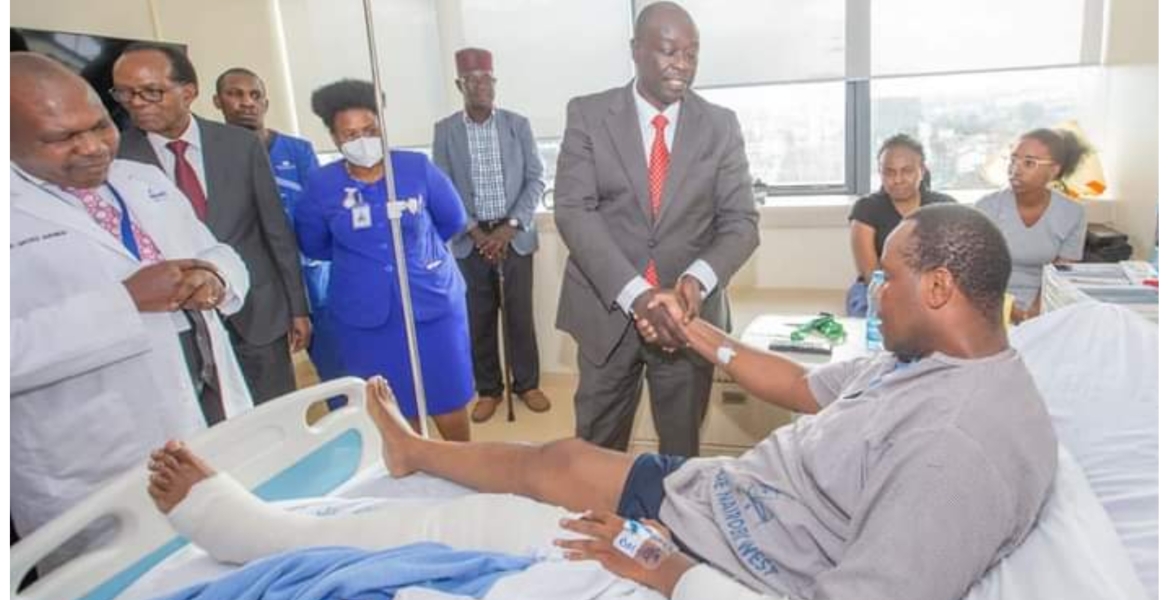 Deputy President Rigathi Gachagua on Tuesday visited presidential escort officers who were injured in the line of duty.

Gachagua visited the officers at Nairobi West Hospital, where they are receiving treatment after being involved in a road accident.

Through social media, the deputy president said he was happy to learn that the officers are recuperating in steady progress and shall be discharged in the coming days.

"Took time to visit officers of the presidential Escort admitted in hospital after a road accident. Am happy they have made substantial progress and the doctors assured me of their discharge in the next few days. We celebrate our police officers for their patriotism & commitment," Gachagua wrote on Twitter.

Gachagua has been in charge of the country since Sunday after President Ruto flew out to attend the state burial of Queen Elizabeth II in the U.K on Monday and later flew to the U.S for the 77th United Nations General Assembly (UNGA) in New York.

While in New York, Ruto is scheduled to give his debut address to the United Nations and hold bilateral talks with several heads of state and government, according to a brief from the Ministry of Foreign Affairs.

The ministry said Kenya will seek to promote its Foreign Policy at the multilateral system, including enhancing participation in the quest for the realization of SDGs and global leadership in emerging issues including climate change.

“At the bilateral level, President Dr. Ruto will lead Kenya's quest to harness relations with the United States of America guided by the 5 pillars of bilateral strategic dialogue partnership,” the ministry added.

The president will also attend to a working session with senior representatives of the American businesses during which he will urge increased trade and investment between the two countries. He will also seize the opportunity to engage other select World leaders on priority areas of bilateral relations.

It's like the Moi era of Freemasons is Back with Vengeance👺; Trying to Steal, Kill, Sacrifice, and Destroy.

shame @PPPian...u still hurting from the loss hahaha pole huyo baba yenyu will never ever ever reside at state house! suck it up its the reality