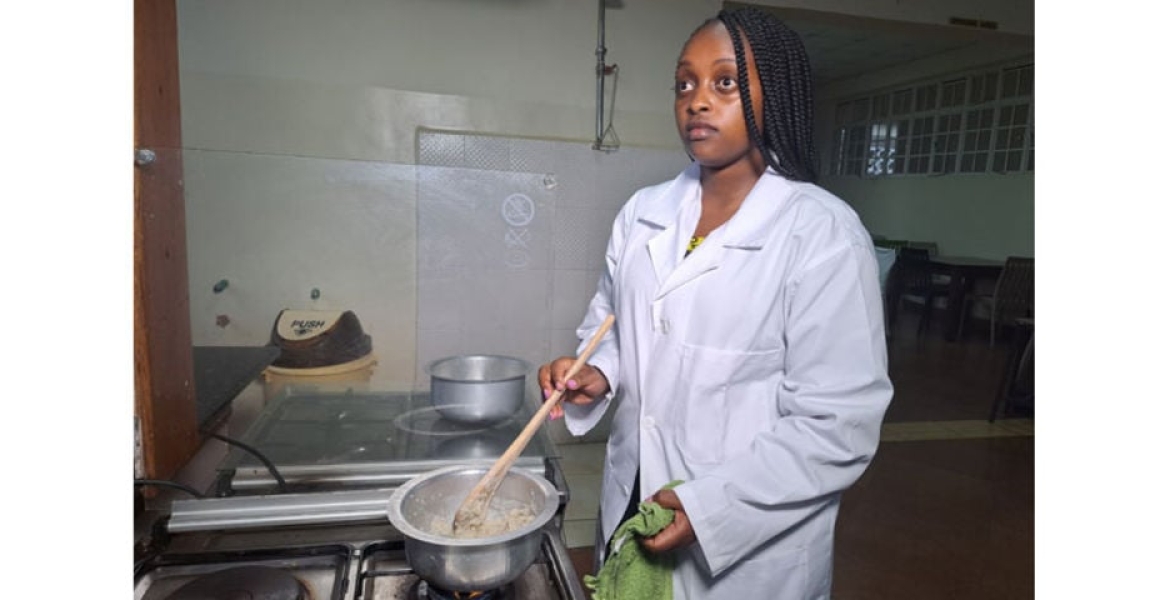 A group of Kabarak University students has found a way of converting grass into edible starch flour that can be used to make ugali or porridge.

Faith Wandia, who came up with the idea two years ago, said she was inspired by the increase in maize flour prices in the country and believes the innovation will help Kenya and the entire world to fight hunger.

“When I started this project, I had goals that I wanted to achieve. I am excited because I know this product will save lives,” she said, adding that the grass flour will retail at Sh35 a kilo.

With the help of Bahati Innocent, a Clinical Medicine student, Salome Njeri (Economics), and Edgar Ruto (Computer Science), Wandia embarked on research aimed at converting cellulose contained in grass into starch that is good for human consumption.

“Last year, maize flour used to retail between Sh40 to Sh55 per kilogram, and it shot up this year to Sh90 up to Sh120 per kg. As innovators, we decided to come up with a project that would make food affordable and save people from dying of hunger,” the 24-year-old Business Administration master’s student said.

She told Nation that they settled on drought-resistant Bermuda grass and Ryegrass, which take only two months to grow. Once the grass is harvested, it is washed to remove contamination, dried, and ground into powder (cellulose powder) before adding enzymes to break down the cellulose into starch.

“Grass is in the same family as maize therefore the starch is identical. At first, we were doing trial and error to see what would work. Sometimes, we ended up having glucose instead of starch and we had to start again. The cost of purchasing the enzymes and shipping was high,” Wandia said.

Bahati said they are waiting for a certificate from the Kenya Bureau of Standards (Kebs) to clear the product as fit for human consumption before they begin large-scale production.

“When Wandia told me about the project I didn’t think it was something viable. I laughed it off but I later sat down and reassessed it. We approached our lecturers and through their guidance, we have solved the puzzle.”

Please be ware of multinationals coming to con you out of your product. Please patent and every other protection you can get.
Good luck and God speed.

Kudos. Go girls go. You can make it big. You have millions of admirers. Apply no reverse gear. Let’s have this done asap.

Congrats congrats on this innovation . We need such brains in our who will help ravaging hunger in our country .
Guys keep it up
Kudos

It is time to return to traditional food.Ugali flour does not have to come from maize flour.Millet and sorghum and even cassava were used before the Portuguese British French and Spanish conquistadors came with their foreign foods.Congrats for looking outside the box those that believe they must have ugali maize meal and it must be white are being unrealistic and is just making themselves victims to GMA processsed bleached flour coming from the farm of bill gates like he really needs the money and then stored in a tanker awaiting storage to Moses Kuria’s silo where he will make a killing selling it at high prices

This is the kind if news I like. I always challenge our scientists to apply their knowledge .Why should they not be making headlines in all scientific magazines?
Knowledge is power indeed. Good work lady.Keep it up.And I hope that you get support from all relevant sources.

Who told you hungry folks need Changaa?? I wonder about you Maxiley! Is it the Luhya in you acting Shenzi?? Or is it the all knowing element in your small brains pricking you down there; in your ass???

@Mwende, broaden your thinking. Cann't you imagine extended usage of anew product? Thus employing more Kenyans,and fulfilling diverse needs... May be you should go back to school if you dropped out.Or layoff what you are smoking.

I think @Maxiley is saying some can use the" unga" to brew.Probably the rich people with means...Yes poor people drink chang'a cannot afford Tennessee whiskey.

Why are you so riled up? Calm down,and correct me,where Iam wrong.I dont mind leaning something new from you.What a say you Mr.smart?