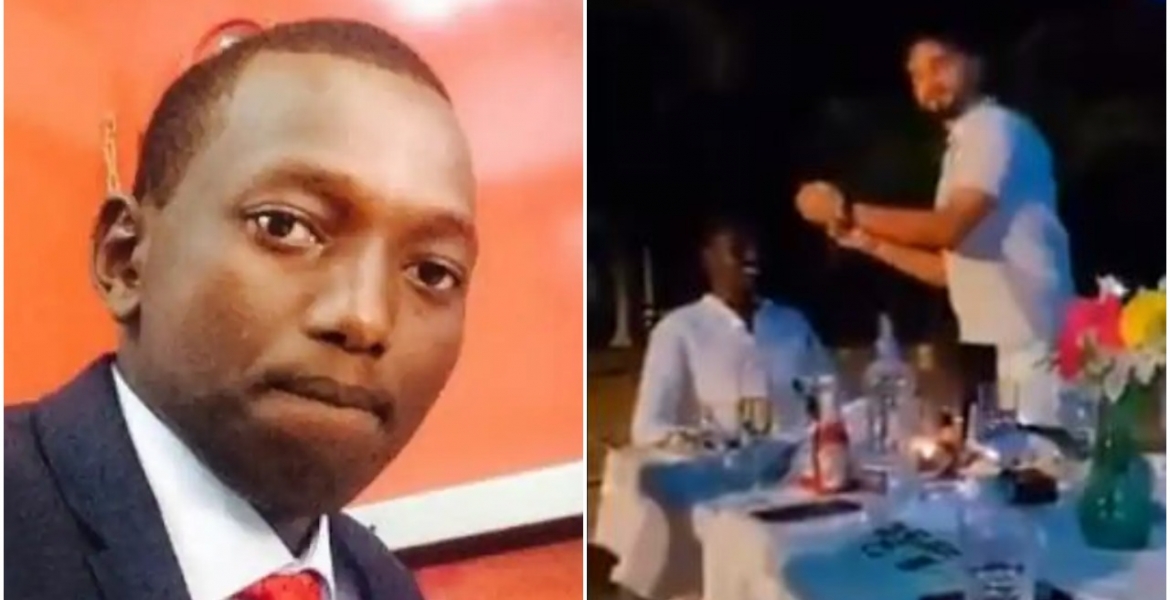 Deputy President William Ruto’s son Nick Ruto has brushed off claims that he is gay.

Nick’s sexual orientation came into question after a video showing a man of Indian descent putting a necklace around his neck emerged on social media.

A group of people witnessing the man gifting Nick the chain during his birthday party are heard cheering up.

The video triggered mixed reactions among Kenyans online, with some suggesting that Nick and the man could be in a same-sex relationship.

Responding to the rumors, Nick said the necklace was a birthday present from his friend, adding that it was important for one to build their circles, celebrate, and gift each other during special occasions like birthdays.

“This will help you understand the value of friendship and comprehend that gifting a friend of the same or opposite gender does not amount to sexual/erotic relationship,” Nick wrote.

Nick celebrated his 30th birthday on Thursday and held a party at an unknown location.

In 2019, Nick was admitted to the bar as an advocate of the High Court of Kenya.

How we ape the West!I stand corrected if Iam wrong,but I dont think our ancestors celebrated birth days,much less knew their birthdays,or considered them important.You are born once,and die once.There is no other birthday.Next milestone day is when death comes knocking.
I guess if you are a Christian,you could be born again.But I have yet to see Christians celebrating their second birthday.Is it something the might consider?
There is actually no significance in celebrating a birthday.I guess other than spending,and expecting gifts.This puts unnecessary pressure on wanna bes...
I can see why someone would celebrate a marriage anniversary given today's uncertain longevity.Not to mention two strangers "fussing" together.That's a challenge worth popping champagne,and "throttling" agoat for.My two cents.

Maybe Ruto’s son, Dick, is having his Indian wife give him a necklace to chain the marriage together for longevity! A picture sometimes speaks 1,000 words without any need to analyze it further!

Chaining that Dick, hah...I guess that would make is graze at ground zero.

Hau nĩ biũ! If you must celebrate your birthday then do it with your mother. Those were the only participants of your birth because we know your father wasn't in the room unless you were born after 2000. If you want more people 3 is a crowd, Invite the midwife, nurse or doctor that was there.

Maxiley I can agree you are using your two sense or cents. You mean marriage anniversary celebration is not aping the west? You don't think life is uncertain hence worth popping champagne for another year lived?

Yes, its western,Not arguing that.Birthday will be celebrated as copycats increase. My point is the reason behind it. In my view celebrating an anniversary makes sense.That's all. It is a western custom that makes sense,if their reasoning is same as mine.

@ Kithoi,before I go into details...Have you ever met or heard a Mzungu with african names? I only see africans with foreign names(mainly wazungu names)I Would like to think names like Onyango, Kamau,Shilandula,Makonjio,are just are valid as Spender Clifford,Winterbottom.Therefore,Iwould like to see a mzungu name his son- Shinamundika Lung'ahu,or Mathenge Ngure.You get the idea.It seems just one way dont you think? Even those kenyan wazungu dont do it.

@ Ndugu Imara Daima,cultural and tradition wise,is there anything we can pride in saying that wazungu to this one from us? And yes Iam aware as people mix,interact on one level or another,after time they imitate cultures,but africans aping way of life seems to be only ONE-WAY.I hope we are not acknowledging that their is nothing african that Mzungu would want...

Lol, and sad at the same time.

He’s gay gay gay gay lol like his father lol. It’s crazy these days, you hang with your boys and make the wrong move, public automatically labels you behind as gay. I remember growing up in Kenya, we used to walk around 5 or more boys deep with our arms around each other’s shoulders and it was fine. The world was not as corrupt back then.

Ruto’s son or any other person belonging to LGBQ community does not bother me. It is not that I understand the chemistry behind it but it is because I believe in respecting people. What bothers me is how people behave towards the LGBTQ community. These people are human beings. As long as they are law abiding people, they should be respected and protected by our government. Even if we see it as sinful… hate is not the answer. Respect is the answer. We should leave them alone… we don’t understand it… I won’t even try to explain it. All I can say is: Good citizenship is what is required of all of us. What people do with their lives is not my business. We must work together as as good citizens to fight the common enemy of mankind: poverty and all forms of human enslavement…

Me too have no problem on peoples choices does not matter in what but the dictatorship of the minority is disturbing, annoying .it is always their rights as if the rest of us should not have our rights - dictatorshp of the minority must stop

Are you talking about yourself being a minority because you are a lesbian @loise? That is your business if I care to listen to your troubled life! You can take Ruto’s gay son to build your minority status!

Killing others is a choice individuals make too! Evidently you don’t have a problem with that as well even if it was your life in danger @loise!

Gay or not that is the least the young man will have to deal with.
If it's true his Dad was involved in Kiambaa massacre, then unfortunately, he's in a huge trouble. Notwithstanding his innocence, he've got to bear the punishment himself, his kids or his grand kids. Someone in the lineage will pay.

Necklaces and Indians. Is that a yoke from the dark Kingdom? Who will trust Gupta again. They messed up Dr Zuma and RSA. Trillions of rand stolen.

For those of us who enjoy birthdays and other pointless life celebrations as some may deem, we shall party, receive and give presents and enjoy them... Kila mtu na starehe zake. Whatever makes one's journey here on earth bearable and enjoyable... 🎉

@tausi - Hope you remember to save for when you breath your last. Don’t leave others with debts to pay to include your burial costs! They would also like to enjoy the same way you do enjoy now!

@Mark... Worry about your dead body and debts first. My folk and children will have it bearable.. My body will be cremated and my ashes put in an urn. At that time my loved one's will decide what to do with those ashes. Life is for the living alaa!

I don’t worry about nothing! I don’t have to display my plan here because it is a private affair! But rest assured that no one will ever come to you looking for any help! Not even to buy a hand kerchief to wipe my ass!

The dude (Ruto’ she-son) looks like a damn lady! And the Indian she-man has found a catch! Thus the engagement necklace! Bhang, bhang, bhanggggg!! But you know Ruto seems to lien in that direction too! Like dad, like son!!

This is bullcrap.Painting DP names badly will only get him sympathy votes.So if am seen in a bathday party receiving gifts from my boys some idiots or busy bodies will start vomiting venom that am a Sodomised Fagget??Come on guys let’s not stoop too low like envelopes??Give us a real picture or video to show Nick is a faget not yo just spoil anybody’s name??As I always says Ruto is the 5th president in 2022 unless unknown shit happens.He may not b my candidate but he is the only man to beat come 2022.

Interesting... Maxiley how about to each their own... Else if we equated everything to what our ancestors did or didn't do this conversation would not happen since after all our ancestors are bila clue what a computer is. A long while back I met a colleague who was originally from Europe and he said in their culture, the birthday boy/girl is who gifts his/her friends. I liked this idea then again like I said to each his own...

@ Vitimbi, technology is not from western,thought much of the improvement is by the westIt is the interlectual human achievements collected over the years.Egyptian pretty much invented mathematics.Africans were smelting iron way before mzungu showed up.
How we marry, dance,mate,socialize,and the way we behave toward one another would still exist without computers,or cars...
Like I always say, if it makes SCIENTIFIC sense,its good for humanity. Gay marrying,or agroup celebrating something in whatever manner has no bearing on science,or human advancement. Let's see wazungu knock their front teeth,and claim that it is a borrowed african culture...Why should we be the only ones aping?

William Ruto should accept his son is gay.

Ruto knows snd quite frankly approves of it!

He's moist. Y'all keep waiting to see him suck monster peen on IG live to believe it.

Why do you all motherfckers care about someones sexuality? You dan go fck chicken or a donkey or your wife husbnd, mice, for all I care, but in all cases do it for yourself. No one needs to know that personal crap.

@muruateru! You do all that crap dude!? With donkeys, rabbits, dogs, rats, cats, Nick, roaches, monkeys, etc! Surely you are really a muthafaka for real! Nick is calling you…… and you can take him some bling bling ear-rings and a nose silver hook up!

Shenzi sana. Understand my post before spewing your response you illiterate!!

@murutdsito - Every one understood you claiming to be a docket fucker! Don’t deny what you have already admitted to! Wewe ni mafi ya Kuku! Na kubafu kabisa!

Shenzi sana. Understand my post before spewing your response you illiterate!!

People's sexuality shouldn't be anyone's business, it's their problem.
If he wasn't RUTOs son,would we be talking about it?
Tuachisheni UJINGA.

@ Kora Kanini,that is the position Politicians should take,instead of scoring political points pandering to the religious,and homophobes...
I hope that when President Uhuru told Obama that homosexuality in Kenya is a non issue,he meant that ,"its nobody's business".
Hey we have more important matters of human concern,than to worry about how if a man is gay or not.Regardless of your sexuality, we are faced with the same human problems,especially those manmade.And to solve these problems, we need good ideas,and good people of integrity,and principle.Is anybody going to turn down a cure for cancer discovered by a gay person? How about if Science shows us that homosexuality is much like being left hand,or bald headed.How many will change their minds. It pay to open our minds.Otherwise how will we know the best idea?

Why is this working your emotions @kanini? Are you gay?