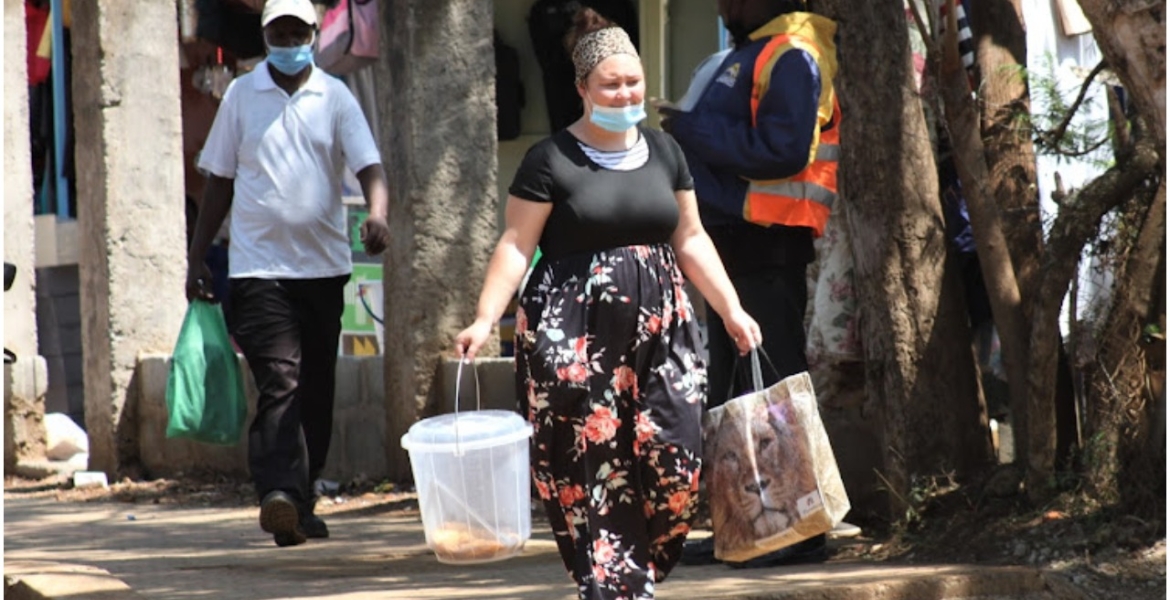 A 28-year-old American woman who was recently pictured hawking mandazi on the streets of Kisumu city has spoken out.

Silvia Bichanga says she married a Kenyan man in April this year, but the couple fell on hard economic times a few months later, forcing her husband to shut down a computer shop he was operating.

“Life became so hard after we got married that we were forced to close down a computer shop where my husband used to work,” Bichanga said in an interview with a local daily.

Her husband soon started repairing laptops at his friend’s shop in downtown Kisumu, but what he earned was not enough to sustain the family.

To supplement her husband’s income, Silvia teamed up with a friend named Eve Ochieng and started making and selling American-style street foods by the roadside, something their husbands thought was insane.

They later secured a small stall near a car wash and named the shop ‘Mzungu Pretzels’ where they prepare and sell mandazi, pretzels, apple pie, and pizza pockets, all for under Sh100.

Because sales were initially inconsistent, Silvia resorted to hawking on Kisumu streets in a bid to build a customer base. This worked well for her, and she reports making a profit of between Sh1,500 and Sh2,000 a day.

“Most people say, ‘this is how I can experience America right in Car Wash’,” Bichanga said.

She admitted that she gets well along with men as opposed to women, many of whom question her motives.

“Some make discouraging statements like ‘why are you hawking, yet you people have money and you could even pay my rent!’ Little do they know what’s actually on the ground,” she said.

Bichanga came to Kenya through a Conservative Christian Mission and met her husband in 2019. They dated for two years before wedding in April this year.

Someone tell the American embassy about this. ASAP.

Why? To congratulate her or to send her the hardship cheque? She qualifies for both!

Otherwise, this is a perfect lesson to Kenyans who have distorted image of the west! They do not understand that there are people of all social/economic standing! Let her live her Kenyan life, she has an option to migrate to America with her family, but, she’s chosen to hold on & try out things.

Wacha upuzi! Why should the American embassy be told? Isn’t she making a living, unlike many other Kenyans who always expect handouts? Shenzi wewe!

His mind is that of many Kenyans m! Free stuff! This woman can get a free check from the US embassy but she has decided to work! The black race is terribly cursed! Always spreading out a hand to receive but can never give!

Wow usijaribu kuoa msichana wa watu ikiwa hutampea maisha mazuri. It should kill this kisii man to see his wife in that position. Kisii men are dangerous. Watateseka hivyo and then the day he will set foot in America, huyo bibi atatupwa kwa trash can as he chases manyangas huku. Girl go home. No man is worth that kinda hustle. YOU are giving up everything, what is he giving up?

Your statements are full of gamut of idiocy! This is an epitome to true love irrespective of someone’s economic status! She’s perhaps happy otherwise, you can have all the worldly wealth yet bankrupt happinesswise, no peace! I would rather lead her life & I am feeling loved and respected. Money comes and go!

You are one stupid fella! Your brains are ver short handed!

This is truly defined love, this white Girl stayed through think and thin of life transformation,My
African sisters would have resulted to other illegal money making business. Stop and learn a lesson from Bichanga family.

Wewe roho chafu full of dark spirits. Instead of wishing them well, you wish them bad stuff. You are evil
For some of us, we just wish we could find such a down to earth, humble & hardworking woman coz she’d inspire me like crazy. The opposite is also true - lazy, demanding wife will make me relax back and let marriage break ........ been there, done that

Which truth when you are displaying your idiotic ignorance here like a mad man? No wonder Kenya still languishes in poverty because of smart Eric’s like you! You can’t even afford a lazy bush wife!

You do not need a man or a woman to inspire or complete you my friend. That is the mantra you should be living on .

All nonsense! She is doing much better than the Kenyan husband! Muzungu attitude of finding a solution without expecting manner from Heaven! This woman can multiply money very quickly! She is willing to work hard to make a living!

I’m gonna go get me one Muzungu and forget the Kenya gold digging women who wants everything for free!

She admitted that she gets well along with men as opposed to women, many of whom question her motives.
Kenyan women tulikosea wapi - wivu Gai

Accurate review of most Kenyan women and some men! They never see anything good in anyone - period! Why are we so negative?

People are a product of what they hear and see! Those with a negative attitude about the white lady were brought up that way! Their state of mind is deeply rotten and they can never see anything good! Keep working hard Mzungu lady; it surely will pay off! One day at time mama!

Kenya women have burning wivu and severe laziness! Women in Kenya are takers and have lost the spirit of working hard like our mothers used to do! No wonder Kenya men are now turning to foreign women to find better suitors! Even wazungu men are beginning to reject marrying Kenya women in fear of being killed and stuffed in water tanks like Cohen!

I think PAPERS are in the Process; and soon Mr. Bichanga will calling America home.

Now that’s a good wife. She didn’t pack up and move back to America when things got bad.

She is a very good example for the Kenyan women who give their husbands pure hell! Unfortunately it just takes one muzungu girl to teacher a bunch of lazy alfalfas what love is all about - perseverance!

What’s wrong with this? The lady is an entrepreneur and this really isn’t news. Don’t make it about her race, talk about her ingenuity. This article paints women in bad light.

Life is so funny

What’s funny about life? She is making things you like to eat! Isn’t she? Life is funny to you because you are lazy!

There is nothing wrong here, the issue I have is that every a white person does becomes news.
I have yet to see a KENYAN in USA magazines, hawking anything, or even the folks who run their own businesses.
GOOD LUCK BABY GIRL.

Triiiiiiiiiiiu! What happened to you and your mama watoto? Alikuwa muzungu au Mugatana kutoka Kenya!?

You just failed yourself Kibe! You took your Kenyan bush mentality to America and the Mzungu girl fought you lazy ass! Better yet you may have had other concubines that destroyed your love affair with the Mzungu girl on boy for that matter! Just shape up and she/ lye will forgive you!

Where is @maxiley with his chicken feed ideas? Hold on your zMejico girl Sir! She may end up cooking tomalies for you in the streets of Kakamega!

Ha ha, Burritos and Fajitas would be such a hit for sure :-)

Yes! @maxiley wishes he had met this hard working American girl before she crossed the Oceans! Sorry @maxiley, she is now taken and cooking mandazi huko huko! Stick to your Mexican girl bro!

Good for her. This should teach some of our people to stop kulia lia sijui hakuna, kazi , hakuna chapaa etc and waiting for handouts. This is what self realization is all about.