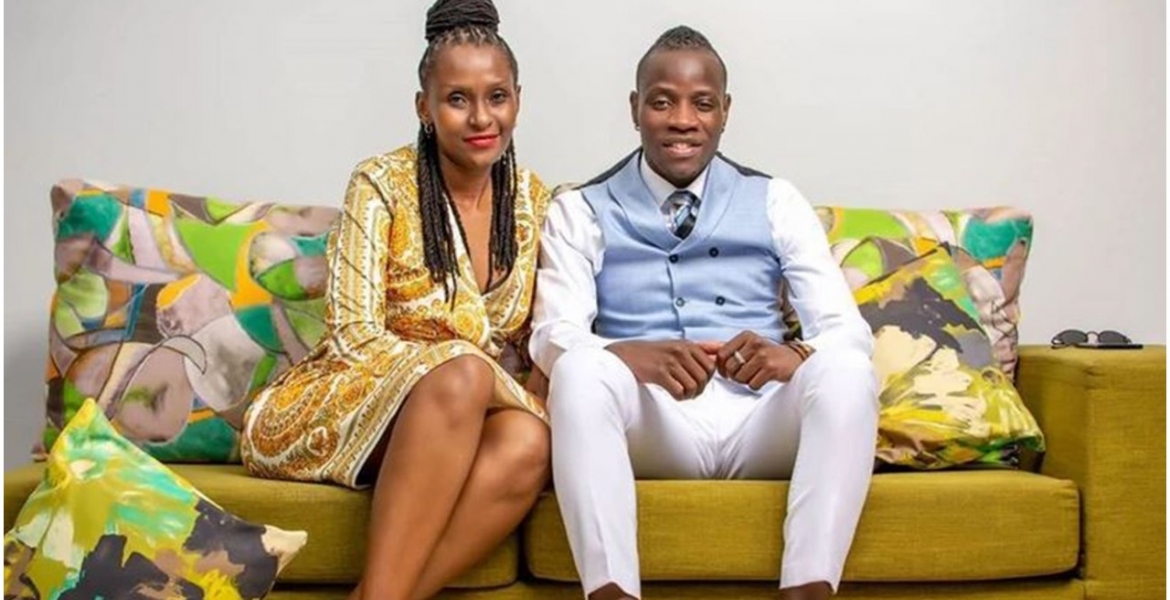 Esther Musila has broken silence about her relationship with Kenyan gospel singer Guardian Angel, who is 20 years younger than her.

Guardian, 31, proposed to Esther during her 51st birthday last week after dating for one year and two months.

Since the couple went public about their relationship last year, they have been a subject of online talk due to their 20-year age difference.

Speaking during an interview on Spice FM on Wednesday, Esther said their age difference does not bother her, adding that no older man would give her the happiness she gets from Guardian.

“If I had met a 55-year-old man, maybe, according to what I should be with, he would never match Guardian. He would never fit in Guardian’s shoes. Age is nothing but a number,” she said.

When Esther first met Guardian, she was not looking for love but their friendship blossomed and turned into a romantic relationship.

“For me, it is not about the age. I don’t even think about how old he is. If I’m not happy then my relationship will never be okay. I will never be able to fit in the way I want. I’ll be forcing things which I have done in the past and I am not ready to live my next life making the same mistakes I did,” she added.

Esther, a mother of three, aged 29, 26, and 22, met Guardian through their mutual friend Maina Kageni, a radio presenter at Classic FM.

Esther has been working with the United Nations for the past 18 years. She previously worked as a banker.

Guardian, who is known for songs like Nishike Mkono, Swadakta, Rada, Utafurahi, Nibariki, and Kuoshwa, denied claims that he was dating Esther because she has money.

Mwakilishi, this is not efing news.
You cares.....
So if I want to marry a 22 year old girl, that would be news?
Stop this crap.

But remember a 22 year old is your great grand daughter! A 70 something old man old to respect the kids! Just a humble reminder to you sir!

Ma'am, it's always a willing BUYER, willing seller...it's the nature of the game.

Are you telling us what is in your dirty mind @kanini!? It is called rape dude! Isn’t a 22 year old girl your daughter’s daughter? Ghee Weez! These carnal men of today are useless!

I dont understand why people make abig deal when women marry younger men. In fact women to it better,the mature way. You hardly hear,or read that a women married a thirteen or fourteen year old.But this is not the case when it comes to men. Bainwise, 55,and 31 are very mature people.While a man of 60 marrying a 15 year old girl is hardly the case.Not to mention that many would agree with me that a 15 year old has not reached age of consent,compared to in this case a 31 year old man.
Other than fear of one checking out before the other,I dont see why it should be anybody's concern anyway. And dont assume that every couple wants kids...So long as no laws are broken. After all I would rather have 10 years of blissful marriage to an older person than "hellful" marriage to same age or close to...Mmmmm everything else being equal.My two cents.

Max what do you mean by checking out before the other? I guess you meant death which fyi doesn't care who is older among the 2 and can snatch either at a moment no notice.

Statistically older people die at arate higher than young people.Iam talking of old age,or so called natural death. Can you really arque with that?

I think average life expectancy in Kenya is 66.70 for men and 68 for women. And of course that cannot tell about a particular individual.That's statistics work.

Love is love. If he was 51 and she was 31 it would not be a topic of discussion. But real talk, her oldest child is 2 years younger than Guardian. Kinda creepy to think about it but hey I’m not here to judge. She’s a good looking lady.

Come on! Men should have No business Marrying women who are Older by at least 5 yrs. Meaning this of 20 yrs Apart is Shenanigans gone too far.

I suggest you go stop them from getting married. Just walk up to him and tell he has no business marrying a woman 5 years or more older than him. Say it right in his face

What is the magic about 5years? And is it you who should set that "rule"?

..what is his mother saying, I wonder?

She must be upset. Wambui otieno boyfriends mother collapsed due to such news. This dude wont be having kids but may be a sec wife in 10 yrs

It is their personal business to live and behold each other. No one should get between them!

Well stated at Caro. Its how the man uses his ‘tools’ that matters, young or old is irrelevant. Mradi apige sawa…lol!!!

Does the woman ever use her charm and tools ili Pige sawa @shiro? Guys like to be properly entertained too!

Embu watu wapenfane
It’s their business and it’s their life
Life is too short to think about social media
They will always talk
Am happy for them
You are as old as you feel .

Not true @kui that you are as old as you feel! You are as old as your number of years indicate! 20 years old is simply 20! 40 years old is exactly 40! The age difference is simply clear here! Can’t you see that? The woman will have another 5 years of good sex and then those organs will start shutting down one by one! It is called biological clock! The dude will start looking elsewhere because he will be at his prime sexually! And all hell will break loose….

Educate me…I thought women are more sexually aroused and active between the years of 45 to 65? This is the time their men cant keep up with them sexually? Google it!?!?

A woman’s sexual arousal starts failing at the age of 34/5! Between 45/65, the woman’s sex organs can’t even warmly respond! We call it dry sex!

The age you mentioned here is for a man’s prime activity. At 80, a man can keep up with a 30 year old woman without any performance hassle!

All the reason you see some old dudes marrying 20 somethings to help meet their appetite and expectation.

Please google @shiro! Don’t know which google you found the wrong info you presented here! Women dry up way early, except looking pretty on the outside.

Maybe you are talking about yourself; which is an overrated exception to the rule! Just google it again - and in the right places!

@ Romano, may be they did not marry for sex,the way you understand sex.To them just cuddling and enjoying each other is better than "penetrative "sex.
Folks, broaden your horizons...

Fortunately for the young man, the law allows him to marry a younger girl to sire kids.. or else get a MWK for the same if he still loves this lady to the extent of having her for the rest of their lives.

I admire their confidence. They love each other and no home was broken in their unity. They are happy and if their families accept them, that's all that matters. This would not be news if the roles were reversed. Good luck to them.

False @sukari! The roles can never be reversed!

Man’s roles are way different because men’s role is to find a fitting partner! As long as the woman is of age, she qualifies to be a helper to the seeking man regardless of age!

A helper has to adequately be able to perform all the duties assigned to her; and of keeping the man happy and satisfied in his homestead!

What happened to the father of her three children?? How can no one is asking. What is his situation??

I fail to understand how this is a news item. It belongs to a gossip column. Meanwhile real news, such as the conviction and sentencing of the headmistress wife who plotted the murder of her headmaster husband is nowhere to be found. I suspect someone else has been editing Mwakilishi the last few months.