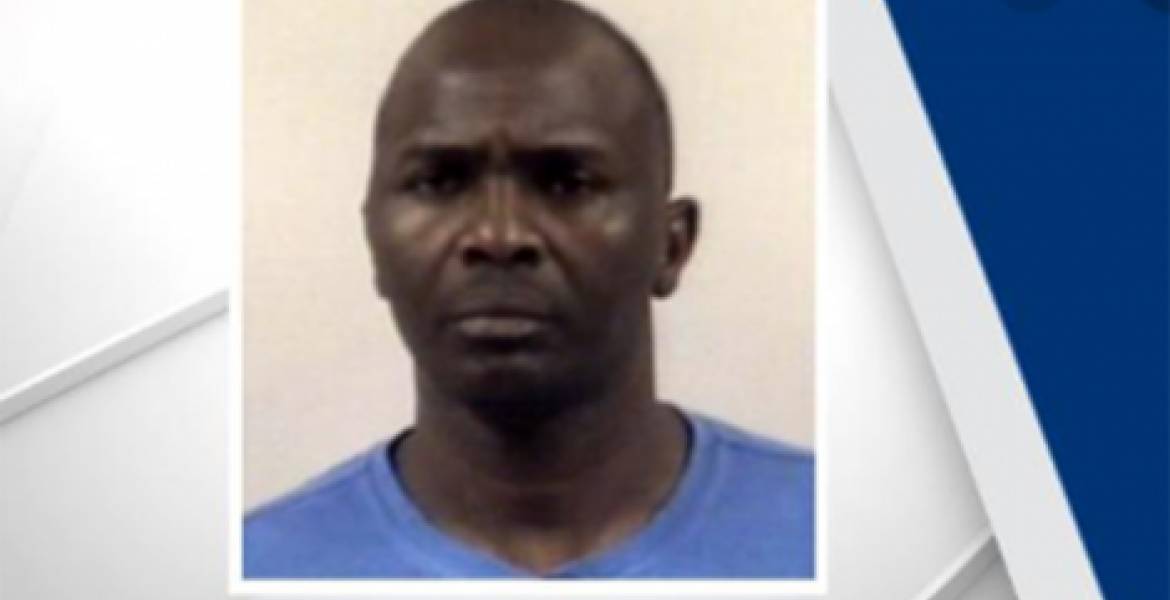 A 49-year-old Kenyan man in North Carolina has been sentenced to 20 years in prison after he was found guilty of first-degree forcible rape.

Joseph Ngigi Kariuki, who previously worked at a Smithfield Assisted Living Center, was convicted on Thursday by a Johnston County Jury and sentenced to prison.

Kariuki, who was arrested in December 2019, was accused of raping a 79-year-old patient at Brookdale Senior Living on Berkshire Road where he worked as a caretaker.

Officers from the Smithfield police department were called to the facility at around 3 am on December 19th, 2019 to investigate the assault. A supervisor at the facility detained Kariuki as soon as the allegation was made until police arrived.

The victim was suffering from Alzheimer’s disease when she was sexually assaulted but she passed away before the trial took place.

Superior Court Judge Clair Hill sentenced the defendant to serve a minimum of 20 years to a maximum of 29 years in state prison.

“The Johnston County District Attorney’s Office is pleased with the verdict and the sentence imposed. We hope that this helps restore some measure of dignity to this incredible lady whose life was full of such tremendous love. Our office also hopes the victim’s family members find a measure of justice in this outcome,” said Assistant District Attorney Caitlin Slavin.

“We are now confident that this predator will never again be able to harm a member of our community.”

Police charged Kariuki, a resident of Clayton, with second-degree forcible rape and was held in the Johnston County jail under a $100,000 bond.

Dude where u at u can get a $10 gas station hoe n u had to rape n to make it worse a senior citizen, 20yrs ain't good enough take this idiot back home for a good treatment of a tire n fire.

A thing like this begin with Flirting; then Touching, and Horning. Before you know it "the man is into someone that wasn't Ready, or just Out to Ensnare you.

Wow! I would not make excuses for him. Only a weird creep looks at a cūcū aged woman and tells himself "I gotta have me some of that".

There are too many KANYAUs in USA, why brother why?
I have said it before, use your bigger head...the small one will lead you in trouble.

Raila/Zetani Ngigi should publish a book describing why he preferred the 79 year old PENGENYE to many single Kenyan ladies living in Clayton.Pole sana bwana,Tamara yaua.

@ Morris Menye, your statement is abit flawed here...You make an assumption that he prefers 79 old women to single women living in Clayton.He obviously used his "small head" to figure out that there is less resistance from an old 79 year old woman with disability than from a young Kenyan able body lady... I will take it that you are being facetious...You suggestion would probably make some sense if the sex was consensual
Anyways, in my opinion,this fellow has amental problem,even though they did not take him to a mental hospital. Seriously,how many 79 year old women in a nursing home would sexually arouse an average man? The answer is found in why you seen porn full of young firm,and shapely "things".

Is that not a death sentence surely “Pambana na hali yako” Tamaa imekuua utakuwa mzee by the time you get out.

BTC: Before the Berlin Conference of November 15, 1884 to February 26, 1885, no African man could even imagine or dream of raping a 79 year-old lady, old enough to his (Ndugu Kariuki's) grandmother.

ATC: After the conference, anything goes!

Oh no, I can't belive this? I knew this guy who have lived in Raleigh, NC for some years as a very strong Christian and a family man. His mum passed away recently.
I really doubt this, but who knows.
This is why, I rarely trust judicial system when it comes to people of color in the southern states.
May the good lord have mercy on him and his family.

@ SAMco18, if you knew him,that was then,and he probably changed.And did you really know him? Seemingly nice people do commit horrific crimes.
If he is innocent,the truth shall eventually come out. Hopefully soon cause delayed justice is denied justice.

I dont see anything is may statement that would elicit happy or sad emotions.Could you please point that out to me?Thanks.

There is a long history of killers that people made similar statements about. I'm sure you've heard them, "he was such a nice young man, he was polite and always kept to himself'. We seldom know what goes on in a person's head until it's to late.

Btw most slave traders and holders were deeply religious either Islamic or Christian. Being Christian, or god fearing doesn't automatically make you a good person

I agree with you, that could there be justice mishap mahali...usunguni hapa mtaona, keep pointing fingers

He looks like a mathare north makangas. Aka hustler.

Was he taking Viagra or similar drugs? 80 yrs old cucu in diapers is not attractive to turn on the man.

Sorry guys but I really doubt this story.

Most guys state side are dick starved as they lack game,swag for western women. He will now be a tool for bussy bandits in prison.

Naiwe funzo kwa wengine, if he did it he should rot in jail.

Foreign cultures are really destroying our people both at home and in foreign countries.
Our men never used to see the nakedness of our grandmothers. This was a taboo. We had mid- wives who used to help women give birth, not men.
The chores of men were separate and well defined in our souls. The chores of women were well defined in our souls. There was no open discussion or competition about those chores but each and everyone knew how to behave towards his family and towards his community. There was no competition among the sexes.
There is alot of suffering, corruption, kidnapping, prostitution, lack of respect towards one another,crimes and all manner of foes and evil in our societies. Jails are becoming a new institution for our people just like it became for our brothers and sisters who were carried to foreign lands as slaves. Blood crying from the grave calling for peace and cleansing of our land.
This cannot be allowed to go on.
Time is calling for us all who are following anything foreign blindly that is negatively affecting our society or not beneficial at all to take time off and reflect and leave such behind.
" An unalysed life is not worthy living".
Let us all recall who we are and act accordingly to save ourselves and posterity from our enemies both within and without.
We should all support any alternative in our communities to what we see today- As the west heads north, we must head south to fulfill our journey.
Any alternative to what we have today!!
" Ee mungu nguvu yetu"!!

@ Anonymous UI, one big take away from your summery is."there was no competition among the sexes". Yes, we were created to complement and cooperate with each other. When you upset that order,things to haywire.
If you have happened to read some of my posts,I have been lamenting on how women are committing scams,and terrible crimes that were in the past a "preserve for men",so to speak. Lines that used to keep us in line have been blurred. Change for the good is good,and pretty inevitable.Its the change for the worst that is killing us.

This is fake news

It is fake news. Those of us who know the truth will stand with him

I do not believe this! I know this guy and this isn't true. How many black people are in prison for years only to be found not guilty of the crimes they were accused of after so many years? Especially the southern states... nope! Not true!

Huu udaku mtaacha. This is an old story that isn't true. I know this man he can't do that. Do ya'll how many black men are rotting in jail for things they never did? After a very long time they are found innocent? Please stop this kaswende.

I want to testify of how i got cured from Herpes By Dr Ofua Ofure, I have been living with this disease for the past 11months, i have done all i can to cure this disease but all my efforts proved abortive until i met an old friend of mine who told me about a herbalist from Africa who cures several types of diseases such as hepatitis AB and C, Human Papillomavirus (HPV), Herpes and so many more. though i have doubt about it, I decided to give it a try when i contacted this herbalist, he helped me cast a healing spell and send me a herbal medicine which i make use of according to his instructions and now behold the herpes is gone and i now have my life back, If you are out there living with this disease such as listed below

...do you have something to heal CORRUPTION? that is what we look for here....

OHHHHH NO!! I know this guy very well and I've worked with him. I'M Double sure he cannot do this crazy act. We men foreigners working in this field of Healthcare we need to be very very careful coz host citizens wants to destroy us. So far I know more than 4 men foreigners has been accused of similar acts issues but after a thorough investigation they find out the accuser had bad intentions. Especially if a coworker Americans lady does not like African man things can turn sour. For real I bet that guy something went wrong with lady coworker to accuse him of that act. God will intervene and truth will come out one day. And you the acuser wherever you are hell is waiting 4 you. Joseph be strong in the lord as always. We praying for you. Gosh

All you saying that you know him and vouch for him, PLEASE find a way of registering your statements with the relevant authorities there .. that way you'll go a long way helping the accused. Pls take a step...don't just say it..

wtf ...to you all investigators who knew this imbicile... can you find out if cops did DNA of siemen was found his cucus inside cucus vagina---- that marched this idiot whose wheels kept turning.
omg

Hello everyone my name is Mrs Caroline.

VIRUS) by Dr LUCKY herbal , i visited different hospital but they gave me

treat the symptoms and it never cured me. on thing one faithful day a

many people from herpes virus with is herb medicine,then she told me to

contact him that he we cure me with is herb . when i contacted Dr LUCKY he

seriously worked for me, my HERPES result came out negative. I am so happy

as i am sharing this testimony. My advice to you all who thinks that there

Dr LUCKY healing herbs, he also have the herb to cure any kind of

hepatitis B,C A. and HIV and HERPES VIRUS , Remember delay in treatment

leads to death.. contact Dr LUCKY on is email at ( herbalcure09@gmail.com )

MEDICINE , thanks to Dr LUCKY for curing me with is healing herbs medicine

i am now free from herpes virus