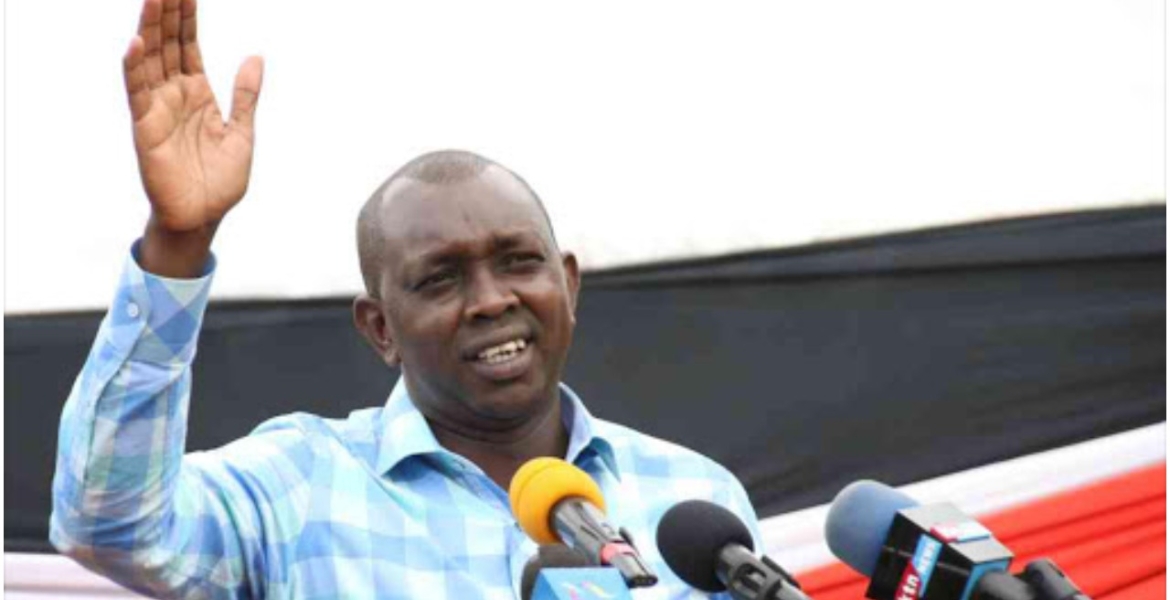 A Nairobi court on Tuesday heard that details on Sudi’s Kenya Certificate of Secondary Education (KCSE) document contradict the records in its database.

Testifying before magistrate Felix Kombo, the head of records and archives at KNEC Nabiki Kashu said the MP’s certificate bears the code of a different school and candidate.

The KNEC official told the court that the index number on the said certificate indicates that Sudi sat for his KCSE exam at Highway Secondary School in Nairobi in 2006.

But the examination body’s records show the index number belonged to a candidate named Obaje Bob Onyango, who wrote his KCSE exam at Parklands Secondary School in 2006.

Sudi, a close ally of Deputy President William Ruto, is charged with forging a KCSE and a diploma certificate, which he claims was awarded by the Kenya Institute of Management.

He is an illiterate law maker! He can also be the minister of education! Something is very wrong with this picture here! It make Euro look really bad; just like he really is!

Kenyans in their ignorance did not see this as a crime...only their loyalty to Ruto matters. Very depressing

Kenyans have had their simple mind bewitched by DP Ruto! But I can assure you that Ruto will never be a president in Kenya! He carries too much baggage to a president; unless 80% of Kenyans a dummies and thieves!

Most of DP Ruto allies has a dirty tag. He added one(Waiguru) more yesterday

Ruto is tied down with thieves who sticks all the way to hell!

Just listen to Waiguru using James 1:5 to justify her theft! Every thief has n Kenya claims to know God! They are even spreading falsehood in public and in churches! The clergy have also been drawn into that corruption! It is hard to believe a preacher these days!

Kenya is loyally screwed if these idiotic thieves are elected! No one passes integrity test in the Ruto’s UDA! I hope Kenyans are watching closely because Ruto will take Kenya to hell!

Alright, good job done. Now move over to his boss and find out how he acquired his PhD while campaigning 24/7 and looting tax payers money.

Hahaha @ Mugikuyu, if they do that this might rival the Pendora papers.
Wow,if this is the start,alot of men,and afew women will need alot of stress relief "outlets".Yea, bars just opened in time...
Its never too late to correct a wrong.Keep on unearthing these injustices,and punish the culprits.
There should not be any statute of limitation on such crimes/offenses. Let those who presented fake papers,and worked till they retired also sweat. Let them know that their wages were illgotten,and its time to make amends.

If you followed the case of the Kabura lady [accomplice of one lady working at NYS then] -she who carried/withdrew money out a bank in gunny bags, then you will understand how corrupt these fellows are.

Did anyone ever thought this crook went to anyone’s school? He didn’t even go to grade 1. He is an elite rate fool stealing from other people - this is UDA true colors! They are all criminals and anyone joining them is a criminal!

Now what? Will sudi resign from being a Kapseret MP? Sudi is an inner circle adviser to Ruto! And Ruto has kept Sudi’s education secret! What a damn presidential candidate!

Highway Secondary School is a fake school started by DP Ruto in Sugoi! That is where all the routs get their certificates; PhD included!

Ask Murkomen where he got his LLB? Same Highway Robbery secondary school!

@ Mitch, actually there is a Highway Secondary School in Nairobi South B.At least it used to be there....In fact it was one of the good day schools in Nairobi back in the day.

Wacha wewe @maxiley! Who else graduated from the Highway school except the fake Sudi of the dirty UDA!

I hope a sharp gay like you is not buying Sudi’s conmanship! Hope you are not minimizing this corruption of stealing certificates simply because U have been bought by Ruto to lie for UDA in Florida!

Think about the simple Kenyans who are getting deceived by these cons and thieves in UDA!

You can take the free wheelbarrow and believe in matakonomics dead economy but don’t simplify Sudi’s criminal conmanship!

BTW: didn’t the Florida cops arrest you pushing a wheelbarrow on the Highway yesterday as you went to work?🤣🤣🤣🤣🤪? How did that go?

@ Lucy, its true there is a Highway secondary school I lived next to it,and my friends attended it.Hey thanks to the magic of the internet.Just google Highway secondary school in Nairobi... You should know that. I am just pointing out that the school exists(somebody was questioning its existence),but whether the crook attended it is another story.
That was not me arrsted,Lucy Tampa bay tribune has me cleared.Apparently adoppelganger,and agoogleganger stole my identity. I suspect that my Kenyan ex is behind all these.She is trying to make Kenyan money hungary women avoid me -the wheelbarrow pusher.I showed the story my Mexican squeeze,and she had the most prolonged laughter,I have heard from her.Some how that cleared her throat.I guess its really true that laughter is medicine.

@maxiley - Them EX’s in Kenya still want your money! But the good thing is the long distance between Kakamega and Florida. It offers you a buffer zone of insults!! And maybe it sure protects from a Loretta Babbitt’s penis bite! (Google that up bro)!

Do You recall the song, “all my ex’s live in Texas”? All mine are in Malindi - and in very happy!

The Kenyan women ex’s are like a leaching tick bro! They will stick to your clothes like a hungry lice to get across the Atlantic Ocean over some damn money issues! And the Kenyan women where you live now are just like girly men! They will even call you “brother mine” when they are loyally screwing you up! The Benjamins have really corrupted them.

You better hold tight to your Mexican baby to fight for you since they got the HOT mouth to reach out and touch your ex’s in Kenya and Florida too🤪😂😂!!

Yes I know - I got one of them pretty Sinorita too! And I’m happy all the way around! Couldn’t be happier!

@ Walid, you have afuture in comedy.If clowns like Omondi can make a killing,you certainly will be the killer.You met my monthly quarter of comedy.

Lord have mercy on this crooked Sudi! And WSR too for his stolen PhD!!

Sudi wrote the Button-Up economics text book! He authored the book to help DP Ruto in That is what WSR children used to get a degree in Falsehood management! DP Ruto has acquired two degrees from the Highway institution of plant anatomy! Please enroll to the Highway College of theft! To perfect your skills of stealing!

Now what for this thief sudi! Go back to grade one and start all over again like a toddler! He ain’t smarter than a5th grader!

No wonder Sudi is hoping Ruto will become the next president so he can be the thief in chief makanga for both Ruto and him! I have known this Rout didn’t have academic papers just by the way the fool talks! I can even feel sorry for him because he should have known better! Now for Ruto to just have kept quiet this long, he is a part of the scheme and no way Ruto did not know his bosom buddy did not sit for KCSE! Ruto is a CROOk!!

Mmmh mr sudi u need to be prosecuted.Can the same idiots reveals raila qualifications juu we hear he never completed high school n he has a welding certificate not degree from Germany.It seems only UDA folks r bin investigated.Kindly chimbua wote then we will support you but if u continue chibuaring only one side we will continue fighting back.Wacha watu wabebe misalaba yao

UDi folks are being investigated because they are thieves @halisi! A cabal of idiots purporting to be what the hell they are not! And, dummies like you @hslisi are just crows cheering on for Kenyans to be destroyed by conmen? Pleas!

Who’s “we”?????? Investigations have been done across the board but you seem to think your UDA folks who are lying mainly to the youths with stupid butt-down economy are good folks!

Look at Ruto himself - Stole Muteshi farm - is this news to you? Stole Weston land, stole 20k land in Laikipia where Ruto’s bandits are killing Kenyans!!!

On top of all that Ruto killed Kenei, yembei, Juma, Musando, etc! If Ruto is killing your own kalenjins, how can we trust him?

You have to learn to see beyond the kalenjin tribe and think Kenya! And by the way, Ruto will never be Kenya’s President! Take that to the Bank, deposit, and revisit the account after August 2022! We do not elect a thief for presidency!!