Uhuru Kenyatta: Why I Deserve a Second Term 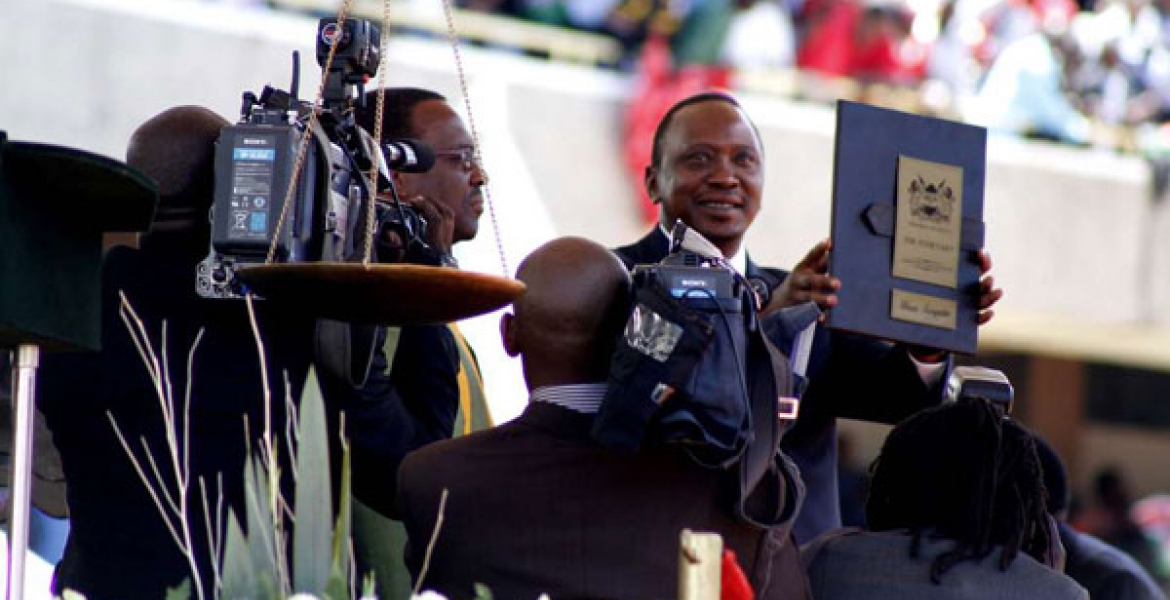 Kenyan President Uhuru Kenyatta’s Op-Ed on his achievements as president in the las four years, and why he deserves a second term as Kenyans prepare to vote in the primaries in April and the General Election on August 8th, 2017.

April 9 is a special and solemn day for me, and for millions of Kenyans. Four years ago, on this day, I took the Oath of Allegiance and the Oath of Solemn Affirmation of Due Execution of Office.

I made these oaths knowing the weight of the responsibility I was assuming, and the profound trust placed on me by the citizens of Kenya.

It has been four years, and with every passing day, the words of that oath have been made manifest in my decisions and actions. I thank God for the sacred opportunity bestowed on me to serve my people and to be part of this moment of growth for Kenya.

I am proud that devolution is now fully implemented. I believe that history will remember my administration’s role in this transformational moment for our country.

Ensuring that counties were established and working required my administration to work round the clock. Our efforts were driven in fulfilment of my oath to obey, preserve, protect and defend our Constitution, and also because I believe that devolution is the best governance model.

To uphold our sovereignty, I have worked hard to transform our security services to be better able to defend the people and every inch of Kenya.

We have sharply expanded the number of police, improved their terms of service knowing that good morale is the ultimate force multiplier.

We have invested in cutting edge technology and equipment, strengthened co-ordination of the security services, and made security a number one priority.

When it comes to terrorism, we have increased the detection and disruption of terrorist plots, ensured co-ordination within government, and with citizens.

As a consequence, the number of attacks has fallen sharply. There are still parts of Kenya that are insecure, and in which criminal violence continues to undermine the physical and economic wellbeing of our people. We are stopping at nothing to bring back security to those afflicted areas.

The upcoming elections will be the most important demonstration of the sovereignty of the people of Kenya. My oaths as President demand that I do my utmost to ensure that these elections are peaceful.

Kenyans have unfortunately been witness to a growing politics of confrontation, in which political disagreements are punctuated by violent confrontation.

This will not be allowed to take root. I have taken, and will continue to take, every step to ensure that the security services are prepared to prevent and counter such violent politics.

No one in Kenya deserves to play outside the rules of our laws and Constitution, no leader or citizen should seek to manipulate the system to bring about division or crisis.

I urge Kenyans to reject such leadership. For my part, I will obey my oath to do justice to all and to work for the security of Kenyans without fear, favour, affection or ill will.

I swore to uphold the dignity of Kenya and all Kenyans. At the core of that dignity is that Kenyans should be treated in a fair and humane way, and that they should have the freedom of lawful action.

In the Catholic Church that I grew up in, that dignity emanates from the human being’s creation in the image and likeness of God, and is inseparable from the individual’s exercise of freedom.

I have sought to uphold that dignity throughout the last four years. For the country, there is little doubt that our dignity and worth in the assembly of nations has been raised. Today, Kenya is a crucial partner in regional peace and security, and in global decision-making.

I have been privileged to see the enormous dignity of our people. Even in difficult conditions, Kenyans hold themselves up with pride and a stubborn hope in the future.

I have been witness to Kenyans insistence that the difficult path toward the attainment of their dreams be continually lit by their leaders. That is the most important responsibility of leadership, and I take it with the greatest seriousness. I am also convinced that poverty too often compromises the dignity of many Kenyans.

That is why we have worked with ambition and boldness to lay the foundations of an economy that is ready to be industrialised and produces the millions of manufacturing jobs needed by Kenyans.

It is not enough to fiddle with the economy, it needs transformation if it is to ever meet the dreams of our people.

The standard gauge railway is a living example of our ambition. The largest investment since our independence has come in on budget and ahead of schedule.

It is the latest technology, built to transform farming and business, and with a sensitivity to the needs of our beautiful wildlife heritage. Kenyans will ride on the train in a few weeks’ time, and they will see a glimpse of the future that is already here.

More and better jobs will be the outcome of my drive to shift our economic gears. Those jobs and the improved incomes they provide, plus the transformation in the rest of our economy from rising manufacturing, value addition, and increased trade, will raise the dignity of millions of our people.

There is more to do, a lot more. Transformation of countries, economies and governance systems takes time.

We have done more in the last four years than most countries have achieved in decades. We have laid the foundation, we have shown that Kenya can come in on schedule and on budget.

The world has noticed, and I want every Kenyan to know that we are on the way to our promised land of opportunity and security.

I am running for President again to complete my part of the task of building this great nation into a shining standard for Africa and the world. So help me God.

Mr Kenyatta is President and Commander-in-Chief of KDF

Please Uhuru, make history like Ndugu Madiba Mandela of South Africa. He served only one term and gave up leadership. Ndugu Mandela unlike you spent 27 years in jail and unlike you opposed the dictatorial regime of the illegal European terrorists who had migrated and settled in South Africa without being invited by the indigenous people.

Ndugu Uhuru, your regime has ben the most corrupt since independence. You have personally admitted that you are totally unable to curb or eliminate " corruption." You have the nerve to ask to be re-elected again! Do you want to totally empty the Kenyan treasury? For the good of the nation, please retire and take care of your wealth exceeding more than a half a million of the US dollars. Please Uhuru, if you really love Kenya, please retire now.

Sorry, I meant half a billion US dollars!

A hypocritical Christian Dr. Chichir Arap Ruto has fathered a child while still married! These are not the kind of role models that we would like our young Kenyans to emulate. He is not fit to hold any public office.

If Jubilee does not drop him from running again, we should tell the entire Jubilee ticket to disappear and let people who are morally clean to run for public office. By the way, is this the same man who stole Muteshi's land? Jubilee, clean your house first before you ruin the entire nation of Kenya. Today, a governor of Alabama had to resign from public office for leading an inappropriate life like Ruto. At least, this governor did not father a child as Ruto did!