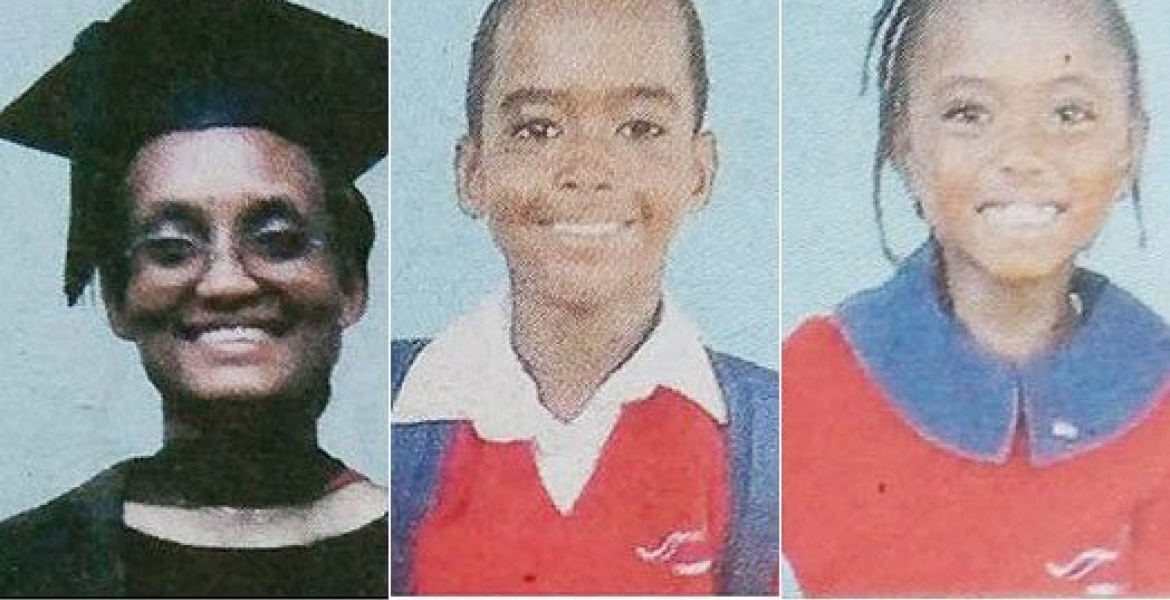 A Kenyan mother and her two children who perished after their house caught fire under mysterious circumstances in Canberra, Australia last month were laid to rest on Friday in an emotional sendoff.

The remains of 45-year-old Anne Wachera Muhoro, her son Ezvin (8) and her daughter Furaha (5)were retrieved by firefighters from their house in Bonner on February 19th, following a suspected arson.

Ezvin and Furaha were fare-welled alongside their mother in a private burial ceremony held at the Norwood Park Crematorium in Gungahlin on Friday morning. The funeral was attended by family and members of the community.

Ms Muhoro's estranged husband, who declined to be named, described his two kids as "playful" and "cheerful", if not a little bit shy.

"Ezvin travelled around the world in 2012. He liked Hong Kong, Singapore and Malaysia. He said he always wanted to go back there."

"[The ceremony] was nice but memories are so strong, They will be greatly missed," he said.

Some of the family members attending the funeral traveled all the way from Kenya.

Police are still investigating the circumstances surrounding the death of the three and are waiting for results of autopsy and other tests carried on their remains.

Detectives handling the case have appealed to anyone with information that might help in the investigations to come forward. Police said a camera footage taken from the estate between midnight of Sunday, February 18th and 8.45 am Monday, could be of great help.

Ms Muhoro had been working as a software engineer in Canberra and was set to attend a child custody hearing on the day of her death at the Family Court, but failed to show up.

Her estranged husband had moved to court seeking custody of their children. One suspect was apprehended the day after the fire, but was later released.

In 2011, a man identified as George Munene filed an online petition on a website (change.org) against Ms Muhoro, accusing her of denying him a 50/50 child custody of their son, Ezvin Munene Mugera.

“Custody battles are rife and allegations of domestic violence have been misused (by a few women) to gain an upper hand in custody and property settlement battles," George said in the brief petition.

, @ Daniel Nganga,I take it that the God you refer to is the God of All knowing, Unlimited power,and he is Omnipresent.Now tell me why he does not use all his attributes to thwart even before it reeks havoc on his children?Is n't that the time to do something?Please understand that Iam not being flippant here. Just curious.

Pole sana to the innocent kids who Mayb died coz of the mother n father bullshit.I said it here in another story in USA other week where the dude might have killed his kids n wife that please if ur not getting along together please divorce n u MUST agree on how to share the kids responsibility 50/50 without misusing or abusing @other.Dont force each other to pay child support if u can b able to agree together on how to raise yr kids!Talk to each other who can have custody’s of the kids!If u have Properties together n u surely struggled to buy them together please agree on how to sell them off n divide the cash in a mature way then mnaachana mos mos but I know 100% that many women want to steal everything especially if the house ur leaving u bot together she wants u out n still b paying half of the mortgage.So when we become mature we can b able to handle this things in a mature way otherwise we will continue to experience such things.

Haiya ati nini... Sasa you know some Wamama wakenya kama mimi, took off from my with nothing mtoto pekeyake...in these USA .. we had a house rrsp name them.. the dude was cheating... he had a thread of women... I actaully got emails the lady and my hubby were communicating... thought that was nothing.. I got western union he was sending to another lady in jamhuri.. nikamuliza no wonder I don't get my conjuguar rights coz uko na mpango wa kando those are the few I got to know when I packed my belongings and I said fuck your penis, fuck the money, fuck the RRsp, I work hard same with home to put up beautiful home and a ridiculously cute kiddo. I was like the same way I came from jamhuri with a buggage and no allowance the same way I will vacate these hard earned well furnished nyumba in USA . The only extra I had from these was mtoto. Well today after couple yrs I have come out victorious with a home of my own another mtoto..

When I thought of well wacha maybe niitishe support.. hata ya mtoto jamaaa aka sema wewe nwizi nikamshow haiya hautaki Huyu mtoi awe na maisha ya kuwa hata na Hera yakusoma akimaliza highschool, they guy was no penny my choice I said neither did I get the Penni's your choice. Never heard from him... we flourished with my kiddo, went back to school on my own terms.. was honour lol student, got hired, worked ma doubles na matripples. Today I pick when to work... no more doubles coz I used my brain.... usitegemee property machie kila kitu... start over. Do you good for taking off with you ka life ma ze.... hiiiiii states u can make it as Long as u got determination . The dude the other day saw me drive my Audi... and he even test drove it. I took a pic of him testing my engine... (my car engine) heee nikasema y mungu ni mengi.... Sasa yeye you basement... nikamuuliza what happened to your nyumba... akaanza huku states it can be hard........ inwardly I shook my head nikasema kimbishana na kina warembo wakuonyesha how they love u ... u fish your dollar when u get broke they move on and u move out of ur comfort zone ... anyways wakanda pple let's use wha our God gave us upstairs wisely.

And you wamama wakenya.... tafadhali wacheni drama na ushamba wa villager.. mama mmoja aki devorce if u don't want to support stop talking behind there back... u got sooo much in life .. like now how did my big behind have to do with your mouth, why did u say am very proud, what part of my bedroom did u occupy in my house to know what went on . Pleeeese wacheni udaku ( my devorce my choice) and right now after Mia ka mingi... why do u still want to touch base.! Plse don't I have no rm in my Audi for u..

Wow....I agree with you,many women wanangangana na manyumba as huku after divorce,instead of looking up to God who will help them stand again...and prosper,,,I did not force anyone for child support,if he doesn't want to pay,,Because my God is bigger and rich and he turns life around...in most cases most women in cases while divorcing wanakuanga na mpango wa kando who push them to give their husbands sleepless night,,wanaume wa diaspora wako na shida