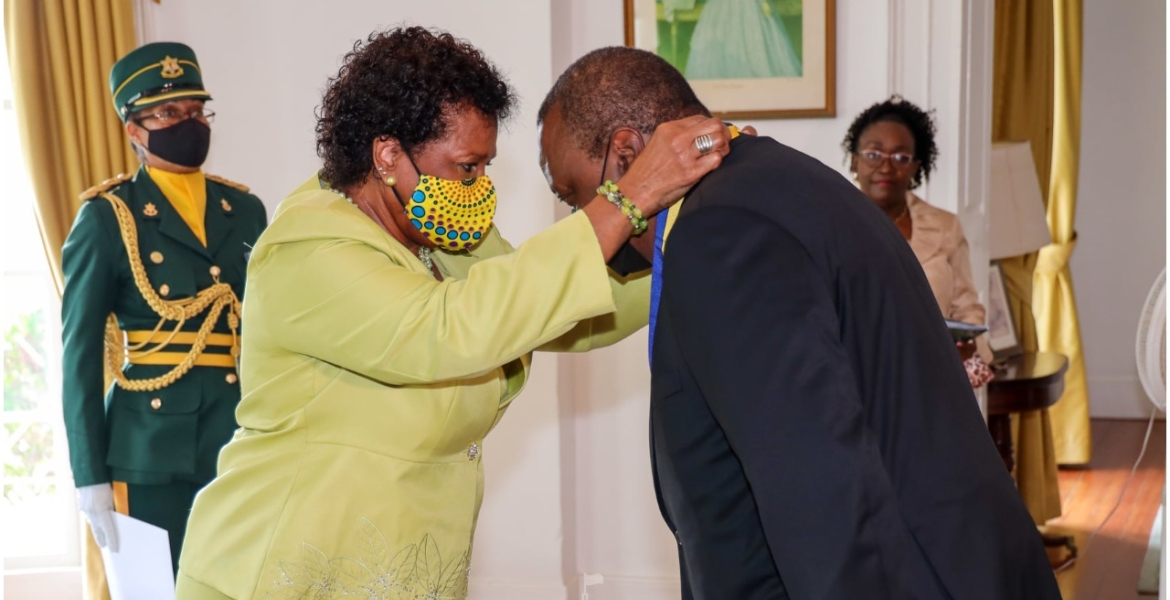 President Kenyatta has been conferred the 'Order of Freedom of Barbados' award by the Barbadian government.

Kenyatta was feted on Wednesday for his leading role in the promotion of global trade and strengthening of relations between African and Caribbean countries.

The 'Order of Freedom of Barbados' is the highest State honor conferred on outstanding Barbadian citizens and foreigners for extraordinary service to Barbados, Caribbean Diaspora, or to humanity at large. The award was presented to President Kenyatta by the Barbados Governor General Dame Sandra Mason at Government House in Bridgetown.

“The accolade of honorary Member of the Order of the Freedom of Barbados is being conferred on the President of the Republic of Kenya for his outstanding accomplishment as a global leader, his commitment to enhancing global trade and sustainable development, and efforts to strengthen the bonds of cooperation and friendship between Kenya and CARICOM, in particular the bilateral relationship between Kenya and Barbados,” the citation read in part.

Speaking after receiving the award, Kenyatta termed the honor as a great sign of the growing ties between Kenya and Barbados.

He added that the award also signifies the work he and Prime Minister Mia Mottley have been doing to strengthen the ties between Africa and the Caribbean Community and Common Market (CARICOM) region.

“Our desire and objective is to see all people of African descent come together, be able to stand together, and be able to fight for our respective rights, freedoms, and our space in global affairs,” said Kenyatta.

“This, I believe, is the spirit that has brought me to Barbados, it is the spirit that continues to encourage me to continue with the work that we have started. It is really my hope and prayer that as a result of the engagements we have had, we will see the strengthening and re-establishment of the Pan-Africanism – the spirit that brought us our independence.”

African countries are much better off than this Caribbean nations who depend on tourism to survive but I digressDo they not get BBC over there this person you are heaping with fake accolades has stashed away stolen funds .His mother is still receiving over 500,000 a month from the govt because she was married to a man who died over 40 years ago.That family owns more land in Kenya than any other most of which was stolen and they continue to steal to this day .He has done a good job of shining a light on his fellow thief arap Ruto while we all know he is the biggest thief of them all.

Hmmm.....
Nature is so wonderful than the word wonderful can express itself.
Anyone remembers a physics teacher nicknamed "ticker timer"??!!!
Please comment below

Why should Uhuru continue as Kenya’s president if he has no confidence with the country’s banking institutions?He cannot even sack finance Minister-Yattani whose son was arrested smuggling $4m at JKIA a week ago.It’s unfortunate that some hungry bongoinzi/billionaires are still defending jambazi Uhuru despite his confirmation of operating offshore accounts.Some believe they co-own the looting agencies with expired muuaji Kamau’s family by being AGikuyu while others are imaginary “counting” dollars handed to his in-law,Raychelle Keliech ati ni ya Omera wote including celebrity,I phone4G(salimika Nyako).

These Caribbean countries should stop letting government officials who loot in Africa hide the looted funds in their countries.

He will awarded kenya's top thief honor for corruption and sending the money offshore.

The Black man should stop being in a cocoon created by Otto Von Bismark et al.

Move out and be the Vascos of science, business...

Aliko and Strive.. are snippets of Black entrepreneurship. The Forbes list forgets that the richest man in the world is...not on their list!

All said and done on Mwakilishi…mta do?? Damn you all key board worriors lol! Vitu kwa ground ni different. Stay rich or die trying.

" Charity begins at home"
Truth, revelation and restoration is on the horizon.
Soon our heroes will not be pointed out by foreigners, we will point them out as our heroes and they will truly represent who we are and what our creator intended.
May what is done in heaven be done on earth.
We are all patiently waiting for change of season!!